Images of Enlightenment – The Buddhist Mandala 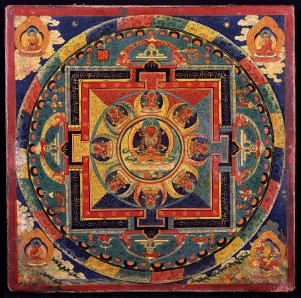 Because many colourful collections of mandalas are easily accessible nowadays in public art museums as well as in digital art galleries, it is easy to fall into common misconceptions. These peculiar ‘objects’, which can easily be mistaken for some kind of ‘art- form’, are actually among the finest remnants of the practical occultism found in the East.

The mandalas belong to a most sacred form of art, the function of which is to represent symbolically and sacramentally a transcendental reality. In this instance, this reality is nothing less than that state of nirvanic beatitude which is the summit of the Buddhist quest. The Indo-Tibetan canon of pictorial representations attributes the origins of painting to the Buddha himself and the images of Buddha are said to be sacred crystallizations of the superhuman virtue of Enlightenment.

The Sanskrit term Mandala is often translated as ‘circle of symbolic forms’. The basic Buddhist Mandala design has five symbolic forms. Each of these is an archetypal image: the central one is ‘Reality’ itself and the other four represent principal aspects of that reality.

The mandala can also be understood as a sacred realm containing symbols and images that depict aspects of the enlightened psycho-physical ‘personality’ of the Buddha. It is a pictorial aid for those who want to gain ritual access to those aspects (‘powers’) of the Enlightened Mind. They are instruments of communication, which are still used today, to impart profound truths.

The greatest mandalas are those created and held in the mind of the practitioner during meditation. These types of visualizations, the prototypes of which were recorded (i.e. objectified in pictorial forms) by the Siddhas (those who had gained extraordinary mind powers) take the name of Sadhanas. The mandala images which spring forth during these Sadhanas come from a level of consciousness

that cannot be reached by the ordinary process of thought. Their function is to ‘create’ bridges between ‘normal’ everyday states of consciousness and super-conscious states. Through these visualizations, the practitioner is invited to imagine his future state of being, the Buddha state, and by imagining it, to become that state.

Read the original article on http://www.newacropolisuk.org/download.php?id=18&src=home