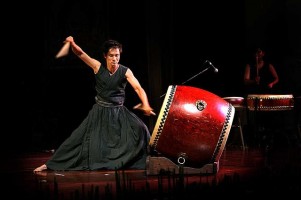 Once upon a time there was a drummer living in a small country village. He heard there was going to be a fair in the city of Benares. So he decided to go there and earn some money by playing his drums. He took his son along to accompany him when playing music written for two sets of drums.

The two drummers, father and son, went to Benares Fair. They were very successful. Everyone liked their drum playing and gave generously to them. When the fair was over they began the trip home to their little village.

On the way they had to go through a dark forest. It was very dangerous because of muggers who robbed the travellers.

The drummer boy wanted to protect his father and himself from the muggers. So he beat his drums as loudly as he could, without stopping. “The more noise, the better!” he thought.

The drummer man took his son aside. He explained to him that when large groups passed by, especially royal processions, they were in the habit of beating drums. They did this at regular intervals, in a very dignified manner, as if they feared no one. They would beat a drum roll, remain silent, then beat again with a flourish, and so on. He told his son to do likewise, to fool the muggers into thinking there was a powerful lord passing by.

But the boy ignored his father’s advice. He thought he knew best. “The more noise, the better!” he thought.

Meanwhile, a gang of muggers heard the boy’s drumming. At first they thought it must be a powerful rich man approaching, with heavy security. But then they heard the drumming continue in a wild fashion without stopping. They realised that it sounded frantic, like a frightened little dog barking at a calm big dog.

So they went to investigate and found only the father and son. They beat them up, robbed all their hard-earned money, and escaped into the forest.

The moral is: Overdoing leads to a downfall.