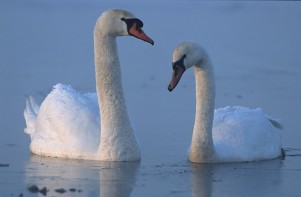 One day when Prince Siddhartha and his cousin Devadatta were walking in the woods, they saw a swan. Quickly, Devadatta drew his bow and shot the swan down. Siddhartha rushed to the wounded swan and pulled out the arrow. He held the bird in his arms and caressed it.

Devadatta angrily shouted at Prince Siddhartha, “Give me the swan. I shot it. It belongs to me!”

“I shall never give it to you, You will only kill it!” said the prince firmly. “Let’s ask the ministers of the court and let them decide.”

The ministers all had different views. Some said, “The swan should be given to Devadatta.” Others said, “It should go to Prince Siddhartha.” One wise minister stood up and said, “A life belongs to one who saves it, not to one who will destroy it. The swan goes to the prince.”
Prince Siddhartha took care of the swan until it could fly again. Then he turned it loose so it could live freely with its own kind.