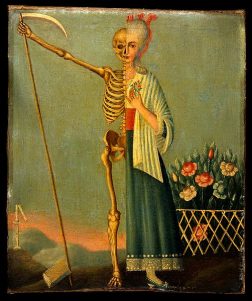 Life and death, like all opposites, are simply two sides of the same coin. As J.A. Livraga says in his book Thebes, in reality there is “only One Life, which glides along on its two feet, life and death.” Sometimes life is manifest, visible. At other times it is unmanifest, invisible. A tangible image of this in Nature is the tree. During summer it is full of leaves, flowers and fruits; in winter, it is bare of all those attributes and appears to be dead; but we know from experience that it will come to life again in spring.

So with the human being: we are born, we grow and appear to die. But perhaps, following natural law, we do not really die. Perhaps our consciousness merely transfers to an inner plane, remains in that state for a ‘winter’ period and then returns to life in a new spring. This teaching of an abiding soul which incarnates and ‘dis-incarnates’ myriads of times in search of experience and perfection is virtually universal. It is not confined to Eastern philosophy, but was also held by Pythagoras, Plato, Plotinus and many others in the West.

This view of life as a continuum in which the consciousness passes almost seamlessly from visible to invisible and back again would logically give rise to a certain way of looking at life and death: a new philosophy, not in the sense that it has never existed before, but in the sense that it is unusual today, where people tend to be either ‘secular’ or ‘religious’.

The foundation of this new philosophy would be that we give priority to spirit over matter and see the body as the vehicle of the soul. As a result, the purpose of life would not simply be to live as long as possible in the maximum state of comfort, but to make sure the soul has the experiences it needs in order to perfect itself.

There is a natural tendency in the mortal personality to avoid risk and stay within its comfort zone. The new philosophy of life would imply living life to the full – not in the sense of indulging all our desires, but in the sense of doing whatever it takes to express our soul-nature in this world, realizing our potential, contributing to society and living with joy. It implies a philosophy of risk, not foolhardiness, but going beyond our comfort zone in order to expand the limits of our being to the infinite.

A new philosophy of death would be based on a natural understanding of death as the portal to a different level of reality, which many ancient cultures called the ‘world of the gods’. Not to be afraid of that invisible and – to all accounts – ‘higher’  dimension, but also to accept it and look forward to it joyfully, in the same way that we look forward to tomorrow with optimism and serenity, even if we don’t know exactly what tomorrow will bring. But we do know that it will bring opportunities and experiences.

I would like to end with the example of the Greek philosopher Socrates. While alive he lived his life with intensity and a great sense of humour. He was brave, witty and full of life. At the same time he took his mission – to awaken the people of Athens from their spiritual lethargy – very seriously.

As a result of his challenges to the thinking of his day, he was sentenced to death. As he awaited his fate in his prison cell, he spoke to his friends and disciples about life and death, pleasure and pain. He gave them a logical demonstration of the pre-existence of the soul and its survival after death, and ended by telling them how much he was looking forward to meeting other interesting people who had died before him – and questioning them about their actions and opinions – as he had always done while living on Earth.

He showed, through this attitude, that for him there was little difference between this world and the next, and that the choice is not between being a religious ascetic or an atheist. One can happily stand between and above those two extremes and be a ‘natural philosopher’.