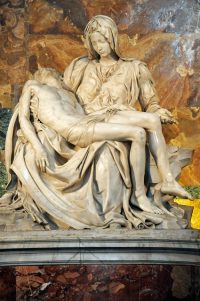 What is life, what is death, is there a rebirth? These are the big questions arising with the first spark of self-awareness. But what are the answers?

Michelangelo (b.1475 – d.1564) was exploring profound Christian ideas often in a mystical form with a strong influence of Neoplatonic philosophy. In his youth he was most likely educated at the Platonic Academy, a philosophical school founded by Cosimo Medici in Florence, which gave birth to the Renaissance movement. He was also a follower of a short-lived ‘Spirituali’ movement (1530-1560) in the Catholic Church, whose devotional practices included meditation on the death of Christ. Many know him as a sculptor, painter or architect, but he was also a poet who wrote more than three hundred poems. In one of his poems he wrote:

It is only with fire that a smith can shape iron

into a beautiful and cherished work

in accordance with his concept,

and without fire no craftsman can refine his gold

and bring it to the highest quality;

nor can the unique phoenix recover life

unless it first be burned;

likewise, if I die by burning,

I hope to rise again to a purer life

among those whom death enriches

Michelangelo presented through art many philosophical ideas about life. A very popular motif in the Renaissance was Hercules who has transformed himself through the heroic spirit into a semi-divine mortal. Hercules’ labours show us the effort and steps that each mortal has to go through to recover their innate divine nature. Michelangelo provided sketches of how a hero has to deal first with irrational forces within himself (the Nemean Lion, the Giant Antaeus, the many-headed monster Hydra), and eventually move from carnal love (Tityus) to divine love (Ganymede).

Bill Viola (b.1951) is a contemporary video artist born in New York. He lived and worked in Florence briefly in his twenties and later in his life travelled extensively around the world. One of the insights from his comparative studies emerged from these experiences: “I began to be aware of a deeper tradition, an undercurrent stretching across history and cultures… the ancient spiritual tradition that’s concerned with self-knowledge that we can see in ancient Greece and all the great religions, in early Christianity as well as Siberian shamanism, what Aldous Huxley called the ‘perennial philosophy’, the link between East and West.” (2)

Viola as a visual artist understood the Platonic concept of an image. “I am interested not so much in the image whose source lies in the phenomenal world, but rather the image wholly determined by some inner realisation.” (3) This is why he was drawn towards sacred art as a carrier of another dimension. In his videos we see a lot of water, he is playing with light and time and offers us another view of reality, something very familiar to us, but challenging our perception, which will result in a different inner experience. The observer often becomes shattered, as with the concept of Buddhist impermanence. The mortality of the body is the mortality of the world we live in, which is constantly passing from one stage into another. Such is the nature of existence. Everything is changing and the reality we perceive through our senses becomes very unstable, but the beauty can still shine through.

When we contemplate these profound ideas we have first to recognise what is real and what is not real. Philosophically what is more real is the cause, rather than its effect. Is our body an effect of life or a cause of life? Some philosophers would refer to a body as a vehicle for life, enabling us to go through experience, like a car which provides us with a means of transportation. But who is the driver? Many traditions would identify it with the soul. One of the soul’s powers would be a vivifying or animating principle, which would bring the ability to move inanimate matter. Philosophically we can move in different directions, we could be pulled ‘downwards’, trapped by irrational drives, or ‘upwards’ into the realm of wisdom and virtues.

This dual nature is very difficult to handle, as one who is ‘below’ has difficulties seeing what is ‘above’. It gets even harder when one can’t even notice when one is ‘below’. Eventually there must be a gradual ascent. But what makes this ascent happen? Could it be that this power is called Love? Could love be a pull upwards? Is this the core of the philosophical Platonic idea that inspires the artist to strive towards beauty, which is naturally followed by love?

Both artists, Michelangelo and Viola, when contemplating big questions about life and death five centuries apart, used art as an answer, which is not a direct answer, but is born through our experience. It is only through the experience of an ascent that we can reach beyond image, where life is in continuous flow. This is a soulful place, a place of rebirth.