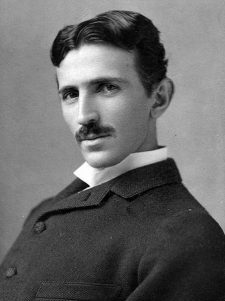 Nikola Tesla was probably one of the greatest minds of the 19th and 20th centuries, yet his name is rarely associated with one of his many inventions, AC electric power. When we mention the discovery of electricity, or how we came to use it in our modern civilisation, we think first of Thomas Edison, Michael Faraday, Werner Von Siemens or even Benjamin Franklin – even if the latter did only a few experiments, his most famous one being his attempt to discover whether lightning was made of electricity.

Tesla, born in the village of Smiljan (now in modern day Croatia) in 1856, was attracted to mathematics and physics at an early age and soon turned towards a new field of physics, namely electricity and electromagnetism. After helping to improve the tramways of Zagreb he emigrated to the US, the land of opportunity. There he worked under Thomas Edison. Quickly their personalities and work methods clashed and Tesla left to set up his own workshop. Edison had already established his DC patent while Tesla had other ideas and could see a greater potential in AC power.

Tesla then designed and sold the patent for an AC generator to George Westinghouse in 1885. With this money he was able to invest in his own laboratory and explore further the potential of AC power, especially the wireless capabilities of an AC signal.

Edison promoted the use of DC power, understandably as he owned most of the patents for its use, whilst at the same time demonising AC power as dangerous for users. Whilst it was easy to produce and use DC power it was not cheap to transport as it required thick copper cables and generated heavy losses in heat. AC power, on the other hand, was relatively easy to produce, slightly more difficult to use, but very easy to transport due to another invention, the transformer. This new invention would allow the voltage of the network to be increased. By increasing the voltage you naturally reduce the current and the losses in the cables during transport. However, the losses were still significant as the voltage couldn’t be increased indefinitely, but it is the electric power distribution system we still use today.

Tesla wasn’t satisfied with the wire-based transport system and focused his energy and attention on a wireless system. He created the Tesla tower close to his laboratory on Long Island in 1901. The tower was designed to transmit up to 10 million horse power of electricity through the air, using a very low frequency AC signal. The frequency in question was close to the Schumann resonance (7.83 Hertz or cycles per second), which took Schumann himself until 1952 to discover! The project was originally supported by J.P. Morgan but he quickly withdrew when he realised that the idea behind the Tesla tower was to provide free wireless electricity. Unfortunately, with a lack of funding and Tesla’s laboratory going more and more into debt, the project was abandoned and the tower dismantled in 1917.

During the last two decades of his life he withdrew to his home and died in 1938. It is said that he continued working relentlessly and kept for himself over 2,000 inventions and patents. Nikola Tesla had an incredible mind and was ahead of his time. He laid the foundation for the forward thinking scientific minds of the next generations, who are always looking for new and better possibilities to improve humanity’s condition on Earth.