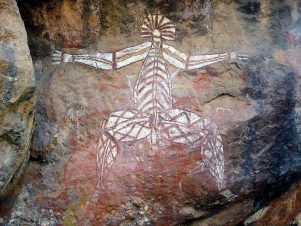 Aboriginal Australians are the most ancient continuous civilization on Earth. Their ancestors, who first arrived on the the continent about 70,000 years ago, were the first humans to cross an ocean. Split into hundreds of social groups each with its own tribal territory and dialect, a cumulative population of 1.6 billion people has been estimated to have lived in Australia supported by the land prior to British colonization.

Aborigine culture developed in the context of a nomadic hunter-gatherer lifestyle. They maintained the tradition of wandering long after most people of the world had settled down to the sedentary life of farm, village or town.

Their wide practical knowledge, accumulated over thousands of years of experiment and observation, enabled them to harvest food without exhausting effort. The frequency with which they moved camp and the exact timing of their movements reflected their understanding of climate, winds, marine life, insect life, the maturing of plants and the habits of wild animals. Their knowledge of the land and all that grew from it was supplemented by a spiritual belief that the earth would not continue to be productive unless they obeyed its rules and its deities. One of the aims of their religious ceremonies and many of their taboos was to maintain the fertility of the land and its creatures.

The Aborigine religio-cultural worldview, relevant to generations both past and present, pivots on the Dreamtime, the ever-present moment of creation. It explains how in the beginning Ancestor Beings travelled through the land shaping the animals, plants, rocks and other forms of the country that we know today. Eventually they settled in a place that was important to them where they still inhabit the land. These are the sacred places of Aborigine culture and have special properties. Because the Ancestors did not disappear at the end of the Dreaming, but remained in these sacred sites, the Dreaming is never-ending, linking the past and the present, the people and the land.

By virtue of birth there is a spiritual link between a person and a specific site or a part of the country. Dreaming stories pass on very important knowledge to later generations. Through ceremonial song, dance, painting, carving and storytelling, Aborigines have maintained a link with the Dreaming from ancient times to today. Their spiritual and cultural connection to the land obliges Aborigines to look after cultural sites which are living museums of their ancestors and include dreaming sites, archeological sites, water holes and burial grounds.

It has been with difficulty that Western society recognized the kind of abundance and autonomy in which aboriginal Australians had lived prior to British colonization. We often value the material success of ancient empires by their surviving monuments and the remains of their temples and city walls. Accumulation of property is, in our eyes, a sign of success.

Having long lost sight of the unchanging unity of life which underlies the multiplicity of creation, the whole planet is now faced with the effects of the destruction that capitalism and colonialism have caused to our earth: global warming, widespread health problems, education and social issues, ill governance, to name just a few.

Regardless of the oppression of colonialism and attempted genocide of their society, Aborigines have been able to identify with, value and pass on their culture, adapting and persisting through the struggle.

It is time we realized there is much we can learn from a society as successful as the aboriginal Australian if we are to regain the ideal pattern of life we have forgotten. After all, theirs is a knowledge that, through over 70,000 years of compiling and refining, has the greatest potential to sustain human life on this planet.