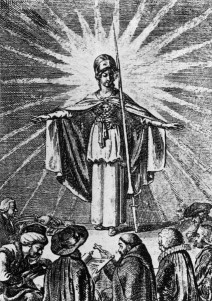 Minerva as a symbol of enlightened wisdom protects the believers of all religions (Daniel Chodowiecki, 1791

It seems strange that fundamentalism and fanaticism should be growing stronger in the 21st century when, according to past predictions, we should be entering an age of enlightened progress and rational understanding. But the rise of fundamentalism is due in part to the failure of rationalism to cater for humanity’s deeper spiritual needs.

Fundamentalists have always existed. In a text from ancient India – the Bhagavad Gita – we find a phrase which sums up this attitude: “There are men who have no vision, and yet they speak many words. They follow the letter of the Vedas, and they say: ‘there is nothing but this’. Their soul is warped with selfish desires, and their heaven is a selfish desire”.

The reason that fundamentalism is growing stronger today is perhaps because people are looking for certainty in an uncertain world. The secular society produces instability. By breaking down traditional beliefs and not replacing them with new ones, it opens the way to the breakdown of society and the disorientation of individuals. However, fundamentalism is not a real solution to this problem. On the contrary, it actually accelerates the process of disintegration, by promoting hostility and warfare.

Tolerance is a far better approach, but what is meant by tolerance?
It cannot just mean to tolerate everything, because that would include tolerating all kinds of evils. Rather, it is about accepting ‘the other’; accepting that people are different and allowing them to be so. A tolerant person can even see something valid in fundamentalism, which is the search for stability and unity (necessary factors in life, but not the only ones), while strongly criticising the route it takes towards those aims.

It is not the case, as some people suggest, that religions are by nature dogmatic and exclusive. In ancient Egypt or in Rome, for example, many different religions happily co-existed. History shows that it is possible to be religious and not fanatical.

But it is also important to practise certain timeless and universal values, which we can discover in many different systems of thought. For example:

Do not do to others what you would not like others to do to you. (Confucius);

As you sow, so shall you reap ( Jesus) – identical to the Eastern doctrine of Karma;

Do not resort to violence, do not be greedy (Egyptian & Jewish traditions).

As the Renaissance philosopher Giordano Bruno said, it is ultimately more important to practise what we preach than to believe in articles of faith.

However, to try to make a ‘secular religion’ out of such values does
not work. It makes no appeal to the imagination, to the symbolic consciousness of the human being. It was tried in France at the time of the Revolution, with a ‘Temple to Reason’, and signally failed.

Another important step would be to try to restore healthy customs, as these act as a stabilising influence in society and create an atmosphere of mutual respect and solidarity. Such principles as moderation in eating and drinking, politeness, cleanliness, respect between the generations and the sexes, and honesty in commerce and public office would help prevent people from looking for more drastic, fundamentalist, revolutionary or reactionary solutions.

But again, such rules are inadequate on their own. The human being needs to be inspired by higher ideals of a common spiritual root of humanity, a divine spark or a soul that we all share in common. Reason and common sense, while extremely important, are not enough.

In times when fundamentalism and fanaticism are on the rise, it is necessary for philosophical and tolerant attitudes to increase in order to counterbalance this negative trend. Even if, realistically, we cannot stop the wave of intolerance right now, because it has already been set in motion, we can lay the bases for a more enlightened tomorrow, just as certain medieval and renaissance thinkers created the foundations for the modern world.

If any images used in this article are in violation of a copyright, please get in touch with webmaster@acropolis.org.in as soon as possible. Appropriate action will be taken.
Image References
By Jamesh Steakley | Wikimedia Commons | CC BY PD

Read the original article on http://www.newacropolisuk.org/download.php?id=18&src=home