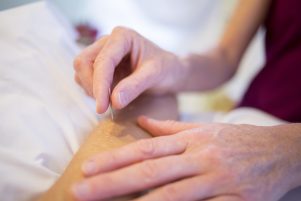 In recent decades, there has been a revival of acupuncture and, together with other alternative and complementary medicines, it has become popular among medical students all over the world . For most people, acupuncture means stimulation of certain points on the body that can ease symptoms of sickness. But what makes this old healing method so attractive in the age of high-tech medical science?

No one knows how or when acupuncture began, but archaeologists have found traditional healing instruments, such as stone and bone needles, from the Shang Period (1766-1122 BC) in China. It is supposed that the technique is as old as medical science itself in China. The oldest written medical book, The Yellow Emperor’s Classic of Internal Medicine from about 100 BC, also mentions acupuncture as a main therapy and provides a detailed description of 160 classical points along with meridians (channels) and a variety of needles.

Book printing in China was very helpful in spreading the knowledge throughout the country. There are records from the 11th century AD that Wang Weiyi, the famous physician from the Song dynasty, tested his students with man-sized bronze figures that were filled with water and covered with wax. If the medical aspirants put the needles in the right places during the exam, water spouted from the statue.

The main difference between the Eastern and the Western styles of medicine lies in how they regard the human being. In ancient China, mankind is seen as part of the cosmic and energetic world, not just an independent entity. In the West, physicians focused more on the body and the organs, while in the East, the focus was on the environment and the whole person, with their mental, emotional and energetic conditions.

The human being symbolizes the harmony between heaven and earth, or between the two poles, yin and yang. Yin represents calmness, cold, the passive side, while yang represents the active, the hot, dynamism. Yin and Yang are changing all the time, as day follows night, and night follows day, as expressed in the Tai-Chi symbol. There are also five phases, which are associated with the five elements: wood, fire, metal, water and earth. These phases or elements explain the connection between the internal organs and the cosmic cycles. The organs and the energetic conditions of the body can be matched with the elements.

When the human being is in harmony with himself and his environment (and the cosmos), he is healthy; if not, there is an imbalance, which appears in the form of an illness. The energy that vitalizes people is the qi, the life force, which flows from the body’s primary organs to other parts, like the skin, muscles, bones, etc. Acupuncture points that can be found mainly on the 12 meridians and on the ‘extraordinary points’ can be stimulated by different needles to redress the energetic balance in the body.

To understand the cause of the illness the doctor needs to be aware of his patient in every aspect, because even if there may be symptoms that are common to many people, each person is different and unique. To carry out a proper diagnosis is the key to curing the patient efficiently. Together with acupuncture, herbs and exercises are prescribed for the patient as well, so the combination of these treatments can lead the patient to back to health.

There are critical voices in the West that claim that acupuncture, like all alternative treatments, is not proven, and not so effective as modern medical science. But it seems that the symptoms of many patients, especially those who suffer from chronic diseases, such as rheumatism, allergies, vertigo or sleep disorders, can be eased by acupuncture. In the UK, acupuncture is used mainly in pain clinics and hospices, but in some GP clinics as well. Each year, 2.3 million acupuncture treatments are administered in the country. This amount of treatments indicates that acupuncture has a place in the modern medical system, as the old healing technique it uses is based on wisdom that never goes out of fashion.