The Philosophy of Climbing 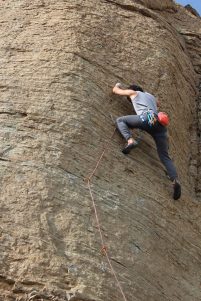 “I am a wanderer and mountain-climber, said he to his heart, I love not the plains, and it seemeth I cannot long sit still.
And whatever may still overtake me as fate and experience  a wandering will be therein, and a mountain-climbing: in the end one experienceth only oneself.”

Nietzsche (1844–1900) was a German philosopher, poet and philologist whose work has exerted a profound influence on modern intellectual history. Nietzche, whose ideas included Eternal Return and Perspectivism, was also a proponent of Amor Fati – the love of fate or, in more ‘perspectivist’ terms, the love of one’s own fate.

Amor Fati is not so much a submission to fate as an attitude in which one can accommodate and accept all life’s experiences, whether prosperity or suffering, as good. Nietzsche’s time in, and reverence for the Swiss Alps, the proximity of which was gifted through his professorship of Philology at Basel University, did much to develop this concept.

So what can we make of not merely just accepting, but coming to love, one’s own fate? How do we discern between embracing fate and pursuing destiny, walking the path of high-risk versus that of pure recklessness? And why does mountain symbology marry itself so well to the notion of fate and higher ideals?

Throughout mythical, historical and popular culture, we see many examples of the ascetic, the sage, and the hero who overcomes fear and establishes a state of Amor Fati. The resulting ‘super-man’ (or Übermensch, to use Nietzsche’s term) is then tested in the precarious ascent of a holy mountain or in undertaking contemplation in the caverns and hermitages of the cliff-edge – to return at some point with wisdom. But the wisdom of what?

For many, the modern equivalent of this archetype is expressed in the explorer and extreme sportsperson. But these contemporaries are rarely revered as saviours, saintly or pious. In Robert Mcfarlane’s book ‘Mountains of Mind; a History of Fascination’ he puts forward a commonly held stigmatism – “Those who travel to mountain-tops are half in love with themselves, and half in love with oblivion.” And in the mountain climber specifically, whose choices and actions are often viewed as foolhardy, even selfish, do we conclude that climbers are just nihilists? Is this enough to explain the addiction and fascination? Or is there another motivation, one that is not so forthcoming in appearance? In climbing, can we find something more profound – the philosophical answers to the nature of will, fate and existence?

“There are moments on high cold mountains, life-enhancing moments… they are fragile transient times when the borders between living and dying seem to overlap, when the past and future cease to exist and you are free.”
― Joe Simpson (British mountaineer)

So why does the climber climb? Is it for freedom? It could be argued that with all its dependency on conditions – weather, logistics, technical equipment, the personal limitations of body and mind – the mountain is a place of constraint, not freedom.

Perhaps Joe Simpson’s musings give us some clues – that climbers experience freedom because of, and not in spite of, the constraints and dangers put upon them.

The Stoic Philosopher, Epictetus – himself a former slave – argued that being a slave did not deny him freedom in the most fundamental sense. Epictetus proposed that there are many things out of our control, and if we do not recognise this, we become a true slave, and freedom is lost.

Stoics, who are seen as the torchbearers of Amor Fati, perceive a wise person as someone who moves through life seemingly unimpeded by the things that cause distress to others, to a state of harmony with oneself and the world.

Mountains, and the act of ascending them, are one of the clearest examples where there is so much out of one’s control. The wise climber, however, knows their best ‘piece of gear’ is their Will, applied through reason, in accord with nature.

“Freedom in climbing is about knowing oneself and knowing one’s environment well enough that one desires to do exactly what one can… freedom does not result from having many options; instead, it is a result of desiring precisely those things the mountain allows.”
― Kevin Krein, Climbing: Philosophy for Everyone

In climbing, there is a term used to describe the hardest, most risky move of the route – the Crux. Moving past the point of retreat (the crux), the climber transcends. They have come to know Amor Fati and have harmonised their nature with that of the mountain.

Then, the glory of ‘summiting’ is not in discovering God or one’s “true self” at the top, but in what happened on the way up. When we are truly free, we stop clinging and start climbing.

Article References
1.Thus Spake Zarathustra: A book for all and none by Friedrich Nietzsche. (Translator: Thomas Common). 2008 2.Mountains of the Mind: A History of a Fascination by Robert Macfarlane, 2003 The Game of Ghosts by Joe Simpson, 1994 3.Climbing: Philosophy for Everyone, by Kevin Krein, 2010
Tags: acceptance, Amor Fati, climbing, fate, mountains, Nietzsche