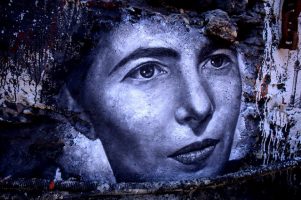 From the outset, de Beauvoir presents us with a crucial point of view that;

“one is not born, but rather becomes, a woman”

This is an important key to reading The Second Sex and it in itself reveals a deep complexity to the female experience.

Where we refer to the ‘human’ or ‘man’ there is a general acceptance that the term refers to the whole of humanity. Yet where we speak of ‘woman’ there begins an automatic tendency towards separation in our thinking. The idea of, or experience of woman is set apart and divided from the whole human.

This subtle shift in thinking may barely register upon our conscious minds but the implications of it are profound because from the outset of any discussion regarding her experience ‘woman’ has acquired a position of separation from ‘human’ and according to de Beauvoir, she becomes ‘Other’.

“The advantage man enjoys and which manifest itself from childhood onwards is that his vocation as a human being in no way contradicts his destiny as male […] However, for a woman to accomplish her femininity she is required to be object and prey; […] Renouncing her femininity means renouncing part of her humanity”

De Beauvoir presents many ways in which the problems manifest themselves from early girlhood through schooling into adolescence, further education and on into the adult world full of its professions, relationships and family life. However, the main resulting scenario that de Beauvoir presents is that by attempting to be both herself and be feminine, the woman has had to divide her focus between the expectations or hopes of her personal destiny with those of her pre-determined role as a woman, a role which was not set or defined by her.

“The man obeys an imperious necessity: the woman must constantly renew her decision”

It becomes disturbing to consider that nearly half of the human population maybe experiencing separation at such a fundamental level. If we think of how many scientists, engineers, artists, leaders and politicians have potentially not ‘gone for’ their talent or reached for their truest potential the sense of loss for the whole becomes absurd.

“This is the fundamental characteristic of woman: she is the Other at the heart of a whole whose two components are necessary to each other.”

The defeat of this general Otherness becomes not only imperative for women’s development but equally for that of men. The masculine principle needs the feminine principle to be whole within the world in order that it too may know the true potential of its own nature.

Imagine, what tragic piano playing would it be if the left hand thought itself as merely an ornament to the efforts of the right? Or, if the right hand were to become so used to the prominence of its own tune so as to never hear the sound of its balance, it could not know the inherent harmony of its own melody.

In the ancient Chinese Yin-Yang symbol whilst Yin and Yang are distinct, both are formed by each other and with each other held within their centres.

“…it is up to man to make the reign of freedom triumph; to carry off this supreme victory, men and women must among other things and above and beyond their natural differentiations, unequivocally affirm their brotherhood.”