Beauty in stone – the Greek Miracle 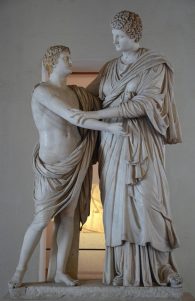 I have just learned that in the next few weeks the British Museum will be launching a major exhibition on Greek art – Beauty in the human form. Why is it that, despite the passage of twenty-five centuries, the beauty of Greek sculpture still commands so much attention?

In what is sometimes called the Greek miracle, many ‘trends’ of thought converged together – the philosophical, the aesthetic, the humanistic, the metaphysical, etc. And like the beads of a necklace, all these trends are held together by a single thread: BEAUTY.

Especially during the idealism of the Classical Period (from approximately 480 to 323 B.C.) and through the Platonic teachings, Greek sculpture underwent a fundamental change. The human body became the reflection of an ideal form, the form of Beauty itself seen as a divine archetype. A transcendental meaning was given to beautiful marble forms, so that through art man could be reminded of a divine realm and his own divine origins.

The beautiful forms sculpted in stone also served to keep man in contact with a dimension of order and ‘measure’, instilling in him a sense of peace, inner security and moral integrity. At the same time, all the contradictory elements which are part and parcel of the human condition were balanced into forms portraying dynamic but harmonious movements. The beauty of the whole depended on the harmony and integration of its parts, thus stimulating man’s inner quest to know himself.