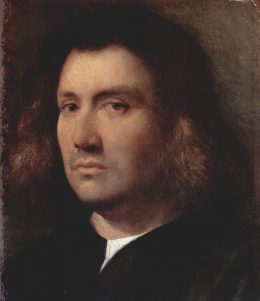 The Royal Academy of Arts has recently put together an excellent exhibition presenting some of the greatest painters of the high Renaissance (c. 1490-1530) in a single show. The main intent of the exhibition was to revisit in particular the enigmatic figure of Giorgione, considered by many to be the founder of Venetian painting of the 16th century. After breaking away from the more ‘classical’ representations epitomized in the works of his teacher Giovanni Bellini, Giorgione initiated an innovative pictorial style which became the foundation for the art of Titian, the most renowned painter of the Venetian school. As with all the great painters of the high Renaissance, we find in his works a great degree of idealization, beauty and balance and his poetic landscapes in particular are instilled with a rare sense of the mysterious and enigmatic.

Even though Giorgione had his own particular style, I believe that his artistic contributions shared the same philosophical principles as those that underlay the art of the Renaissance in general. Renaissance art was mainly founded on Classicism and Humanism. The former brought an appreciation of the arts of Antiquity (i.e. Greece and Rome) with its emphasis on mythological representations, proportion and measure, naturalism and ‘realism’. Humanism contributed a ‘rediscovery’ of the belief in the nobility of man, the dignity and worth of the individual and the promotion of virtuous and ethical actions.

Because of the emphasis on Classicism, painting and sculpture saw the introduction of symbolic compositions from ‘pagan’ mythology, where the ancient image became the ‘ideal form’ or archetype to be contemplated. The aim of the artist became the creation of an art that could bridge the gap between appearances and ideas or ‘essences’. The pure and unsullied reality of the ‘archetypal world’, once contemplated or intuited by the artist, had to be revealed (i.e. re-veiled) through a work of art. To paint what one cannot see became the artist’s goal. Thus, Raphael once remarked “…in order to paint a beautiful woman, I would have to see several beautiful women…but because there are so few…I make use of a certain idea which comes to my mind…and I work hard to achieve it”.

As hinted at above, one of the characteristics of the visual art of the Renaissance was the use of symbolic and allegorical representations. And in many of Giorgione’s works we find this characteristic emphasized (the painting entitled The Three Philosophers is a good example). Yet we should not confine his works to those aforementioned styles and characteristics. Giorgione’s art brought something new to his contemporaries and ‘looked’ forward to the future. As a master of poetic and atmospheric moods, he became an early exponent of a ‘romantic’ style, where the artist is an intensifier of emotions, revealing the chiaroscuro of joy and pain, of light and darkness.