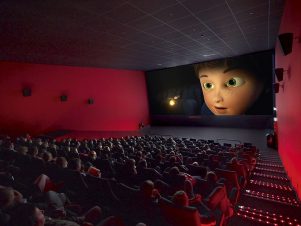 If we were to ask ourselves ‘what is cinema?’ we might say that it is an artistic expression, or perhaps a good way of telling stories, a form of entertainment or, frankly speaking, just plain business. The true answer is, probably, all of them. Whatever the case, it would be practically impossible to understand the 20th century without taking into consideration the impact of cinema on mind and society. First from a visual point of view during the silent era at the beginning of the century – a huge impact without precedent for the audiences of the day – and then audiovisual with the arrival of the “talkies” in 1929.

It was the first time when people could actually see images representing what had previously been left to their imagination. Probably they would have had to adjust what they had previously only imagined to the images on the screen, but once they had done so, they would just have relaxed and enjoyed what was on offer. This meant the real possibility, even if for a brief period of time, of disconnecting in the darkness of the movie theatre and living a parallel reality, mentally and emotionally. It was a kind of experience that had been unthinkable until that moment. Plato and his Allegory of the Cave come to mind – his story about people living in the darkness of a cave watching shadows cast on the wall in front of them by a source of light behind them and believing those shadows to be real. The 20th century brought a way of explaining this with no imagination required at all, you just needed to understand how the mechanism of cinema worked.

The Thirties brought with it, on the one hand, the phenomenon of the Depression as a result of the Stock Exchange crash of 1929 and, on the other hand, the arrival of the talkies in cinema with all its possibilities. Most of the public, living in dire circumstances, facing bankruptcies or losing their jobs and savings, needed, somehow, a way of escaping from that awful reality and cinema became a refuge from all their problems, allowing them to live an imaginary situation for an hour or two and get a real lift from was called the “happy ending”. This worked so well that the public actually flocked to watch all sort of stories, comedies, dramas or even tragedies that contained that “magic touch”, reassuring people that, whatever the circumstances, all stories could and probably would, end well. But cinema also tackled social issues, like Charlie Chaplin in Modern Times about man becoming a part of the machine, or film versions of literature like The Grapes of Wrath about a poor family migrating with all their belongings in a truck to California in search of a better future.

In spite of all this, and many more topics that we don’t have the space to talk about here, if there is something to be critical about in cinema it is the fact that by creating the spectator, it contributed to the spectator´s attitude which is ingrained in our society, which accustomed us to watching many situations and experiences in life rather than living them. The arrival of television and then the internet simply confirmed this unfortunate tendency.