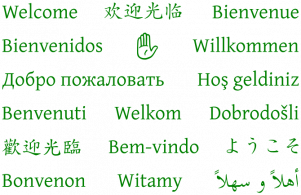 If you have ever tried to learn a new language, you might have noticed that it is not only about learning the alphabet, vocabulary and grammar. It also involves learning a new way of thinking and expressing yourself.

Language carries references to the culture to which it belongs and, by interacting with a language, we gain an insight into a particular culture.

Examples of this can be found in some Eastern languages such as Chinese, Arabic, Hindi, Urdu, Punjabi and Turkish. These languages have specific words to distinguish a relationship between relatives. In Punjabi the word used to describe the younger brother of a father is different to the word for the older brother of a father. In Turkish, Arabic, Hindi and Urdu, the word used to describe a “mother’s brother” is different to the word used to describe a “father’s brother”.  In English, on the other hand, we use only one word for these two concepts, which is “uncle”. This shows that distinguishing these specific relationships is considered to be important for these cultures.

Another example could be between English and French. Pork, veal and mutton are all French words and the word “cuisine” comes from French – a reflection of the importance of food in French culture.

The American cultural anthropologist A.L. Krober (1923) said, “culture, then, began when speech was present, and from then on, the enrichment of either means the further development of the other.”  In order to shed some light on this comment, let’s go back to the roots of speech.

According to some esoteric traditions, the ability to speak began with the existence of the mind in humanity. And we have 2 kinds of minds: a higher and a lower mind. The lower mind is different in each person as it belongs to our personality, which varies from person to person. The higher mind, on the other hand, belongs to a common ability we have as humanity. Our development in the evolutionary process depends on the development of the higher mind and the actualisation of our potential mental faculties.

According to the anthropological linguist Benjamin Lee Whorf, our capacity for language is a faculty of our higher minds, but the particular language systems we learn and use are related to our lower minds. Whorf was the leading exponent of a concept called the “linguistic relativity principle”, which refers to the idea that the language we speak affects the way we think.

In fact, Whorf was not the only person in history to have pointed this out; we find similar ideas mentioned by Plato, St. Augustine and Immanuel Kant. Language is a vehicle of the mind which can help us to have access to the eternal ideas.

From the above, we can see that if language affects the way we speak and is intimately related with culture, there will be a close relationship between the mind and culture through language. Looking at some ancient languages, we find that the more sophisticated the language is, the more developed the civilization, and perhaps the opposite is also true. George Orwell, who made a life-long study of language, held that “the decay of a civilization can be seen in the declining levels of sincerity in the words and minds of its citizens.”

One of the most used words in our times is “change”. A good application of this concept could be to start using our languages with more awareness and consciousness to bring about a positive change in our culture.