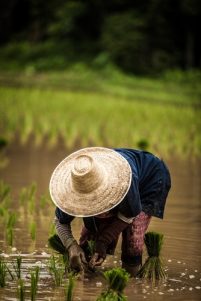 Every living being on this planet, from the mineral to plants, animals, and man, has a role to play in maintaining the fine balance of our ecosystem. If even one of these does not play its part, it will cause an imbalance that affects the whole. Today, when we look at our planet and the destruction we are causing to it, our response is usually emotional; evoking anger, frustration, despair and helplessness against some seemingly greater force that is beyond our control. The emotion will motivate a response, to do something about it, which will remain until one is taken over by some other personal matter that takes greater precedence. Eventually this leads to the acceptance that this is the way things are, and that we must learn to deal with it as part of life, rather than actually do something about it.

The environmental crisis is looked at as a collection of global and regional problems caused by an invisible mass of people. And the solution, it is often thought, should also come from there. Very rarely do we really step back and think about our own role as individuals, in the context of society, or our environment. Rarely do we remind ourselves that this ‘invisible mass’ of society is made up of individuals like you and I. Whether we accept it or not, each of us is contributing to the unsustainable use of natural resources available on our planet. Hence, any change we wish to see needs to come from within us, first.

Ecological action today is usually a reaction to personal difficulties that we might be facing. Often, this is triggered by scarcity of resources available for one’s own consumption, or for that of future generations. Short term solutions are found; however, they often only treat a symptom. We fail to understand the root of the problem itself. Humbly I suggest, as a simple first step, that we become a little more mindful of our own consumption patterns.

This little exercise is worth trying out: grab a pack of biscuits from the nearby convenience store, preferably one that you like, or used to like as child, and sit down with a few minutes of quiet time. Open your packet of biscuits and eat one or two. Enjoy the flavour, the crumbly texture, the aroma, and reminisce all the times you have enjoyed this biscuit in the past. Consider what it is about this biscuit that makes it your favourite. Now while enjoying yet another piece, turn the packet around and look at its ingredients. Usually we do this in order to check on the amount of sugar, fat, and calories…let’s try not to focus on the apparent health benefits of the biscuit for a moment…so that it does not take away from the enjoyment we were experiencing a moment ago. Rather, take a look at the list of ingredients and think about the journey of each of these items. Where was it grown? Hopefully there is some natural product in the list…so start with that. At which factory were the ingredients combined? How far did it have to travel to get to the kirana store at which you bought it?

There is a concept called ‘food miles’ which refers to the distance each food item is transported over, through its journey from producer to consumer. It is used as a unit of measure of the fuel consumed through any item’s entire lifecycle.

Let us start with the grain, usually wheat, in the form of maida or flour. If manufactured in India, the wheat usually comes from farms in the North, around Punjab and Haryana. Give a thought to the farmer and his family who were responsible for planting the seeds, the labour of the bullocks or the tractor that tilled the field, the effort invested in watering the crop, and the sun that shone on the wheat field to prepare the plant to finally yield its golden kernels of wheat. Think of the process of harvesting the grain, the threshing against stone to separate the grain from the stock, the collection of all the grain into gunny bags, which were then transported from the farm to the local mandi, being brought, sold and transported until it makes its way along with several hundred other such gunny bags from several hundred other farms…eventually to the doorstep of the factory where the biscuit is manufactured.

A moment of gratitude to the farmers…for growing the grain.

And that was just the flour. Think about the other natural ingredients in biscuits. Sugar is typically grown in parts of UP and Bihar, or Southern Maharashtra. Cocoa is cultivated at estates in Africa or South America. Nuts come either from California, Turkey or around Kashmir, Pakistan or Afghanistan. Each ingredient has gone through the process of cultivation, harvest, processing and transportation.

Return to the factory where all the ingredients are assembled, neatly lined up, ready to be combined into nice gooey dough. Think of the factory workers who helped cart the large gunny bags to empty them into industrial mixers. And also the machinery operators standing watch to make sure all the ingredients are added in the required quantities. Give a moment of thought to all the people involved in designing and making the machinery; completely hands-free machinery that is able to mix with precision, and reproduce identically shaped biscuits. Then think about the fire that baked these to crispy perfection and the packaging process that turned out neat little individual wrappers, like the one you are holding in your hand, and then into larger cartons to be shipped and transported to kirana shops across the country.

In addition, consider at each stage the fuel consumed, the electricity employed, and the infrastructure utilised…all this overwhelming usage of resources, just to ensure that you can walk down the road to find a packet of your favourite biscuit, that tastes the same every single time you open its plastic wrapper. Consider also the disposal systems required for the plastic wrappers; garbage collectors and waste segregator trucks, landfills…

To put this in context, consider that we are 7 billion people on the planet, each consuming thousands of different items during our lifetime: food, clothes, electronics, etc. We are already consuming about 25% more renewable natural resources than the planet can replenish. If the population reaches 9 billion by 2050, we will be using the biological capacity of two Earths, warns WWF. Scarcity of resources is already plaguing our planet.

805 million people worldwide do not have enough food to eat. But the problem is not the lack of food. Instead, there is a tremendous waste of resources from the point of production through to consumption. Large surpluses of grain rot in warehouses in one part of the globe while thousands are dying of hunger in another part of the globe. The needy don’t have the resources to buy and no one sees the profit in charity. The poorest 10% account for just 0.5% of resources consumed, while the wealthiest 10% account for 59%. Resource use and pollution could be cut in half if the richest 700 million (10%) chose to live at the average global standard of living. The top 20% of the population which is responsible for 80% of the consumption of natural resources are the ones living in major urban cities across the world; I don’t think we need to go too far in order to save our planet.

M.K. Gandhi had once stated, “The world has enough to support every man’s needs, but not even one man’s greed.”

Perhaps if we are more conscious of our own consumption as individuals, and as societies, we might be able to alleviate the shortage of resources and control the destruction we are causing to our planet.

Where does one begin? Start with the day-to-day, with the little things that you consume daily; the food you eat, the clothes you wear, the cleaning supplies that you use, the garbage that you generate, the modes of transport you use to commute; within each of these there lies an opportunity to reduce the footprint we leave on our environment. As we become more conscious, we become humbler and more connected to the web of life that we are so integrally woven into. Rather than being a parasite that only takes with no consideration of its host, might we become custodians of this planet?

In my opinion man’s purpose is to harmonize with nature and work with her, instead of breaking her laws. It is a role of support and responsibility, never of destruction and exploitation, and maybe in this lies one of the profound secrets to our own happiness and evolution as a species.