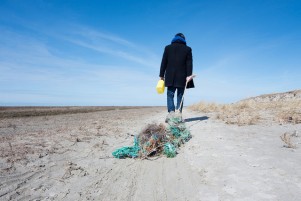 One of the world’s leading voices on the issue of climate change and protecting the environment at the 2015 Paris Climate Conference was Dr. Jane Goodall, a renowned primatologist. In one of her interviews, she explains that she came to Paris for the UN climate summit “to save the rainforests” from corruption and intensive farming. “Well, the thing is, it’s not about one person, and can they make a difference? Everybody everyday does make a difference. And if we think about the consequences of the choices we make — what we buy, what we eat and consume, what we wear—and we start making the right ethical choices, then when that’s multiplied a thousand, a million, a billion, several billion times, we see the world moving towards change. So the most important thing is to give people hope. I have seen areas that have been destroyed that have come back to be beautiful again and support life. Nature is resilient. Animal species on the brink of extinction can be given another chance.” (1)

In December 2007, Annie Leonard and her friends at Free Range Studios put together a 20-minute movie about the way we make, use, and throw away stuff, unleashing a torrent of pent-up demand for honest conversation. The movie investigates the impact of our consumer-crazed culture on people, and the planet. In the six years since The Story of Stuff (www.storyofstuff.org) was released, Annie’s ‘cartoon about trash’ has had over 40 million views worldwide. This video can be seen at https://youtu.be/9GorqroigqM. (2)

In a way, these efforts by Jane and Annie are motivated by their concern for us. We too are concerned about the problems that are affecting our societies, our cities, our countries and our planet. We sense them daily in various forms and try hard to protect ourselves and our dear ones from their dangers. We hate the economical, environmental, political and social destruction that is happening around us…but most of the time, we feel helpless…What can we do? What can I do?

Amongst various other things, one thing that can make a lasting impact is being more aware and conscious about our consumption habits.

We buy and consume a variety of products and services every day. Beyond basic needs, these include luxury items and technological innovations meant to improve efficiency. Such consumption, beyond the basic needs, is not necessarily a bad thing in itself. Throughout history we have always sought to find ways to make our lives a bit easier to live. However, there are important issues around consumerism that increasingly need to be addressed.

How are the products and resources we consume actually produced? What are the impacts of that process of production on the environment, society and on individuals? How do consumption habits change as societies change? How much of what we consume is influenced by external factors versus our real needs? How do material values influence our personal values and relationships with our surroundings? And so on…

The consumption habits of each one of us, good or bad, aggregates and become the consumption habit of the community that we belong to. Either some influential person sets the standard that the community follows or we follow what most other people in our community do. At one end, a village named Piplantri in Rajasthan plants 111 trees on birth of a girl child. On another end, most other villages in Rajasthan spend insanely and lavishly on marriages. In both cases, one individual set the habit of the community and that became the defacto social norm. An ordinary man has too many motivators to follow the herd and too many fears to go against it.

It is important to remember that not too far in the past, before globalization and the advent of modern technology; most people consumed local products and services. For thousands of years, physical limitations coupled with spiritual awareness influenced the consumption habits of men driven by the need to survive and thrive.

For instance, ancient Athens was built around the Acropolis, a higher city located at a height in the center of the city. It was the place for inspiration and wisdom, the place where the temples and academic institutions were located. This inspiration is said to have motivated the transformation of each citizen into fulfilling a spiritual destiny.

Today we find that modern cities are planned around vast Shopping Malls! And most of us are heavily influenced by what we see, what we hear, and what we are made to feel. Marketing and the media influences our choices and drives our decisions, fueling the fundamentally flawed concept of consumerism. Victor Lebow an economist wrote a very pertinent account of modern consumerism in his paper, Price Competition in 1955, published in the 1955 Spring Issue of the Journal of Retailing.

“Our enormously productive economy demands that we make consumption our way of life, that we convert the buying and use of goods into rituals, that we seek our spiritual satisfactions, our ego satisfactions, in consumption. The measure of social status, of social acceptance, of prestige, is now to be found in our consumptive patterns. The very meaning and significance of our lives today expressed in consumptive terms. The greater the pressures upon the individual to conform to safe and accepted social standards, the more does he tend to express his aspirations and his individuality in terms of what he wears, drives, eats, his home, his car, his pattern of food serving, his hobbies.

These commodities and services must be offered to the consumer with a special urgency. We require not only “forced draft” consumption, but “expensive” consumption as well. We need things consumed, burned up, worn out, replaced and discarded at an ever increasing pace. We need to have people eat, drink, dress, ride, live, with ever more complicated and, therefore, constantly more expensive consumption.” (3)

Karma can be seen here and now. Amongst other repercussions, the effect of excessive consumerism has resulted in the following…and this is just the tip of the iceberg:

Although everyone has the same basic needs, those who can afford more end up consuming more. This begins a vicious cycle that has a multiplied negative effect on the collective well being of society. For example, water was freely available to all just a few decades ago; water conservation and preservation was a community agenda. Perhaps, the advent of bottled mineral water that only few can afford, has contributed to the fact that many are now left without drinking water sources, and are unable to afford bottled mineral water.

The Human Development Report 1998 of United Nations Development Programme (UNDP) quoted, “Today’s consumption is undermining the environmental resource base. It is exacerbating inequalities. And the dynamics of the consumption-poverty-inequality-environment nexus are accelerating. If the trends continue without change — not redistributing from high-income to low-income consumers, not shifting from polluting to cleaner goods and production technologies, not promoting goods that empower poor producers, not shifting priority from consumption for conspicuous display to meeting basic needs — today’s problems of consumption and human development will worsen.

– The real issue is not just consumption but also its patterns and effects.

– Inequalities in consumption are stark. Globally, the 20% of the world’s people in the highest-income countries account for 86% of total private consumption expenditures — the poorest 20% a minuscule 1.3%.

– Runaway growth in consumption in the past 50 years is putting strains on the environment never before seen.” (4) 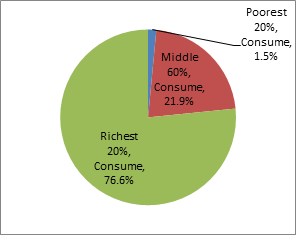 2. Pollution through mass scale production, transportation and disposal of goods.

Most of us are conditioned to believe that to reduce, reuse, and recycle is for those who cannot afford! Currently, we are cutting down trees faster than they can re-grow, we are catching fish faster than the oceans can restock, we are pumping more water out of rivers and aquifers than rainfall can replenish, and we are emitting more climate-warming carbon dioxide than oceans and forests can absorb.

It is pertinent to note that according to research from WWF and the Zoological Society of London (ZSL), the earth has lost half of its wildlife in the past 40 years! Creatures across land, rivers and the seas are being decimated as humans kill them for food in unsustainable numbers, while also polluting or destroying their habitats.

“If half the animals died in London zoo next week it would be front page news,” says Professor Ken Norris, ZSL’s director of science. “But that is happening in the great outdoors. This damage is not inevitable but a consequence of the way we choose to live…nature, which provides food and clean water and air, was essential for human well-being.”

“We have lost one half of the animal population and knowing this is driven by human consumption, this is clearly a call to arms and we must act now,” says Mike Barratt, director of science and policy at WWF. He urges that more of the Earth must be protected from development and deforestation, while food and energy be produced sustainably.

“We have all heard of the FTSE 100 index, but we have missed the ultimate indicator, the falling trend of species and ecosystems in the world,” says Professor Jonathan Baillie, ZSL’s Director of Conservation. “If we get [our response] right, we will have a safe and sustainable way of life for the future.” (5) 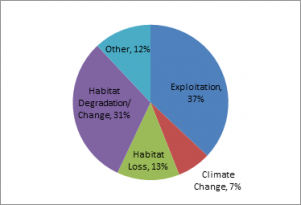 3. Dilution of human values as we are caught in the vicious circle of fulfillment of unending wants.

We end up neglecting what really matters and chase after what money can buy. We seek to satisfy ourselves with the feel-good factor that we think buying and consuming generates, blind to the fact that it is but an elusive gratification. Consumerism brings with it ego and makes us lazy, complacent and arrogant. This ego likely causes us to neglect our internal challenges and development potential that can be achieved through disciplined effort of mind and body.

In his book Man’s Search for Meaning, Viktor Frankl wrote the following about what a person goes through when possessed by a feeling that he refers to as an existential vacuum: “No instinct tells him what he has to do and no tradition tells him what he ought to do; sometimes he does not even know what he wishes to do. There are various guises under which the existential vacuum appears. Sometimes the frustrated will to meaning is vicariously compensated for by a will to power…the will to money…the will to pleasure.” (6)

Unless we address the underlying reasons we buy so much, we will never truly feel that we have enough. Unless we understand why stuff keeps coming through the door, it matters less and less how we organize it, curate it, or dispose of it when we’re done. We’re not buying things because we have money to burn. We aren’t doing it because we’ve got space to fill. We’re probably doing it because it gives us the false feeling of happiness. But, studies repeatedly hammer home one simple truth: It’s the experiences and the people in our lives that bring the most happiness. Not the stuff. Never the stuff.

Excessive consumption is perhaps one of the biggest causes of the economical, environmental, political and social destruction. The first step is to be conscious and aware of this. The next step is to work towards inner change, in order to set our priorities right; to recognize that inner fulfillment can never be attained through material consumption. By reducing consumption, we might recognize other invisible factors of life. If each one of us was to manage with a little less, we might directly and indirectly impact a lot. And this can be achieved at our individual level without depending on external factors.