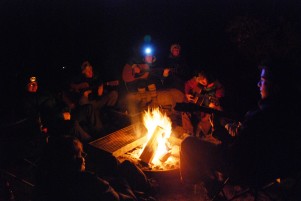 In the first of the twelve doorways that await us in this year 1983, it is good – or perhaps simply inevitable – to sharpen the sight and hearing of the Soul in order to detect what the future holds in store for us, based on the interaction between our own characteristics and the environment, under the curved shadow of the dented scythe of time.

We will not consult the stars because we are ignorant of such matters, nor will we consult men because they deceive us.

We are together, but we are alone.

I once said that no man is alone if he is with God, and that remains metaphysically true, but our hands are slipping away in the darkness, and in the smallness that conditions everything human we find little else but darkness, dampness and cold. Yes… this damp cold of the beginning of the Age of Aquarius in which all things tend to dissolve, and as they collapse and lose their age-old forms, we console our dulled reason by telling each other that these changes are the dynamics of the currents of life. And that everything will be for the best. So accustomed is our tongue to this catchphrase that no sooner has our mouth opened than it pronounces it; although now it does so between gritted teeth.

I have visited for the hundredth time the largest art gallery in the world and, from the gilded windows of their frames, the figures painted in other centuries appear to us cheerful and trusting, natural and full of reality. On the blades of the swords, the God of war places red colours, and in the holding of hands there is a golden light of love. The fruits in the “still lifes” do not look frozen except for the fact that they look so full of juices and flavours. The naked bodies do not need pornography to be attractive. In the Heavens and the Hells the artists have painted stairways that make them seem more human. One can see kings and peasants, saints and drunkards, but none of them is apologising for being what they are and each lives his glory or his misery in a natural way. Everyone seems to know that the world is a great theatre in which the virtue of each character lies in representing correctly and right up to the end the role which he or she has mysteriously chosen in long-forgotten times.

There is pain, but no sterile protest, just a clean fight, practically bare-bodied and bare-souled.

In the course of my constant travels I have seen cities that were buried by ashes and other ashes that formed the foundations of cities. “Developing” nations which I find poorer and weaker every year; powerful nations that tremble before a gang of adolescents armed with bottles containing petrol and weapons from the Korean War; “capitalist” countries in which almost no one has any capital, and other “communist” countries where no citizen has anything in common with another. I have seen those who claim to be persecuted persecuting others; those who remember having been massacred carrying out a new genocide at the slightest historical opportunity; I have talked to Heads of State and to indigenous people covered in rags. What differentiates them is less important than what unites them, but they rarely notice it.

Let us not deceive ourselves; we have already found that it is pointless to do so.

The men of my generation were the ones who set foot on the moon… But that’s where it ended; the space programs are being cut back little by little and in the heavens and on the earth the useless scrap metal that was intended to conquer the cosmos and take us on holidays to Mars is rusting away. Only the spy satellites have been developed, the devices with potential military applications. While the wonders of Venice are sinking into the sea and in the Museum of Cairo the most ancient diorite statues are spattered with paint when the walls are repainted because there is not even a sheet of protective plastic available; while in so many other museums and libraries there is no budget even for the most basic conservation of the masterpieces of Mankind… at the same time billions of dollars are left in passive reserves for the research of new and more sophisticated ways of killing. As if science – or rather, conventional scientists – had not already shown their true face when, shortly after achieving atomic fission, their discovery was used in the two bombs that razed Hiroshima and Nagasaki to the ground.

For medical, rural and industrial research, for educating and feeding people, there are never enough resources. But the money needed to build a thousand schools is spent on developing new braking devices on the wings of warplanes; what would be sufficient to make half of the arid land of the planet fertile is spent on political brainwashing campaigns; and there is not enough fuel for tractors that pull ploughs or for the owner of a tiny family car… but always enough for the armour-plated cars of the oligarchy or for the submarines bristling with atomic warheads that glide unseen beneath the surface of the seas.

The supermarkets that sell what passes for food are open 24 hours a day, including Sundays. But there are many hospitals that only operate on half-time and the churches of all religions close their doors at sunset.

If anyone speaks of honour they are scornfully branded “nostalgic”; the old lady who keeps a small bottle of teargas in her handbag to protect her life is sent to prison, but amnesties are granted to major criminals who machine-gun people in the back. “Lodges” and “mafias” traffic cocaine across all borders, but someone who takes a typewriter from one country to another has to be careful that it is not confiscated.

The powerful countries place their outdated tools of war in the “developing countries” as “defensive weapons”, or their prototypes, to find out whether they work well, without caring how many people die as a result; but they draft intricate laws and documentation on “Human Rights”. And they set themselves up as judges and policemen for the rest of mankind, without having the moral right even to exist, let alone to judge and repress.

“Marxism” and “capitalism”, “authoritarianism” and “liberalism” have failed. Today there are more illiterate and hungry people than there have ever been at any time in known history. The earth and the water have been poisoned; the air of cities is barely breathable.

We are left with fire.

Let us draw close to the fire.

Fire was associated by the oldest cultures with the God who helped human beings, whether it was Huehueteotl in Mexico, Agni in India or Prometheus in Greece.

Fire speaks to us of an Earth and of a Vertical Paradise, of an untiring Fever to go upwards, of a Call to the Heights, to Purity and Power, which forged everything that is good in Humanity – in you and me.

Physical fire is only the reflection in the mirror of manifestation of that other Spiritual Fire which today must bring us together around the Mystical Bonfire. We are in the middle of the night, it is cold and everything is wet. What better than fire to warm us, to revive, to illuminate our eyes, to dry our tears, to make our hands golden as we hold them up to the fire?

Let us renew the oldest Pact of Humanity. Let us renew the Pact with Fire.
Let us promise ourselves in this year that is now beginning to be more fiery, more active, to study more, to work harder, to be cleaner, more detoxified, freer from shadows of selfishness and evil. Let us put light in our intelligence and warmth in our hearts.

To all those who are not yet blind: GATHER AROUND THE FIRE!