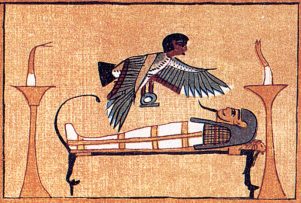 From time immemorial, human beings have asked themselves the question ‘who am I?’ And philosophers, theologians and metaphysicians have all come up with different answers. The classification of the various human ‘constituents’, from one system of thought to another might have changed, but the underlying principles in question have remained the same. Thus, even though we hear of a twofold, threefold, sevenfold or tenfold division of the human being, the concepts describing this multi-functional being reflect certain universal teachings.

In the Western tradition, which we are going to consider in this article, a human being has the capacity to function at different levels of consciousness and, in his everyday experiences, his centre of consciousness is not always fixed in one place (i.e. the physical body), but fluctuates from one level to another. Thus, at one level, we function as a biological and vital organism, in which energy and ‘life’ circulates. At another level, we display behavioural life-functions such as the ability to feel, think and decide our course of action. And at a higher level still, we may also bring our awareness and consciousness to a supra-mental level and experience ‘something’ beyond the ordinary.

Associated with these basic functions are various ‘vehicles’ or ‘bodies’, which constitute the human being. These ‘bodies’ allow for a multitude of activities and experiences (both subjective and objective) to take place. For instance, the activity of thinking is experienced through a ‘mind body’ (often called rational soul), selfish emotions through a ‘desire body’ (or animal soul), the sense of physical well-being through an ‘energetic vehicle’ (or vital soul) and so on. In the various esoteric traditions, these vehicles have taken different names.

Let us now look at some of the most well known classifications. The meaning of the terms I am going to briefly describe should not be taken as definitive. The concepts they express are much more nuanced and escape intellectual analysis. Furthermore, we should not forget that most of the esoteric teachings which have come down to us in the last few centuries have been conditioned by the mindset of the age. And in the West, these have been centuries of scientific reductionism, rational analysis and atomistic thinking!

Egypt has been considered the source of all the Hermetic traditions of the West and we should not be surprised to find a very complex system of thought relating to man’s inner constitution. The Egyptians always distinguished between a spiritual, divine or animating principle, and a mere organic or ‘material’ entity but their concept of a human being was very holistic and dynamic. In their system they included a number of souls and auxiliary entities that together constituted the individual.

The Khat was the mortal body seen simply as the emanation of a higher principle known as Ka. The Ka was known as the ‘double’ or animating principle, which, supplies ‘life-force’ to the physical vehicle and, like a magnetic field, keeps it together.  Ba referred to all those qualities that make up a person in a non-physical sense and make an individual unique. It could be equated with the concept of personal soul or personal self. In the funerary text, the Akh was man’s immortal part, the intellect, will and intentions of the deceased; that which transcended death and ascended to the heavens to live with the gods or the imperishable stars. Two more important concepts were the Ab or spiritual heart, the source of good and evil within a person and Ren, the name. The name was considered the foundation of a being as an individual. Only when it has a name, when it can be addressed and related to, can a being begin its proper existence. Therefore, an important part of ensuring the continued existence after death was the perpetuation of one’s name.

In the Hebrew esoteric tradition, which still survives in the writings of the Old Testament and the Kabbalistic teachings, we find the Nephesh, a sort of animal or living soul, which animates a body and gives it vitality. Neshamah, or the higher soul, related to the ‘best’ part of our mind. It is the intellect or intelligent part of man, the potential source of moral and virtuous action. Ruach, a kind of middle principle (which connects Nephesh and Neshamah) related to our everyday state of consciousness, our emotional states and mundane thought-activities. Chayah, a concept related to the experience of one’s true centre, described as ‘an inner impulse, which seeks self-actualisation and spiritual realisation’. And we also find Yecidah, comparable to the unitive state spoken of by mystics, where man’s divine essence and God have merged into one whole. There is also Zelem, a kind of etheric envelope or aura that serves as a link between the higher principles and the physical body.

Another important tradition to consider, which synthesized the Platonic and Pythagorean teachings, is the Neo-Platonic tradition. Apart from the physical body, known as soma, we find a threefold division of the human soul:

First, the Unreasoning Soul, considered as the principle of animal life, always joined to the body. This was seen as responsible for the sensible and emotional appetites, man’s passionate nature, his sense-memory and generative faculties. In Greek this principle is probably linked to the term Thymo, as found in Plato’s Phaedrus. Then we have the Reasoning Soul, which accounted for discursive reasoning and was separable from the body. This principle was believed to possess the faculties of intellectual imagination and intellectual memory. It was a kind of middle principle (lying between the Intelligent and the Unreasoning Soul) which included the ancient concept of Phren (loosely translated as mind), as found in Pythagorean teachings. And finally, we have the Intelligent Soul, which was believed to be untouched by matter and responsible for intuition. This concept was linked to the Greek term Nous.

In the Platonic tradition we also find an even higher principle, the Agathon, connected to the greater Good (i.e. the Divine reality). And within the same ancient Greek tradition, another obscure term is also mentioned, the Eidolon (Simulacrum in Latin), which like the Egyptian Ka indicates the presence of a kind of ‘double’ or ‘energetic’ mould which gives form to the soma or physical body.

As we can see, I have just scratched the surface of a vast body of knowledge which modern man has inherited. Perhaps, next time we happen to ask ourselves the question ‘who am I?’, we will be inspired by this knowledge and will start digging deeper and deeper in search of an answer.