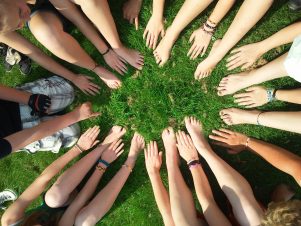 One of the foundations of how we conceptualize our sense of self today, perhaps came from the 17th century philosopher Rene Descartes’ most famous maxim, cogito ergo sum or I think therefore I am. Taken to an extreme that Descartes himself may never have meant, we are conditioned to prioritize self-interest, applaud the pursuit of our own happiness, and promote personal freedoms dictated by one’s own morality. Today we think of society as made up of a collection of autonomous, human beings, separate from the environment and, in many ways, independent of society, where only the fittest survive, leading to competition and conflict in an attempt to achieve success by protecting me and mine.

However, a swift and sweeping glance at the crime, gender inequality, poverty, racism and the violence all over our world asks me to consider if there might be a different paradigm we can use to build a better and brighter future for our children; a just society, whose warp and weft are empathy, compassion and generosity, where we cloak others with the same dignity with which we cloak ourselves, where wealth is not equated to worth, and where unity, and the things that bind us together as one humanity, are the basis on which we premise our relationships and our lives.

These are some characteristics of what we might refer to as Ubuntu, which encompasses a complex aggregate of values, attitudes and a code of conduct, which I have tried to identify and unravel in my investigation.

A community’s lexicon arises from the need to express common values and shared ideas and beliefs. It is therefore interesting to note that Ubuntu has no direct translation in English, perhaps because this intricate and composite notion is not articulated as a culturally valued pursuit in modern society. Ubuntu comes from a Zulu word, whose equivalent exists in almost every African language, and can be loosely translated as “A person is a person through other persons” or “I am because we are”. (1) Both phrases are a condensation of the idea that there is a universal thread of connectedness that stitches together all of humanity, and that community, indeed fraternity, not individuality, is what makes us human.

This gem of ancient African wisdom asserts that who we are, is defined by a sense of belonging to something larger than our own separate selves, and it is only when the whole flourishes, that each constituent part can reach its full potential. Ubuntu then, would reject the idea of a self-made man, positing that our every interaction and every experience has intrinsically contributed towards our growth, to who we are today. Our parents and care takers nourished our bodies and spirits when we were helpless. Our teachers taught us how to read and write. We learned how to work from mentors and colleagues, and how to build emotional connections through lovers and friends. All the technology and tools we use to increase our efficiency have come from the labor and creativity of other human beings. We must therefore acknowledge this enormous legacy with humility and gratitude, as well as the infinite worth of every individual whose life intersected with our own.

If Ubuntu sounds like a naïve and simplistic tribal construct, irrelevant to modern society, one has only to look to Archbishop Desmond Tutu, who headed the Truth & Reconciliation Commission assembled at the end of apartheid in South Africa, to help the country heal. He presided over the testimonies of perpetrators of crimes on both sides of the abyss that divided the country. These were broadcast on television so that the whole country would bear witness to the extent of the atrocities carried out, both in trying to bolster apartheid, and in trying to vanquish it. Hearing the complete stories of the chain of events that led to antithetical belief systems, however misguided, accomplished a ground-breaking phenomenon; as the entire world watched astounded, South Africa brought empathy, compassion and forgiveness to the process of justice, resulting in not just a punitive, retributive justice, but a restorative and redemptive process of healing, an important step towards unity.

By putting yourself wholly into another person’s shoes, by letting go of your point of view, and by stepping back and changing your angle of vision to see things from another’s perspective, perhaps you might come to the painful conclusion that given those self-same circumstances, you too might have reacted in a similar manner.

Desmond Tutu explained the essence of Ubuntu as “My humanity is caught up, is inextricably bound up in yours.” (1) And this was perfectly exemplified by Nelson Mandela when he extended an invitation to his inauguration, even to his jailor, Christo Brand. How can we practically find within ourselves this extraordinary level of generosity of spirit that recognizes even an established enemy, first and foremost as a fellow human being? Perhaps we can begin by recognizing that the hurt and injustice caused to us may not necessarily have been a personal attack. People adhere to long held beliefs and experiences implanted in childhood, ingrained and affirmed by established ways of life. By striving to understand the reasons for their choices, we might end up seeing our adversaries in a completely different light.

However, this requires a seismic shift within us.

Ubuntu seeks out the good in each one, trusting that it exists. It is a formidable task to continually look for the good around us, despite the socio-economic challenges of our times. And even more arduous, is to unceasingly strive to bring out the capacity of goodness that lies within ourselves. But, in my own experience, inherent to human beings is a moral compass, an internal ethical framework that when activated, can unerringly guide us to the Truth. We are all a mixture of strength and weakness, of the admirable and the inadequate, of areas of darkness and areas of light. But the glory of the human condition lies in recognizing this, while unfailingly striving to choose the light.

Bryan Stevenson, the civil rights lawyer and social activist who founded the Equal Justice Initiative, in his heart wrenching book Just Mercy said, “We are not the worst thing we have done in our lives. Each of us is more. I’ve always believed that if someone tells a lie, they are not just a liar, if someone takes something, they are not just thief, and even if you kill someone, I don’t believe you’re just a killer.” (2) Ubuntu asks that we recognize the other things we are too. And that it is possible to confront our own darkness and emerge into the light.

In fact, Ubuntu is a wholly consistent and compelling construct. It is also seen in the underlying universal principles that govern nature. The interconnected web of life, of which we are a small but integral part, is a living matrix of the ethic of Ubuntu; everything I do has an effect on you, and on the whole, and so even the least hurt done to you is also a wound to me.

Once we perceive that we truly create each other, surely it is undeniable that we are obligated to sustain each other. Our humanness is a quality we owe to each other, to mankind, and all of nature. Seen through this lens, we might recognize that the unfettered materialism that is depleting our planet, our home, is a violation of this universal truth and diminishes our humanity.

Ubuntu asserts that individually we are all beautiful tiles. But only by playing a fitting, supportive and rightful role, can we become a cohesive, unified, and glorious mosaic. And so, each individual is invited to always consider the larger picture, acknowledging that everyone has a valuable function. Furthermore, it is pivotal that as we fulfill our duty, our actions inspire others to do the same, so that together we might build a new and better world for succeeding generations.

South African anti-apartheid activist Steve Biko echoed this when he said, “We believe that in the long run, the special contribution to the world by Africa will be in the field of human relationships. The great powers of the world may have done wonders by giving the world an industrial and military look, but the greatest gift still has to come from Africa – giving the world a human face.” (3)

This is Ubuntu; elevating harmony and the spirit of solidarity into a moral duty, will inevitably lead to a world that is richer, more connected and more humane.