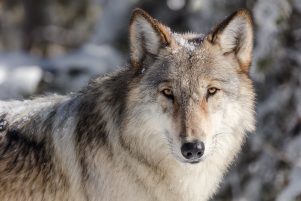 The image we have of the wolf today is a product of our culture and it is not entirely positive. The wolf has been demonised in the past and hated for various reasons. Medieval stories describe the wolf as a devil and the sixteenth-century tale Little Red Riding Hood showed the wolf as a devourer, while seventeenth-century tales in France described werewolves as the greatest danger coming out of the woods. The wolf is a beast, cruel and aggressive, killing livestock, innocent lambs and people.

Killing wolves was encouraged all around Europe, and in North America as well with the arrival of settlers. It was seen as a righteous duty, a kind of justified crusade. Human beings were entitled to bring moral order and revenge, showing who is the master of nature.

Wolves in England had already become very rare by the fifteenth century, although they were still found in Yorkshire and remained present in Scotland until the seventeenth century. In most parts of Western Europe the wolf was exterminated in the nineteenth century. Today wolves are slowly coming back around Europe and their numbers are growing, but we still don’t understand them very well. There are many reasons for this, the main one being that observing wolves in the wild is very difficult, as they are very intelligent and equipped with powerful senses, while in captivity wolves develop a certain degree of neurosis and their behaviour changes as a result.

But if we try, we can find plenty of research in the field and uncover the wolf’s true nature. David Mech, a specialist and authority on wolves wrote: “Probably the creature’s strongest personality trait is its capacity for making emotional attachments to other individuals”. Their social bonding and caring behaviour are second to humans and other social primates. There are observations of an older pack member with a broken jaw who was fed by other members with regurgitated food until he was healed, and the same goes for wolves suffering from arthritis or old age. There are affectionate ties between them. They even mourn when losing a pack member, as was observed by naturalist Jamie Dutcher. He noted that the pack stopped playing for six weeks after the sudden death of one of their members, despite a significant portion of wolves’ time being dedicated to play. Wolves love to play, so much so that they don’t even need another wolf to play with as the natural world is a playmate. There are cases of seeing a play between wolf and raven, where they would be chasing each other without causing any harm, or sometimes even falling snowflakes can bring them delight.

Naturalist Adolf Murie studying wolves wrote about their personality: “A second characteristic of wolf personality is the animal’s basic aversion to fighting.” He related it to an anecdote of a wolf being upset by two dogs fighting each other. The wolf came and started pulling the aggressor dog off the other dog by the tail. Mech is convinced after looking at records that: “no wolf, except a wolf with rabies, has been ever known to make a deliberate attack on a human being in North America”.

Barry Lopez, in his book Of Wolf and Man, suggests that there is also a certain conversation going on between a wolf and its prey. Sometimes there is a clear moment of staring between predator and prey, which is an exchange of information. Lopez calls this the conversation of death, he sees it as a ceremonial act, an exchange of the flesh of the hunted for respect for its spirit. Therefore, there is a sacred order in it. There are many examples of a wolf killing twenty or more sheep in a very compulsive manner. It could be that this is not so much a case of irrational killing as a failure in establishing the conversation of death. The wolf has initiated a sacred rite, but the animals were not able to follow. There are some surprising similarities with the hunting process of native American Indians. There is respect, a dialogue and a recognition of a role.

Let’s try to think of nature as an orchestra where every instrument plays its part. The problem when we are disconnected from nature is that we can rarely hear the symphony, but only the sounds, which when isolated can’t produce the greatness of the whole. This is a world deprived of beauty which we have created for ourselves. The real beasts are not to be found out there, but rather in our immoral attitude towards animals and nature: we have projected onto the wolf the shadow of our own animal self.