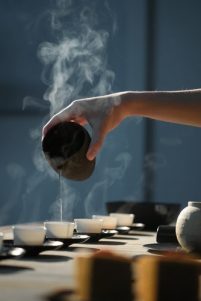 Grace has become an old fashioned word, graciousness and courtesy have become old world values, almost valueless in today’s environment. The world has gone über brash. Billboards extoll the ‘virtue’ of Attitude, with a capital A: “Wear your Attitude,” screams one, as though attitude were an aspirational achievement! A young generation has grown up with an exaggerated sense of privilege and entitlement. If you say ‘please’ or ‘thank you’, people look at you as though you were an anachronism. We are encouraged to be ‘go-getters’, to demand, to seize what we consider is ours. Business school entrance tests include Group Discussions, where your acceptability to enter the exalted portals of the school is judged by whether you can interrupt and out-yell the other participants! Sadly this trait is used decades later by the same B school boors…er sorry…graduates, in board meetings. Type A personalities – aggressive, loud, dominant Alpha Males (and increasingly females) are venerated in corporate headquarters. And at the other end of the spectrum, aspirational youngsters have broken through middle class shackles to achieve professional and financial success, and developed an exaggerated sense of ‘Attitude’ and brashness: “We are like this only. Take it or leave it!” seems to be their anthem.

What is grace? In its simplest, everyday form, it is the art of offering and accepting, with genuine humility and gratitude. It is as much in the quick and genuine rendering of an apology, as in its acceptance. Grace lies in simple good manners. It lies in jumping up to give your seat to an older person; it lies in assisting mothers struggling to manage shopping bags and toddlers; it lies in letting an old man shuffle slowly across the zebra crossing even if the traffic light has turned green. There is even grace in accepting a compliment. Usually the conversation goes something like this:

Padma: “Rekha you look lovely in that sari!”
Rekha: “Oh this old sari! I must look so dowdy!”

If Rekha had smiled and said, “Thank you for the compliment, Padma…,” it would have been a graceful, un-self-deprecating acknowledgement of Padma’s compliment.

On a recent visit to Japan I was amazed by their general sense of grace and politeness. Walking into a fast food outlet to ask for directions, I was astounded when a young man hurriedly packed up his half-eaten burger and cola into a plastic bag to walk me to the front door of my hotel! Each time I asked for directions, someone would walk me right up to my destination! In Japan almost everything is done ceremoniously with utmost consciousness and grace. The elaborate tea drinking ceremony is an outstanding example of this. It channels of all of one’s attention into predefined movements, which highlights the aesthetics of the whole process beyond the act of making and drinking tea. The host will consider the placement of the tea utensils from the point of view of the guest and the guest in turn will appreciate even the tea cup, before taking a sip of the tea. To watch such a ceremony is to watch grace in action.

Politeness, courtesy and gratitude are the hallmark of everyday grace that we might each endeavor to live by as an expression of our inner nobility, our inner Acropolis. It includes how we treat each other and how we treat things; not just human beings. It is to keep our environment clean, it is to care as much for public property as we do for our own things, it is to show respect to everything, inasmuch as it is an act of genuine politeness. It is an act of authentic generosity, an expression of inner discipline and an awareness of our essential unity. The world would be a much better place to live in if each of us could embody these principles into our quotidian interactions.

There is an apocryphal story of a Queen of England who was once hosting a banquet. One of the diners, not realising what a finger bowl was, thought it was soup. He raised the bowl to his lips to drink from it, instead of using it to wash his fingers. The queen, ever graceful, not wishing to embarrass her guest, followed suit and sipped delicately from her own bowl! Whether true or not, the essential message of the story is one of grace.

We can all bring grace into our everyday interactions. It only takes awareness. Remember you attract more bees with honey rather than vinegar! Instead of aggressiveness and brashness, let us make courtesy and grace fashionable. So how might we bring more grace into our lives? To use a clichéd phrase: to be in the Now. Too often we are lost in the past or are in the future; both exercises in futility. The past cannot be changed. The future is unknown and not in our control. Live fully in the present; that’s all we can control. And if we are fully present where we are, if we live our moments with consciousness and awareness, we will see opportunities to bring grace into our lives. So often we don’t even notice the old man trying to cross the road in front of our car. We can perform everyday actions with grace and bring beauty to the mundane. A person who carries herself gracefully looks beautiful, irrespective of her features or shape. A person who, on seeing you have only two items, asks you to go ahead of her in the checkout line of a supermarket, exhibits grace.

The Kath Upanishad and Mundak Upanishad (3/2/3) say: “God cannot be understood through study, debating, intellectual application or mere listening. When a soul surrenders to God wholeheartedly, he receives God’s grace, and with God’s grace, he attains God.”

In the Bhagavad Gita (11/53-54), Krishna revealing His divine form to Arjuna explained, “Arjuna, the divine vision of My form that you just experienced is not the result of studying the Vedas or performing the austerities from the paths of jnana and yoga, it is not the result of performing good actions, Vedic rituals or following religious rules and regulations. This is only the result of My grace, which you receive when you have exclusive devotion for Me.”

The Shvetashvatar Upanishad states, “God can be known only through His grace.”

In the Ramayana, Goswami Tulsidas states, “It may be possible to produce butter by churning water or to extract oil from sand, but it would still be impossible to cross the ocean of maya without God’s grace.”

Surrender
What is the path to this Divine Grace? It is often confused with devotion, as in Bhakti, defined as blind surrender to the Divine. It is not to do nothing and expect to be showered with Divine Grace. All ancient schools of wisdom exhort us to do our duty, to follow Dharma, to live our lives with sacredness and meaning to realize our full potential. Certainly we cannot do this by mere surrender to God and abject disregard of our Dharma!

We achieve this by doing what needs to be done, by doing what is right and just and honest. We bring upon ourselves the grace of the Universe, by doing what we should, and then surrendering the consequences of our right actions to the Universe. In the Gita this is referred to as karmaphalatyaga – to give up the desire for the fruits of our actions. This is when doing ends and surrender begins. This is the start of faith and trust in the Justice of Life, the Divine.

And in the Christian tradition there is that wonderful hymn, Amazing Grace in which one verse says, “Through many dangers, toils and snares, I have already come. ‘Tis Grace has brought me safe thus far. And Grace will lead me home.”

Divine Grace is ever present. Through right and desire-less action, we open ourselves to receive it, to then express through grace our own true nature.