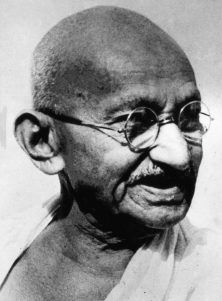 Over the ages, many Individuals, even while seeking to overcome their own personal challenges have endeavoured and succeeded in contributing to Humanity. The greatness of these persons was defined by the spirit of purpose they exhibited during their lifetime. These were common men, who chose to walk in the footsteps trod earlier by giants. This is a path that leads towards an evolutionary transformation of the self. Each of us must look to these stalwarts, who have lived amongst our midst, to learn from their teachings and to emulate their ideals.

We know that through the untiring and unwavering efforts of Mahatma Gandhi , India found independence from colonial rule. He was the inspirational force that stirred an entire generation, to campaign for this just cause. He was committed to struggle for this higher pursuit, beyond the thoughts and actions meant to safeguard daily livelihood. He fought against all odds to lead a nation out of darkness and onto a path of new light. He is an international symbol for human rights whose personal dedication to nonviolent resistance continues to inspire many other leaders and generations of people across nations.

It is but natural for the populace to feel sad and be full of grief, at the passing of such a great man, as a loss for the world. Yet, we must recognise that his Spirit is inextinguishable. For us it continues to exist in the form of his teachings and thoughts. We only need to connect with them wholeheartedly, to find the same Spirit within ourselves. If we do so with a firm will, we shall discover that the abilities and capacities that can uplift each one of us, dwells within ourselves. When we remake ourselves, not only would our material life and spiritual growth be positive, but also naturally the world will be a much better place and the entirety of human evolution will find the right momentum to progress. This is well encapsulated in this quote attributed to Gandhi: “The difference between what we do and what we are capable of doing would suffice to solve most of the world’s problems.”

We shall soon be upon the 150th birth-year anniversary of Mohandas Karamchand Gandhi. He was and shall continue to be a doyen among great leaders, whose endeavours positively influenced the thought that helped shaped our present world. His legacy is of integral importance and pivotal for our generation to understand. On this important occasion, while the whole world unites in remembering the man, we must reflect on how we can show our respects. True homage is presented when we live our lives as per the values he espoused.

To do so, first we must understand clearly his Ideals. Those most prominent were Ahimsa (Non-violence), Satya (Truth), Brahmacharya (Self-Discipline), Sarvodaya (Universal Progress), dignity for all humans, simplicity of living and community well-being. When we seek to discover the essence of his teachings, we may look at adapting those ideas we best connect with and practice their principles, so as to realise the virtues they inherently espouse. Also, when we reflect it is apparent how the Ideals may be adapted to our present times and personal circumstances.

When I began to read, a few points about Gandhi became apparent quite soon in my enquiry:

1. He can be perceived as one with a complex personality. It was his commitment to the fundamental aspects and the core principles that allowed him to act in the ubiquitous manner that some people have had difficulty relating to, as they are viewed through the common-lens of societal and materialistic norms.

2. He too faced many travails in his personal life, household and family issues. He sought to rise above them and sought the means to continue to dedicate and be able to serve the higher cause he had taken on the mantle of. In such service to Humanity, he remained constantly in motion, even at his advanced age, active till his last breath.

3. In no small measure, it is important to rightly acknowledge that Kasturba Gandhi, his wife, was a strong pillar of support. She was a part of him like none other like his constant shadow, his integral companion, his caretaker and, later in life, his representative too. This did not come easily though, and the two found an equilibrium of sort as their life unwrapped. It is not to say that she was meek, in fact, she hardly acceded to her husband’s wishes easily, and Gandhi’s autobiography (The Story of my Experiments with the Truth) itself furnishes a remarkable testimony to her tenacity and independence of judgement: “According to my earlier experience, she was very obstinate. In spite of all my pressure she would do as she wished. This led to short or long periods of estrangement between us. But as my public life expanded, my wife bloomed forth and deliberately lost herself in my work.”

4. We may be awed by Gandhiji’s achievements during his life, especially the success he delivered with his deep involvement in guiding the struggle for Independence that bore fruit. This understanding though must begin by acknowledging that Gandhi himself considered his own experiment with non-violence to be a resounding failure! The people of India had not taken non-violence to heart. They had at best practiced passive resistance, which Gandhi rejected because it left room for a pragmatic switch to violence.

In closing, here is a phrase for us to live by: “Watch your thoughts, they become words; words become actions; actions become habits; habits become character; character becomes your destiny.”These words, as a common quote, are attributed to Gandhi, though the most likely source is a verse of the Upanishads, where similar sayings are found. Possibly, Gandhi possibly ingrained such thought from his mother, an extremely pious lady, by whom he was deeply influenced.

Wishing Peace onto All.