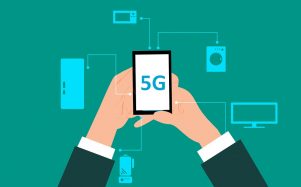 5G or ‘5th Generation mobile networks’ has become a buzzword that gets thrown around as a sign of the future; the next generation of communications that will let us connect faster to each other and transfer more data from one person to another. By putting this into a historical context, it is possible to see how we got here and what will come next.

5G specifically refers to the next generation of mobile networks, which provide us with calls, texts and data while we are on the move (i.e. not connected to a Wi-Fi network). Mobile networks have come a long way since the first generation, which could only carry voice messages. In the early 90s, 2G was standardised, which allowed us to send text messages and low quality picture messages. In the early 2000’s came 3G, and 3G+ which included video messaging and video calling, connecting us more to each other. Ten years on from this, 4G was launched in various incarnations in different countries, which allows us to do all the activity we do on the move today, such as gaming, high quality video calling and streaming. As this progression shows, the next generation will become faster still and will overcome many of the limitations of 4G, such as connection drop-outs in highly populated areas.

5G will operate at higher frequencies than its predecessors, which allows for more bandwidth (the amount of data transmitted in a given time), giving higher speed downloads. However, with a higher frequency signal, the range of the signal is reduced meaning that we will need more access points. Lampposts and bus stops will potentially become transmitters and receivers for data.

There are many potential benefits from 5G. The amount of time that can be saved with faster connections could free up billions each year from productivity savings. Autonomous vehicles which can communicate with traffic infrastructure using 5G could save significant amounts of time and be safer. The healthcare sector can benefit from remote health services, seeing time saved for GPs across the country. Connected home appliances such as smart fridges and waste bins can prevent waste, encourage recycling and save councils millions.

However, do we need to be more connected and where will this take us? On the one side, you have the engineers who want to push the boundaries of what is possible and to challenge themselves. However, they are often being funded by large corporations, who want this technology to access more customers, their data, and want to do this faster. We are already bombarded daily with directed adverts and emails, and with 5G there is the potential for more advanced advertising. Targeted augmented reality adverts appearing on devices within milliseconds could be a real possibility.

5G also means that we will be reliably connected to each other digitally, which can be beneficial, but sometimes those connection drop-outs give us a timely (albeit unintended) relief from our mobile devices. Furthermore, with more digital connections, are we also losing the ability to communicate face-to-face? We also have the dangers of more personal data being freely available which, when in the wrong hands could have serious and lasting consequences.

The face of the next generation of mobile networks is not yet finalised, with many challenges still existing, but the positive and negative potential of it is already evident today. It is inevitable that 5G will come, and it will most likely be followed by an even faster 6G, which is already being researched by academic institutions. Nevertheless, it must be ensured that this technology is not misused and exists as much as possible for the benefit of society, rather than to its detriment. This is something for which we are all individually responsible.