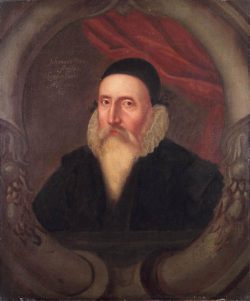 Earlier this year a remarkable exhibition was shown at the Royal College of Physicians in Regent’s Park, London: Scholar, courtier, magician: the lost library of John Dee.

Born in 1527, of Welsh ancestry, John Dee was one of Tudor England’s most extraordinary and enigmatic figures. A brilliant mathematician, he was offered the chair of mathematics at the University of Paris at the age of 23, but turned it down. Back in England he became astrologer to Queen Mary, but found himself accused of plotting to destroy the queen by sorcery. Though acquitted, throughout his life he found himself having to defend himself against this charge, which was punishable by death. After Mary’s death he became astrologer and physician to Queen Elizabeth I. For many years he was a favourite of the Queen, who called him ‘my philosopher’.

At Elizabeth’s court, he was the guiding figure of a network of Neoplatonist and Hermetic thinkers, as well as a sought after authority in the field of navigation in those days of transatlantic exploration and adventure. This network included the Sidney Circle, headed by Sir Philip Sidney, a soldier, courtier and poet, who viewed poetry as a kind of chanted magic, preferably accompanied by music, in order to elevate the psyche to the heavenly regions. This circle also included the poet Edmund Spenser (author of An Hymn of Heavenly Beauty) and Robert Dudley, Earl of Leicester, a lifelong friend of the Queen. Another circle was that led by the Earl of Northumberland (the “Wizard Earl”) and known as the School of Night. It included the adventurer Sir Walter Raleigh (founder of Virginia) and the poet George Chapman (author of The Shadow of Night).  Even Shakespeare seems to have been deeply influenced by John Dee: the figure of Prospero in The Tempest is believed to be a vindication of John Dee as a ‘good’ magician (as opposed to wicked sorcerer) and King Lear may be a portrayal of John Dee as an old man, rejected by all.

Dee’s view of mathematics was a mystical one: he saw numbers as the key to all knowledge. He believed that music, originating from mathematical harmonies, puts man in tune with the universal structure; it permeates his inner being and lifts him to new heights of perfection; hence Dee’s aphorism: “the world is like a lyre”. He was also an alchemist, an astrologer and, perhaps most famously, an “angelologist”. Working with a spirit medium, Edward Kelley, he wrote a diary detailing his conversations with angels. Among the exhibition’s artefacts were a crystal ball and a “scrying mirror” used for this work. But he was also a philosopher: his lengthy preface to the first translation of Euclid begins with the words “Divine Plato…”.

Dee claimed to have owned around 3,000 books and 1,000 manuscripts – a phenomenal number for those days when the University of Cambridge had only 451! He showed himself to be several centuries ahead of his time when he submitted a petition to Queen Mary to found a Royal Library as a repository for the most important books from around the world, and to protect ancient monuments as reminders of our past and an inspiration for the present. At the time, his petition was rejected, but his dreams are now realities.

The exhibition focused mainly on Dee’s books, about 100 of which came into the possession of the Royal College of Physicians by a bequest in the 17th century. We see in them the eclectic range of his interests, from philosophy to navigation, and also something of the tragedy of his life: while he was abroad, his house in Mortlake, Surrey, was ransacked by a mob and most of his library was lost. When he returned to England, he fell from Elizabeth’s favour and died in near poverty in 1608, in the reign of King James I. His achievements, however, had been very great: the inspiring genius behind the Elizabethan Renaissance.