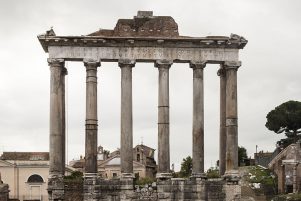 Many historians have highlighted the immense legacy that the Romans left to ‘modern’ man. With a bit of exaggeration, we could even say that mentally, politically, administratively, legally and artistically we Westerners are all pretty much Romans. This legacy, contrary to the still current ‘theories’, which portray the ancient Romans as a rough, warmongering people, ignorant of philosophy and concerned only with pragmatism, needs to be based on some different foundations. In this and the following article, I would like to give a brief overview of some aspects of Roman culture that form part of those other foundations, foundations that have a meta-historical (i.e. mythic), symbolic and sacred character.

The kind of legacy that the Romans left to us, the way they rose to become one of the greatest empires known to history, cannot be a matter of profane living. In the heart of the greatness that was Rome, we shall seek and find a spiritual dimension, with its metaphysical symbols and an esoteric tradition. Studying this tradition we will also find traces of the Ars Regia (Royal Art), the true hermetic science of Alchemy.

From the earliest times of Roman sacred history, not a ‘foreign’ (i.e. Greek, Persian etc.) but an Italic God – Janus, was the god of initiation into the mysteries (known as the God of Beginnings, from the Latin initia – to begin), he who opened and closed the Janua (door) of the initiation temple and guarded the heavenly gates. Janus was simultaneously the god of initiation into the mysteries and the Patron of the artisans’ guilds (collegia fabrorum), especially the masons’ and bricklayers’ guilds.

Related to masonry, we find the denomination of Pontifex Maximus, which originally designated the highest priest (i.e. hierophant of the mysteries). The Ponti-fex symbolized the one who not only built bridges (pons facere) across rivers but also traced out the road or path (in Latin, pons also means via or way). By using a bridge, the waters, symbol of man’s passional and transient nature, can be crossed. The apparently profane activity of building Roman roads refers to an esoteric teaching in which the initiate (the Pontifex) opens the way to the secret heart of Rome. Hence the saying, ‘all roads lead to Rome’.

Like the Greeks, the Latins spoke of the Four Ages (or Races) of Man: Gold, Silver, Bronze and Iron. This tradition identifies the period of the Golden Age with the Saturnia Regna (the reign of Saturn). In the legend, Saturn, after being dethroned by Jupiter and driven away from Heaven (i.e. Olympus), took refuge in the Italian region of Lazio. Once there, ‘King’ Janus, received him and together they ruled the country. To the inhabitants of Lazio, Saturn taught agriculture and navigation (water symbolism again!). Legends also speak of a very ancient people who inhabited the Roman regions and who were the last descendants of ‘King’ Saturn and the Primordial Tradition.

Virgil calls Saturn’s fields the Saturnia arva where ar-vum is the arable land.

To plough (arare) means to create furrows in the soil and expose it to the solar action (here the Sun is the symbol of the spirit). It is therefore necessary to ‘cultivate’ man’s inner potentials (the soil) in order to obtain spiritual fruits. The art of cultivation (peritia ruris ) of Saturn’s Field is the cultivation of man’s spiritual field.

Considering the occult and initiatic character of Saturn in astrology, we should not ignore the little known esoteric dimension of the Saturnalia (the ancient Roman festival of Saturn in December). Macrobius states that “it is not permitted to unveil the side of the Saturnalia which teaches about the arcane nature of the godhead but only what is disguised in fables and told to the common people… That is because not even in those initiatic ceremonies is it allowed to narrate the occult reasons emanating from the source of pure truth…” Through Saturn, says Macrobius, “from an uncultivated and dark life, we are released into the light.”

The symbolism of Saturn clearly points to the idea that the sapiential tradition derived from the Golden Age found refuge in the region of Lazio, where it remained hidden, to be later revived by Rome. We could say that in the midst of a rampant Kali Yuga (or Iron Age), where the forces of materialism took the upper hand and Greece was about to ‘lose’ her soul, Rome brought the vision of a ‘new’ Golden (solar) Age back to the West. Proofs of this are also the various etymologies related to the name Saturn. Saturn is connected with the Etruscan God Satre, which is also similar to the Anglo-Saxon divinity Saeter. In the old German language Satejar is the planet Saturn. Interestingly enough, the Sanskrit name for the Golden Age is Sat-ya Yuga. In Sanskrit, the Golden Age is also called Krta Yuga and the Greek name Chronos derives from the same Sanskrit root Kra. In summary, the Latin sate-urnus, the German saeter, and the Etruscan satre, all refer to the ‘true’ (Sat in Sanskrit) and ‘unchangeable’ (Sat again) doctrine as derived from the Golden or Primordial Age.

I leave you now to meditate on what has been covered so far and see you in the next issue, where I will say more about the occult origins of Rome and its secret name.