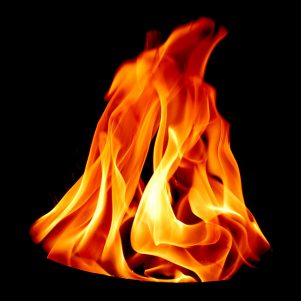 As the Sun rises over the horizon and fills the sky with its magical light, a 2000 year old ritual is performed daily in the few remaining Zoroastrian temples of Mumbai. The priest performs a ceremony (5 times each day), tending to the flames of the consecrated fire, offering fragrant sandalwood and incense while reciting ancient texts venerating the holy fire, ringing a bell nine times, rejecting evil thoughts, evil words, and evil deeds. Such veneration of fire, however, is not distinct to the Zoroastrian community. Many cultures around the world have worshipped fire in different manners over millennia.

Sitting around a campfire on a dark night watching the flames rise upwards, emits a reassuring warmth. But a rampaging fire in all its fury drives fear into our hearts. Overcoming fear and fascination for this element, human beings have observed volcanic eruptions, and lightning that strikes the earth, with awe and respect, resulting in the veneration of the element of fire as a gift of the gods. Harnessing the power of fire for human benefit was an important milestone in anthropological history.

Interestingly eight of the ten books of the Rig Veda start with a song in praise of Agni the god of Fire.

An ancient Greek myth speaks of Prometheus, who disobeyed Zeus’s decree, stole fire from the chariot of the Sun god Helios and gave it to man as a gift. This act of compassion, in the interest of Man’s progress, bore grave consequences and he is said to suffer a terrible punishment. The international Olympic Games commemorate this theft of fire in the lighting and consecration of the Olympic flame with the help of the Sun’s rays.

On a different continent, an Aztec myth speaks of the god Nanahuatl who jumped into a fire, sacrificing himself to become the Sun to set into motion the beginning of the fifth age.

And more recently, fire played an important purifying role in medieval alchemy that employed a special oven, the Atanor, a symbol of transmutation of a substance into a different element.

Today, we look upon these civilisations as backward or primitive, superstitious in their understanding of life.

However, perhaps ancient pantheism was but an expression of a deep way of life that celebrated the profound connection between Man and the universe. So too, perhaps the element Fire has a deeper meaning symbolized by, and manifesting in, the physical fire that we see. As a symbol, it allows us to discover the invisible and essential aspect of reality that transcends the transient illusion of form.

Ancient esoterism seems to emphasise the value of the mental fire, said to bring about intelligence and the objective discerning capability between the essential and the superficial, much like the physical fire which produces heat and purifies a substance. In the same way mental fire is said to burn away the unessential leaving behind the pure essence.

“O Ahura Mazda, the most beneficent spirit and the bestower of good things in return for prayers! Do Thou purify me (i.e keep me away from wicked deeds), owing to (my) gentleness (or humility) do Thou grant me strength, on account of righteousness bestow upon (me) mighty power (and) on account of (my) good thoughts grant me supremacy.” (3) (Zend Avesta, Atash Niyaesh – Homage to Fire)

Fire in Zoroastrianism plays a vital role. Zarathushtra, in his prophetic revelation, gave Fire a universal role and metaphysical meaning. Atash (Fire) is called Asha Vahishta, Cosmic Fire or Divine Essence of Ahura Mazda (the Supreme Being) which resides in every atom of the Universe. It is the source of all creation and is equated with Ahura Mazda’s own Inner Divine Light, which crosses the limits of time and space. The fire which we see is simply the physical manifestation of this Divine Light and is considered the son of Ahura Mazda sent to the Earth, to move creation forward towards its final goal.

Hence, Fire in Zoroastrian theology is a symbol of an inner flame that is honoured through the physical medium of the flames that burn in the fire temples, and is a medium to reach out to the Divine, reaching always upwards to unity.

Fire then, refers to the inner illumination through which God bestows wisdom and courage to man. One prayer which devout Zoroastrians recite every day reads: “Who will, O wise One, give me protection, when the deceitful threatens to harm me, other than your Fire and Mind?”

The sacred hymns composed by Zarathushtra speak of the mental fire, “The happiness You grant has been promised…through Your mental fire and righteousness.” The words for “mental fire and righteousness” in Avestan are mainyu athra-cha, asha-cha which literally mean “through mind, through fire, and through Asha (righteousness).” [Yasna, Ch31.3] The universal laws of Asha govern and bring order to material existence and refer to the individual’s ethical choice, to align thoughts, words and deeds; principled, honest, beneficent, ordered, lawful living.

Today such consecrated fires are housed in Fire temples or sacred structures known as Dar-e-Meher. Dar etymologically originates from Avesta, dvara, (Sanskrit: dvara, German: Thor, English: Door) and Meher refers to Mithra who in Zoroastrian angelology, is the Yazata presiding over light and justice. So the term literally means ‘the door of light.’

Each of these temples consists of a fire consecrated through carefully conducted ceremonies conducted by priests, meant to unleash the spiritual energy of the fire. The Highest Grade of such temples maintain a fire that comprises sixteen different types of fire, and is dedicated to Verethraghna, (Archangel of Victory) and is called Atash Bahram.

All fires are regarded as warriors, fighting for the preservation of creation against the forces of darkness, not just on the physical plane. Having undergone the ceremonial purification each fire acts as a Talisman against the force of ignorance. As per Zoroastrian tradition, mankind thus shares with the angelic divinities the great common purpose of gradually overcoming evil and restoring the world to its original perfect state. The glorious moment when this will be achieved is called Frasho-kereti a term which can be interpreted as ‘Healing’ or ‘Renovation’.

In the 10th Century C.E., the ancestors of the Parsis left their motherland Iran and landed in Sanjan, (Gujarat, India) in order to preserve their religion. After establishing themselves for a few years they sought to establish a house of worship, Atash Behram (Fire of Victory). Having arrived in India lacking the ceremonial apparatus required, they sent high ranking Priests to Khorasan (Iran) and brought on foot the ritual apparatus (Aalaat) to be used for the consecration.

The rituals formulated for the consecration of fires appears in the ancient scriptures called Vendidad, 8th Pargarad (73-96), where it is prescribed that fires used by different tradesmen be collected, ceremonially purified, and then enthroned.

The 16 fires are collected from:

1) Fire from the pyre of a burning corpse

3) Fire from the house of a king or ruling authority

4) Fire from the potter’s house

5) Fire from a brick maker’s hearth

6) Fire of a fakir or an ascetic house

9) Fire from an ironsmith’s hearth

10) Fire from an armourer’s hearth

12) Fire from hearth of a brewer or distiller

13) Fire from a soldier or traveller’s house

14) Fire from a shepherd’s house

15) Fire from the house of any Zoroastrian

Each of these fires represents a different cosmic energy, to which it is linked through electro-magnetic currents, or invisible thermal waves, said to be generated by the spiritual alchemy of the consecration rituals. For instance, fire from a brick maker’s kiln is linked to the cosmic energy of Atash-e Spenisht (Fire of the Earth). Similarly a goldsmith’s fire is linked to Atash-e Burzin Mehr (Fire of the Radiant Sun). A consecrated goldsmith’s fire is believed to magnetically attract the Energy Burzin Mehr which resides in the core of the Sun. An Atash Bahram therefore, is a spiritual receptacle of cosmic energies.

Flames from each of the above fires are collected, and purified through elaborate ceremonies. To do so, a small pit is dug in the ground open to the wind, called a Pahadia, in which each of the fires will be placed. By its side, and in the windward direction, another pit is dug, heaped with myrrh, frankincense, and sandalwood shavings. The heat and the blaze of the fire from the first pit, is carried by the wind and ignites the heap of the combustible materials in the 2nd pit. This process is called ‘passing through one Pahadia’. Each type of fire must be passed through a prescribed number of Pahadias. For example, the fire of lightning is passed through 90 times before it can be used. Fire from the hearth of the brick maker is purified 75 times before it can be used. The final total of all the purification iterations is a staggering 1128! Additional consecration rituals are performed once all 16 purified fires are co-mingled for its further enthronement. (5)

The innermost chamber, the Sanctum Sanctorum, of the Fire Temple where the sacred fire is to be enthroned must also be consecrated. That consecration ceremony lasts three days. Through the use of Manthravani, chants, and through the dynamics of heat, conduction, sound, magnetism through fire, water, metal, the spiritual purity of the officiating priests and environment, and other occult aspects, these earthly fires are believed to release their corresponding cosmic energies which previously lay dormant.

The Sacred Fire, once enthroned, is metaphorically similar to a Kings court, wherein the King presides over his spiritual jurisdiction. The stone slab on which the fire stands, is considered the throne (Persian: Takht). Its ceiling in the form of a dome, is reminiscent of the celestial. From that dome hangs a tray, spoken of as the crown (Persian: Taj) of the Sacred Fire, the symbolic representation of a spiritual ruler. Spears, swords and cow headed maces adorn the walls of the inner chamber, signifying man’s obligation to fight moral evils and vices, with the help of the spiritual weapons of Truth to emerge triumphant.

The resulting fire, the Atash Padshah (Emperor), is venerated as a Divine Being with an energy and consciousness and is perceived as the actual presence of the life animating principle of Asha, Truth. It denotes wisdom, and dispels the darkness of ignorance, and bearer of warmth and the light of order and cosmic intelligence.  Devotees reverently apply its ash to the forehead to invigorate oneself towards the path of Truth.