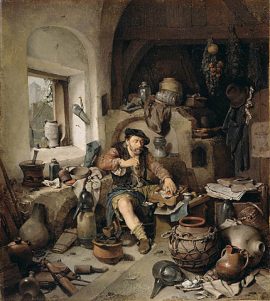 Alchemy has a reputation from the Middle Ages. We can imagine obscure medieval laboratories with alchemists driving themselves to madness by spending  years trying to achieve the impossible – the transmutation of lead into gold. This is one side of the story…

In fact, alchemy has been around for thousands of years. It was not only a medieval underground movement, but the royal science (ars regia) in the ancient world from Egypt to India and China. It has always been closely connected with medicine and astrology. The alchemist’s main object of enquiry was Nature and its unchanging laws which govern the whole of the universe. To find and to understand those laws ultimately implies  an inward journey, which means that alchemy is in the first place a spiritual discipline, while knowledge and scientific research come as secondary. The urge to inner transmutation comes from within each human being. This is where the fire burns and transforms. In a sense alchemy follows one of the maxims of ancient Greek philosophy: “Know thyself… and then you will know the universe and the gods.” Psychologically, the process starts with directing oneself to find self-knowledge. “Visit the interior of the earth, and by rectifying you will find the hidden stone which is the true medicine.” (giving the Latin acronym VITRIOLUM).

In the inward journey the alchemist goes through a purification. As in Buddhism or any other spiritual practices it is recommended to start by purifying oneself from egotistical tendencies which distance man from his eternal nature. In alchemy this is depicted as entering the deep earth, symbolically speaking being buried: to die and be put into the ground. “Everything that has life dies; everything that is dead putrefies and finds a new life,” Said Antoine-Joseph Pernety.

When one has mastered one’s personality i.e. killed the dragon, one has started the Great Work, resulting in a new ‘birth’ or new state of consciousness. In some traditions they would call this yoga (from the Sanskrit jug, union). In alchemy they speak of the Divine Marriage and obtaining the philosopher’s stone.

“As there is oil in sesame seed

and a spark in flint

thus your Beloved is in your body.

Wake it if you can.

As the pupil is in the eye

so is the creator in the body.

The fool does not know this secret

looking for it in vain.

That what you seek

is in the four corners of the earth.

you do not see it,

because it lives behind the veils of illusion.”