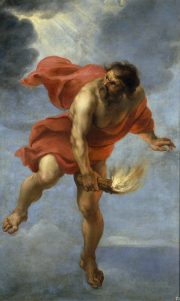 Busy as we are, it’s not easy to stop to admire the awakening of life in nature, but the growing light seems to be rekindling us too. Ancient myths tell us a story of another awakening that took place a very long time ago – the awakening of the human mind.

One courageous, quick-witted and compassionate Titan dared to challenge the all-powerful ruler of the cosmos, Zeus. Out of love and care for the humans whom he had created on the instructions of Zeus, Prometheus stole fire from Olympus, the home of the gods. Thanks to this fire of creative power the whole of human civilization has developed. But the story tells that with fire, the time when humans had lived happily without any toil, illness, war or death, came to an end – they became separated from the gods.

Prometheus’ previous service to Zeus (he had assisted Zeus in his war against the titans and had helped Zeus’ beloved daughter Athena to be born) did not save him from the god’s wrath – the mighty Titan was chained to a mountain in the Caucasus and every day an eagle devoured his liver, which then grew back again during the night. This punishment lasted for many ages until Heracles, the symbol of a new and better man, came to liberate the benefactor of humanity.

His name, “Prometheus”, means “forethought”. In the myths he is contrasted with his brother Epimetheus (“afterthought”), who acts first and only thinks afterwards. This means that Prometheus was very well aware of his actions and their possible consequences. But he could not allow humans to live in the darkness of ignorance with their minds deeply asleep. Let us cherish his divine gift of mind.