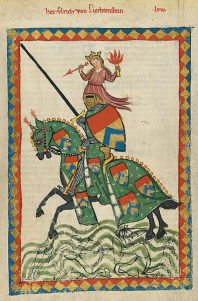 The word ‘chivalry’ comes from the French ‘chevalier’, which means ‘knight’ or ‘horseman’. Symbolically, the horse represents the body and its associated energies and emotions, while the rider represents the higher self of the human being, the best and noblest part of ourselves. The knight is not perfect, but is on a path towards perfection. Hence the trials that all knights go through. They sometimes fail, especially in the phase of the Quest of the Holy Grail, and sometimes they get another opportunity and then partially or wholly succeed. In the view of esoteric philosophy, the human being is perfectible; indeed, our destiny as human beings is to develop the divine part of ourselves. All this was symbolized in the esoteric art par excellence, namely alchemy: the transmutation of the man of lead (earthly, heavy and opaque) into the man of gold (shining, incorruptible, pure and endlessly giving like the sun). It is therefore not surprising that we will find many traces of alchemy in the tales of chivalry. As J.E. Cirlot says, “Knighthood should be seen, then, as a superior kind of pedagogy helping to bring about the transmutation of natural man (steedless) into spiritual man.”

The hallmark of chivalry is nobility – not of blood, but of character. And what is nobility of character but the mastery of one’s lower traits by the higher, not giving in to base impulses, always striving for the good? In this sense, it is not only a product of the European Middle Ages, but a universal ethical vision. However, chivalry is best known as a medieval phenomenon, with a historical aspect and mythological aspect.

Historically, the ideal of chivalry arose after the fall of the Roman Empire, in response to the increasing barbarism of the Dark Ages. This was the setting for the legend of King Arthur and his Knights of the Round Table, which is widely accepted as having some basis in historical fact. As Ramon Llull writes in his classic Book of the Order of Chivalry, “There was once no charity, loyalty, justice or truth in the world. Enmity, disloyalty, injustice and falsehood came into being… [and when this happened] justice sought to recover its honour.” Thus, chivalry comes to restore justice, harmony and truth in an unjust and brutal world. The peak moment of the popular revival of chivalry, however, came around the twelfth century. Most scholars agree that it was inspired by the Islamic world, at that time a flourishing civilisation, which the medieval Europeans encountered through the Crusades.

From around this time came a massive revival and popularisation of the “Arthurian cycle” of stories, based on older sources but now put into literary form. The typical knight goes through trials and difficulties, often in the context of magical adventures, where he has to overcome impossible odds.

One example of this is the story of Sir Lancelot and the Dolorous Garde. This is the name of a castle which is under a curse. Many knights have attempted to lift the curse but none has succeeded. The test consists in having to fight his way through three gates, each of which is defended by ten knights. Lancelot (in this tale known as the White Knight) only succeeds because he has the help of a damsel who has been sent to his aid by the Lady of the Lake. She gives him three shields which will double, triple and quadruple his strength when it is failing.

Usually, in these stories, and in mythology in general, the damsel represents some higher element of the soul, a spiritual element which can help us in our hour of need. It is represented as a damsel, or virgin, to symbolise the purity of the spiritual element.

Then a strange and mysterious figure appears: Brandin, the “Copper Knight”, the ruler of the Dolorous Garde. He appears on a wall, disturbed by Lancelot’s success and, leaning over too far, falls on top of one of his own knights, killing him. Why copper? Each of the metals has a part to play in the alchemical process and is associated with one of the planets, in this case Venus. The symbolism of alchemy is highly complex and I will not attempt to decipher it here, but this “Copper Knight” is too incongruous to be anything but alchemical.

Finally, Lancelot triumphs and is led to a cemetery where the failed knights are buried. There he is shown a metal slab (metal again!). On lifting it he finds out the name of his true father, i.e. his real identity. In other words, the end of all these trials is to discover who we truly are – a question which I think many of us would love to be able to answer.

There are many such strange stories in the Arthurian legends. In the story of Parzival, by Wolfram von Eschenbach, at one point the hero finds himself in a room in a castle, when suddenly the floor begins to rotate. It gets faster and faster until he has to cling on for dear life in order to avoid being dashed against the wall. In some accounts of the trials to which candidates for Initiation were subjected, the trial of the rotating floor is not uncommon. In another Lancelot story, he has to cross a “sword-bridge” over an abyss, at the end of which two lions are waiting to devour him. His love for Guinevere (the spiritual soul?) gives him the courage to cross this painful bridge. But when he arrives at the other side, fully expecting to have to fight the lions, he finds that they have vanished; they were only magical illusions needed to try his courage. How many of our fears are illusions, created by our own minds?

There are also many intriguing images associated with chivalry. The one shown opposite, from the Manasseh Codex, shows a female figure with an arrow and a flaming torch above the head of

the mounted knight. The figure almost certainly represents Venus (sometimes shown in alchemical texts with the “arrow of the secret fire”), the inspiration for the courage of the knight. Below his horse is a kind of watery (inner/astral?) world in which two demon-like figures – or one demon and one man – are battling each other, the demon pointing the arrow and the man, or other demon, defending himself with his shield. This illustrates the fact that chivalry was not only about external battles and adventures, but also, and perhaps most importantly, about the inner battle between the higher and lower selves of the human being.

Ramon Llull states that the virtues of the knight (his inner conquests) are more important than his physical prowess: “Therefore the knight who practises these things that pertain to the Order of Chivalry with respect to the body but does not practise those virtues that pertain to Chivalry with respect to the soul is not a friend of the Order of Chivalry.”

There is also a rich symbolism of colours, again associated with alchemy. In Mallory’s Morte d’Arthur, Sir Tristram fights in a tournament and on different days and times arrives dressed in different colours, particularly green, black and red (generally in that order). Several authors believe that this is not just “for atmosphere”, but is related to the stages of the alchemical work. These could be: green – the universal solvent, as in the Green Lion; black – the nigredo phase associated with “germination in darkness”, and red – the rubedo phase, associated with the final stage of the work, or “exaltation”.

And what is the goal of alchemy? The Philosopher’s Stone, which symbolises the achievement of all powers, the mastery over oneself and nature; the power to heal, to make whole and even to prolong life. It is interesting, then, to note that in Wolfram von Eschenbach’s Parzifal, the Holy Grail is described not as a chalice but as a stone. The Grail, like a cauldron of plenty, has the power to nourish endlessly and, if the right questions are asked, to heal the King (the Self) and the Kingdom (the World).

Thus, to have a vision of the Holy Grail is equivalent to achieving the Philosopher’s Stone. And to get to that goal, the knight must become absolutely pure, like Sir Galahad. In the view of the esoteric philosophy, this is not impossible. It is the fruit of a long labour of purification, symbolised by the trials and adventures of the knight.