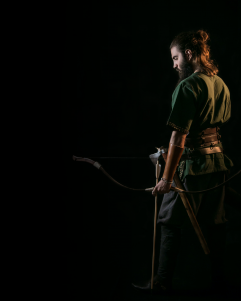 First establish being in yourself, and only then perform action.

Amidst a series of mystical verses compiled in the Bhagavad Gita, this is one of the fundamental instructions that Krishna transmits to a distraught Arjuna, when faced with the prospect of killing his own cousins in the battlefield of Kurukshetra, in order to reinstate dharma in the kingdom.

The philosophical tradition suggests that beneath this storyline lies a deeper dimension, revealed only to one who knows to unravel its mysteries, by turning inwards, to the inner Kurukshetra, within the human being. Captured within the elaborate mythology is a fundamental truth about the human condition, characterised by an inner battle between the Kauravas (the innumerable human vices, and the cause of ignorance) and the Pandavas (the divine potential), between non-truth and Truth.

In order to manoeuvre through this inner battlefield, the protagonist Arjuna serves as a symbol of a human hero – a mighty warrior accomplished specifically as a legendary archer. Hence, when the same tradition offers a dedicated volume on the art and science of archery, it certainly warrants a deeper look, for anyone seeking to “establish being in yourself”, as an elementary step in the preparation to charge into the inner battle.

The word Dhanurveda literally translates as “Knowledge of the Bow”. It is considered a supportive text that supplements the Yajur Veda (Book of Ritual), one of the 4 primary canons of Vedic Literature. At first glance it appears to be a technical treatise documenting the ancient science and practice of archery. It elaborately details various kinds of bows, arrows, targets, postures, and various usages of each, and even includes recommendations on auspicious moments to commence the study of archery. Pupils are given a well-rounded holistic training, so that they are equipped to respond to all situations.

However, to reduce Dhanurveda to a simple catalogue of weapons and battle strategies would be a mistake. Like in any practice, it is easy to imagine that the discipline and practice required in archery training facilitates the development of the human being, physically and mentally. Although this by itself is an audacious work, when considered in the context of the Vedic tradition, it seems that even this difficult work is akin to the preparation of a well-formed vessel; it is ultimately meant to be used to carry something of value; in this case, a purified human consciousness.

Dr. John Douillard, author and scholar of Yoga and Ayurveda, says, “When you fully draw a bow back in an attempt to shoot an arrow…You must hold and establish that arrow and bowstring into a state of absolute stillness or silence. The slightest movement of the bowstring will create an exponentially distorted flight of the arrow.”

It must be noted that it is not enough to understand this. It demands actual practice and perseverance, because generally the mind is reactive, calculating, ever-busy attached to the past, anticipating the future, and rarely in one’s own control. We might describe it as concentration, or as an ability to dispel distractions caused by attachments. Douillard explains, “The minute we let the mind wander, be distracted or think about the outcome, the mind instantly attaches itself to the fruits of that action. The mind will seek the reward, the satisfaction of hitting the target, the return on investment…every action becomes a manipulation of the environment to deliver a reward.”

And so in the practice of wielding the bow, the pupil begins to transform himself, with self-control, concentration, and inner stability. The motivation of each action is gradually purified, such that it emerges not from attachment, fear or anticipation, but from stillness. It is from this meditative state of “establishing being” that the archer is able to perform right action, the release of his arrow. This is perhaps the most important part of meditation, often neglected in our times – the imperative to act. Such right action becomes the reward in itself.

One might turn to the Manduka Upanishad to reveal more clearly the larger goal, a spiritual purpose, of this solitary practice.

Take up the mighty bow of the Upanishad, place upon it an arrow [Mind], sharpened and straightened,

Draw back the bow string, mind suffused in Brahman, the goal, let fly and pierce [know] it unerringly.

The practice is the Bow, you are the Arrow, Brahman [Truth] is your target,

Hit it unerringly, become one with it.

We find therefore, that ultimately the human tradition has unceasingly whispered through the ages, the need to cross the distance of ignorance, by acquiring living knowledge, an inner realization that results from experience. The mastery of archery, and the system described in the Dhanurveda, can serve as a symbolic and formative practice, to “establish being in yourself”, transcending the transient masks, in order to facilitate this transformation.