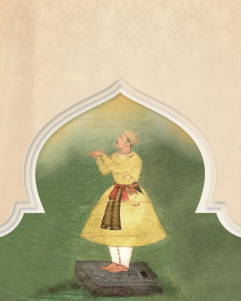 During the Renaissance, while Europe was experiencing a gigantic shift of ideas in almost every aspect of knowledge, in India, was born a man who, as Emperor of Hindustan, would use his indomitable courage and a restless search for wisdom to weave a similarly audacious social, political, and spiritual vision in the Indian subcontinent. His name was Abu’l-fath Jalal-ud-din Muhammad Akbar.

There is much that has been documented to justify the appellation Akbar, The Great. During his lifetime, scribes, artists and poets were commissioned to record his life and chronicle the events and circumstances of his reign. They accompanied him on battlefields and hunts, and were ever present in court, to capture his images, his words and his deeds in a treasure trove of material that gives us an insight into the many facets of this evidently extraordinary human being: the ruthless Mughal conqueror, the solicitous and liberal Hindu Raja, the unschooled but enlightened Sufi mystic, the generous patron of a unique blend of Indo-Persian culture, the iconoclastic founder of a revolutionary syncretic religion. But is the sum of these parts a true reflection of the heart and sinew of the man? Or are these separate glimpses all denotive of a deeper unifying purpose, a higher motivation that was the driving force and the fuel of his life?

Historians mostly agree on the facts: Akbar the Great, the third Mughal Emperor of the Timurid Dynasty, that traced their lineage to Timur, son-in-law of Genghis Khan, was 13 when he inherited the throne from his father Humayun. As a young prince, he was a spirited, unruly, and distracted youth. Instead of learning mathematics, history and philosophy under royal tutelage befitting a Mughal prince, Akbar remained illiterate, and spent his childhood hunting, taming wild elephants, hawking, and racing pigeons. It is ironic therefore that as a king he would oversee the writing, translation and illustration of extraordinary works, as well as generously patronize artists, musicians, and poets at his court. In addition, he owned a library of 24,000 books in Hindavi, Persian, Greek, Kashmiri and Arabic, which he would absorb by listening to recitations and discussions.

By the end of the 16th century Akbar ruled over what was arguably the largest and wealthiest empire in the world. Between battles that served to consolidate his expanding empire, Akbar revelled in spectacular and extravagant organized hunts called Qumarghas. These were an effective display of Mughal pomp and power, as well as a way to assess the battle worthiness of local rajas in their home territories. Therefore it was astonishing when in 1578, at the age of 35, just before entering onto the hunting ground, he suddenly cancelled all arrangements and commanded that not a single animal or bird be harmed. (1) Abu’l Fazl, court historian, intellectual and author of Akbarnama called it ‘a Divine flash of light’. Muhammad Arif Quandahari, court chronicler and author of Ta’rikh-i-Akbari describes it as ‘a divine call’, and even Abdal Quadir Badauni, poet, translator and author, known to have been critical of Akbar’s religious views, described it as a ‘state of Grace’.

From all these well documented accounts it seems that Akbar experienced what might be called a sort of  spiritual epiphany that would change the course of his rule. From then on he invited scholars and thinkers of all religions and sects to the Ibadat Khana, the House of Worship. Sufi, Sunni, and Shiite scholars  engaged in complex discussions and arguments with Brahmin, Jain, Buddhist, Zoroastrian, Jewish and Christian thinkers, so that Akbar had the opportunity to assess the validity of their various beliefs. From these interactions Akbar concluded that “There are wise men to be found in all religions, and men of asceticism and recipients of revelation and workers of miracles are found in all nations.” (1) This became the foundation for the principles by which henceforth Akbar would govern his empire; all people could live and worship God as they pleased, and in all legal matters, people of all religions would be treated equally, resulting in a social, cultural and spiritual freedom that historians agree was unprecedented at the time.

Is it possible that the ‘flash of insight’ that Akbar’s court chroniclers referred to, far from being an isolated, inspired revelation, was really a culmination of an ongoing pursuit of a man consumed by a search for something greater?   Could his inner compulsion to spend his childhood in close proximity with nature have been an impulse to see and experience life for himself, rather than through theory and formal learning? This seems to have continued into adulthood also, for Henriques the Jesuit priest who visited Akbar’s court at Fatehpur Sikri, wrote that the emperor could often be seen “shearing camels, hewing stones, cutting wood, or hammering iron, with as much diligence as though engaged in his own particular vocation.”(1) The early exuberant curiosity of the child would find maturity in his youth, for Akbar himself wrote that “On the completion of my twentieth year I experienced an internal bitterness, and from the lack of spiritual provision for my last journey, my soul was seized with exceeding sorrow.” Until finally, the extensive philosophical and religious arguments in the Ibadat khana perhaps convinced him of the integrity of life, leading him to proclaim, “Truth is an inhabitant of every place.” (1)

What could possibly make an opulently wealthy, all-powerful monarch indulge in all these activities?  Was this restlessness and melancholy emblematic of a deep disquiet? Was his subsequent immersion into spirited spiritual debate a search for meaning? Perhaps Akbar found some answers in the principle of Harmony and Unity, embodied by Sulh-i-kul and which he strenuously strived to impart into all aspects of his rule, weaving it into the religious, social, economic, political, and artistic fabric of the times.

The great Mughul Emperor evidently began fashioning for himself a new identity that reflected the cosmopolitan nature of his beliefs. He began his day with the Hindu ritual of worshipping the morning sun. He wore a tilak on his forehead, a rakhi or protective thread on his wrist, and prohibited the slaughter of cows. He decreed that a sacred fire be maintained at Fatehpur Sikhri in consonance with Zoroastrian ritual. He kept fasts in the tradition of Jains and Buddhists, repeated mantras and examined his conscience in an effort to find a code of ethics that would make him a better person, and a worthy king to his subjects. (1) In a letter to Philip II of Spain he wrote that good emperors must pursue “the possibility of ascertaining the truth, which is the noblest aim of the human intellect.” (3)

Harmony also reflected concretely in matters of state  and in the diversity of his courtiers; men whose Hindu, Muslim, Rajput, Irani, and Turani lineages would normally translate into conflicting temperaments and beliefs, were nevertheless able to administer and co-ordinate their obligations and duties effectively. To the dismay of court clerics Akbar abolished  the jaziya tax collected from  all non-Muslims, and the pilgrim tax collected at sacred Hindu sites, proclaiming it was morally wrong to penalise anyone in search of the light of God. (2)   Highways with rest houses were built to ease the plight of travelling on pilgrims, and caravanserais were built to house and feed the poor.   In addition, forced sati was forbidden, widow remarriage permitted, and the legal marriageable age was raised to 16 and 14, for boys and girls, respectively.

In his Maktab Khana, House of Translations, a unique strand of Indo-Persian literature was coming into existence; an elite circle of writers and theologians began the translation of the Mahabharat and the Vedas from Sanskrit to Persian; Akbar believed that “harmony would be encouraged, if Muslims would become familiar with this ancient system of thought”. To further this spirit of understanding and accord, Akbar ordered translations of Persian, Arabic, Greek volumes so that all “could have the pleasure of benefitting and seeking the Divine Truth.” (1)

Accompanying these translations, would be sumptuous illustrations in a mix of Persian and Indian styles, also reflecting the influence of the west. Akbar’s Tasveer Khana was filled with artists, working painstakingly on miniatures with pigments made from pounded gold and silver, lapis lazuli, copper and saffron. Calligraphers and scribes were commissioned to copy the sacred Koran. A style of Architecture called Akbari, an amalgam of Hindu, Buddhist, Jain and Islamic characteristics began to mould the landscape of Hindustan in the form of mosques, temples, palaces and garden tombs.

So deeply was Akbar inspired to reconcile the differences that divided his empire, and so convinced of the correlation among different faiths, that he even dared to propound a new religion called Din-i-Ilahi, said to be a synthesis of elements drawn from Islam, Hinduism, and Zoroastrianism, but also including tenets from Buddhism, Jainism, and Christianity. More than a religion it was a personal moral code, to be adopted completely by choice, that sought to build fraternity, and weld together the diverse communities that made up his empire. (1)

Throughout history, when a civilization is on the rise, there is often a leader whose astonishing daring and unflagging energy are crystalized in building a conducive environment, not just for a few, but for ALL who seek to uplift themselves, and raise their consciousness. They tend to be controversial figures, for they row against the tide, churning the waters around them, as they churn within themselves, delving deeply to find the light. To me, Akbar was undoubtedly an extraordinary king in constant churn, and he has been judged for it many times over. Islamic purists have vilified him, myths and legends have deified him, Bollywood has romanticized him, and the tongue in cheek folktales of Akbar and Birbal have humanized him.

However he is viewed, Akbar remains a great enigma and an inspiring exemplar; A philosopher – king, whose life was marked by a sincere search for unity and harmony, and a relentless courage to give it manifestation; A mighty monarch who persistently honed himself to discern the essential from the nonessential; An emperor whose belief in rational investigation equalled his deep and abiding faith in God; A ruler who steadfastly chose tolerance over prejudice, empathy over indifference and unity over separation; And ultimately for us today, a visionary from the past, whom we could justifiably look to, for lessons concerning our future.