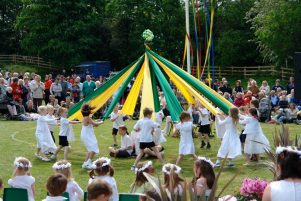 This May, there will be celebrations across small villages in Yorkshire, Nottinghamshire, Worcestershire and many other places around England, with folk dances, local food, communities coming together, marking the time of spring being established and moving into summer. Most of the May Day celebrations in England have their roots in Celtic traditions. Maypole dancing is one of the May Day celebrations which is still performed not only in England but also in Germany, Austria, Spain, Scandinavian countries, the United States and perhaps in other places that we may not know of.  These celebrations are usually performed in the spring, but might also be performed at other times with some modifications.

Traditionally, the preparations start with finding a tall wooden pole which is erected as a maypole. In some cases the maypole is a permanent feature that is only utilised during the festival, in other cases it is erected specifically for the purpose before being taken down again. Then the pole is decorated with garlands of flowers and leaves. These are known as ribbon-less maypoles and dancers simply circle the maypole in time with the music which is often provided by pipe and tabor, fiddle and any other instruments that can be found. Later, ribbons are attached to the top of the maypole and dancers wind in different directions around the maypole, each holding a ribbon to create a complex pattern of colours. These dances were said to be performed to ensure fertility as part of the spring rituals. They are also part of the celebration of the fact that the darkness of the winter is gone and the warm, strong light of the Sun is back, so the fertility of the land can continue. On a non-material level it is a celebration of rebirth. The colourful ribbons represent the higher spirit, the dance that takes place to create the complex pattern of colours. Retracing the steps back to unravel the ribbons is considered to be the journey of life.

In some traditions the top of the maypole might be decorated with a red cloth, an egg or could take a form of a cross. Dancers run and climb up to the top to get the treasure. This climbing is also seen in shamanism in Slavonic countries, representing an ascent to heaven or to reach the end of the spiritual path.

Another meaning of the maypole is the term used to refer to the centre, the pillar of the world: Axis Mundi, the world axis. Axis Mundi is considered as a bridge between heaven, sky or the celestial planes and the earth. It has been used by many traditions and sometimes took the form of a mountain, a plant or a human figure. The maypole mostly took the form of a Tree of Life which connects heaven and earth and brings life on earth. According to Mircea Eliade “every Microcosm, every inhabited region, has a Centre; that is to say, a place that is sacred above all.” Axis Mundi is the spot one occupies that stands at “the centre of the world”.

Whether it is the celebration of the spring, fertility, vegetation, rebirth or a ritual of one’s spiritual journey, a connection between heaven and earth, traditions can give us a hint to help us understand life better, whether on an individual or a cosmic level.