The Mithraic Mysteries have their roots in the remote Vedic culture of India. Already in the Rig Veda, we find the god Mitra as regent and protector of a perfect cosmic order.

Subsequently, in the Indo-European tradition of Iran, we find Mithra identified as the tutelary god of the pact (or oath), slowly assuming a more prominent warrior status.

The contact between Mithraism and the Western world occurred through the expansion of the Roman legions (roughly from the 1st to the 4th century AD). Thanks to influences from the Greco-Roman mystery tradition and the Neoplatonic teachings, an authentic initiatic path, reserved for the chosen few, was forged.

Written sources about the Mithraic mysteries are very scarce, but iconographic findings abound. Obviously this ‘visual’ material can be interpreted at various levels: at the theogonic level (concerning the birth of the god), cosmogonic (concerning the birth of the cosmos), astrological (related to the ascent of the soul through the planetary spheres) and initiatory (related to the inner transformation of the adept in the mysteries of Mithras). For reasons of space, I will deal with aspects concerning the latter approach only.

Following the alchemical tradition, Mithras is born from a stone (petra genetix). We find him portrayed as a boy who, at birth, carries in one hand a torch and in the other a dagger (Image 1)

. The god born from a stone refers to the idea that his body is the temple of the spirit. From this temple, the light or divine spark latent in him will manifest. The birth of the god happens next to a river, symbol of the currents of becoming (recalling the Buddhist concept of samsara). Detachment from material conditionings and the abandonment of earthly attachments is preparatory to a new beginning and a ‘new life’. The birth scene is complemented by representations of shepherds who pay homage to the god. The shepherds can be seen as symbols of spiritual presences, assisting the initiatory rebirth of the adept, which nevertheless has to be a self-willed act. 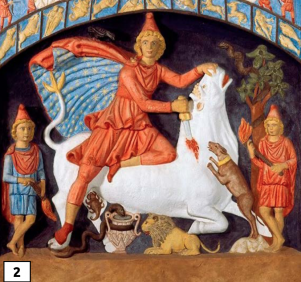 The central scene found in all Mithraea1 is that of Mithras fighting and killing the ‘sacred’ bull (image 2).In this scene Mithras after climbing on the animal’s back and having received the order from the sun, enters in a cave and kills the bull. In the act of sacrifice, Mithras points his gaze away from the bull and towards the Sun. From the tail and blood of the bull, ears of corn are born, to symbolise the ‘new life’ arising from death. The flesh of the killed animal is then consumed by Mithras and the Sun in a ritual banquet (image 3). 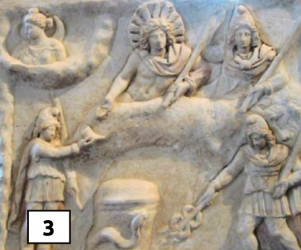 In the act of killing Mithras face shows an expression of pain and suffering. As commented by Porphyry, in this scene, the god secretly mourns the birth of life. In order for the spiritual life to be born the sacrifice of the bull (symbol of the lunar self or personality) is unavoidable. For those who have fully committed themselves to the call of the Sun (one’s higher self) there is only one choice, to kill out the desire for (mundane) life in order to really ‘live’ in the life of the spirit. For those who have embarked on the initiatory journey, the act of dying to oneself, of supreme renunciation and inner transformation, is a painful but necessary act.

To ride and tame the bull symbolises the ability to re-polarise   one’s lower nature while the act of killing the bull coincides with the release of the solar force within the adept. As a reminder that this ‘new life’ is in a delicate state of balance, we also see in the scene, a snake, a dog and a scorpion threatening this ‘solar release’. These animals are the chaotic forces of the adept’s inferior nature which are in a state of latency but always ready to regain the upper hand.

The Seven Initiations into the Mysteries of Mithras

As in many esoteric teachings, the number seven assumes an important role in the mysteries of Mithras. In the Mithraic complex at Ostia (Italy) we find references to various mithraea with names like: seven spheres, seven gates and seven rungs (this last one is known as the Mithraeum of Felicissimus).

The seven initiatory grades were associated with the seven planets and their tutelary deities, seven metals, seven musical notes and possibly seven colours. All these ‘secret’ correspondences (with Pythagorean, Platonic and Orphic origins) were taught in the Mithraic mysteries.

The figures on the mosaic floor of the Mithraeum of Felicissimus (fig. 4) present us with clear indications regarding the various degrees of the Mithraic initiations. I will try to give some indications regarding the esoteric meanings of these symbols. As we proceed with the interpretation I would like to invite the reader to think of these symbols not only as allegorical concepts but also as real inner experiences and trials undertaken by the initiate. 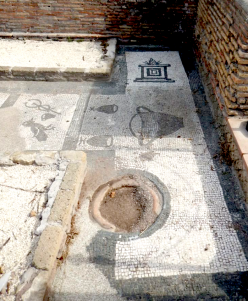 The first figure that we see at the entrance can be interpreted as a circle or a wheel. This circular figure could allude to the doctrine of the cycle of rebirth (or transmigration as taught in the Mithraic mysteries). Being located at the beginning of the initiatory path, this symbol reminds us of the unique opportunity that is given to the neophyte to ‘escape’ from the wheel of samsara. Ultimately, this is the goal found at the end of each initiatory journey.

The second figure, found at the entrance, is that of a vase (or krater), a symbol of the primordial matrix in which the germ and (karmic) seeds of all life forms have been deposited. 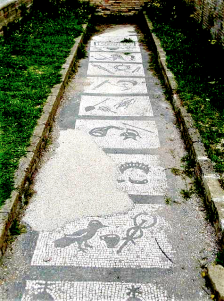 Finally, still at the entrance, we find a burning altar, a clear reference to the sacredness of the fire (let’s not forget the Persian roots of the Mithraic cult), a concrete manifestation of a spiritual presence.

Let’s start now, in an ascending scale, with the interpretation of the various degrees of initiation as symbolised on the rest of the mosaic floor.

This bird appears in various contexts on many iconographic scenes and cultic objects. This degree symbolises the need for the neophyte to strip himself of any form of personal pride. In this initial phase, the adepts of this grade performed the function of servants, assisting during Mithraic feasts (fig. 5). At this stage, it was also important to be able to harmonise within oneself – aided by intelligence, the psychic currents of opposite polarity (male and female). The symbol of Mercury’s caduceus refers to this.

In the Mithraic mysteries, the term Nymphos referred to the ‘chrysalis’ or the ‘larva’ of a bee. Here the neophyte is beginning his inner metamorphosis from ‘worm’ to ‘chrysalis’ and eventually to bee (or butterfly). The symbol of the snake, which is also associated with this grade, has the same symbolic value. While the first stage was related to the element ‘air’, this one is linked to the element ‘earth’. This stage involves a test of purification in order to awaken ‘spiritual love’ as the best guide in the inner journey. For this reason, this initiatory grade has been related to the image of Eros (love) and Psyche (soul-butterfly) as found in the Mithraeum of Capua (fig. 6). Venus is related to both love and bees. 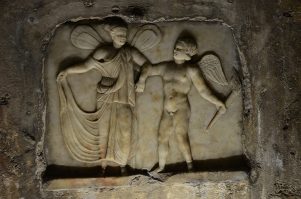 As attested in Tertullian’s writing De corona and also in a mural from the Mithraeum of Capua (the image discussed can be seen in the Mithraeum of Santa Maria Capua Vetere), the neophyte is offered a crown which he has to reject. This grade refers to the idea of renunciation of worldly success and the commitment to the inner battle. While rejecting the crown, the neophyte is invited to repeat the ritual formula ‘Mithras is my only crown’. The soldier renounces the ‘material’ crown in order to fully embrace the metaphysical battle between the forces of light and darkness.

It is likely that this was the first degree of initiation proper, while the previous three referred to probationary stages (as accepted disciples). At this stage the initiate, as symbol of rebirth to a new life, received a ‘new’ name. The initiates of this degree were in charge of the ceremony of the ‘ritual fire’ and formed a separate hierarchy with their own temple (Leonteum). They performed ritual purifications through incense offerings. Fire is seen here as the symbol of eternal life, light and the invisible sun. 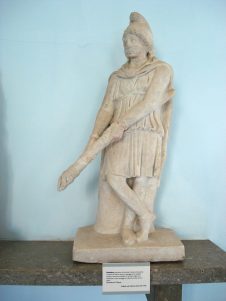 The fifth degree is often represented by the figure of Cautopates (fig. 7). His symbol is the owl and he presides over sunset. He is seen holding a burning torch pointing downwards, to show to the initiate his next test, the entrance to the underworld. This world is the hidden world of psychic and unconscious forces. This is the astral world of the occultists of which the initiate must become fully conscious and learn to master. This initiation relates to the ability to see and to act in the darkness (inner and outer). Apart from the nocturnal symbol of the Moon, another attribute of the Perses is that of a silver key which opens the ‘doors of the underworld’. 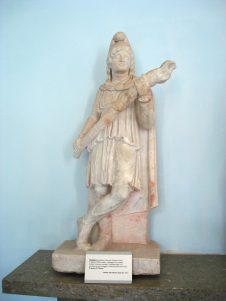 6.Heliodromus-Courier of the sun (symbols: seven-rayed crown, torch, whip – God/Planet: Sun – Metal: Gold)
The descent into hell is followed by the ascent to heaven. The seven-rayed solar crown symbolises the power of spiritual ascension as indicated by the torch-bearer Cautes (fig. 8). In some images the adept is seen ascending towards the sun on a solar chariot while lashing the horses. The whip as an attribute of this sixth degree symbolises complete self-mastery. This initiation occurred at dawn when the cock crowed. The rite was presided over by the Pater (the hierophant of the mysteries), who placed the ‘solar crown’ on the head of the initiate.

We find frescoes (fig. 9) where the Paters are depicted seated on a throne holding the sceptre (symbol of magical/spiritual power) and a parchment (symbol of knowledge). In the Roman Tradition the god Saturn, who presided over the Golden Age, is also the origin (Pater) of the divine genealogy. The sickle here symbolises the reaping of time itself uncovering thus the dimension of the eternal which is achieved only by the highest initiates.

A fitting and final symbol associated with the seventh degree is that of the mysterious Leontocephalus (fig. 10). The lion-headed body of the adept is entwined (seven times) by a snake. He has four wings on his back (mastery over the four directions of space)and he holds two keys (life and death, silver and gold)and a sceptre.