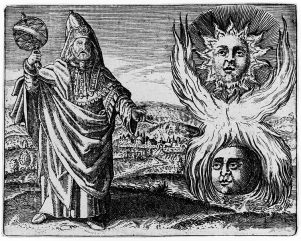 The Western esoteric tradition has its roots deeply embedded in a distant past. An important part of this ‘tradition’ has been preserved in the so-called Hermetic teachings also known as Hermeticism.

In this article I am going to highlight some basic aspects of the Hermetic teachings focusing especially on its magical aspect. The main sources of Hermetic magic can today be found in the Greek Magical Papyri, a body of papyri dating from 100 BCE to 400 CE, which re-appeared in Egypt in the 18th Century.

Hermeticism was an eclectic synthesis of differing metaphysical, philosophical and magical perspectives which were in existence around the beginning of the Common Era in the eastern Mediterranean world.
At that time the Hellenised city of Alexandria had become the centre of this Hermetic synthesis where the Egyptian cult of Thoth and the Greek cult of Hermes had been united into the new cult of Thoth-Hermes.

At a cosmic level, the Egyptian God Thoth (Tehuiti) symbolised the mind and memory of the Demiurge (Creator) and at the human level he was connected with the various faculties of the mind, its discerning as well as its analytical qualities. Thoth was the patron of magic because he was the embodiment of intelligence (human and divine), while his Greek counterpart, Hermes, the messenger of the Gods, symbolised the “dimension” of the mind as the intermediate level between the human and the Divine. Hermes also came to represent those intellectual and eclectic qualities (in the human being) that were characteristic of the Hellenic spirit and that allowed the birth of the Hermetic tradition.

To confirm the importance of the ‘mind principle’, we find in the Emerald Tablet the following precept: “Use your mind to its full extent and rise from Earth to Heaven, and then descend to Earth and combine the pow¬ers of what is above with what is below. Thus you will win glory in the whole world, and obscurity will leave you at once.”

The Hermetic student has to be able to oscillate between the subjective spiritual realms (of the mind “above”) and the objective material realms (those “below”) wherein the forms and theories can be tested and perfected.

What is stressed here is the fact that Hermeticism is a science and an art at the same time; that is why in this tradition we find a philosophical-theoretical side (see for instance the Corpus Hermeticum) and a magical-practical side (as recorded in the magical pa¬pyri). In antiquity the two branches worked together. The magical tradition was merely the operative branch of the philosophy which is more analytical and illustrative.

The basic operating theory of Hermetic magic is dependent on a kind of “natural dualism”. There is a higher world (of the Gods, deamons, angels etc.) and a lower world (humans). There is however a “natural” connection between the two. For the Hermetic magician, true knowledge and power were often revealed from an ‘outside’, invisible (divine or semi-divine) source. Acquisition of true knowledge depended on a ‘revelation’ which came through regular contemplation and prayer and more specifically through practice of magical control.

Within the context of magical control, magic has been defined as the art of causing changes through the agency of ‘spiritual creatures’ rather than via directly observable physical means. The main skills of the magician therefore consisted in constraining and controlling these ‘spiritual entities’ using the spoken and written word, sigils, talismans, sacrifices, divination, etc.

The Greek magical papyri are witness to the different ways in which the human being sought to approach the unseen. In them, we find jumbled together practices which belonged to three separate but interrelated categories: religion, the Mysteries and magic. All these modes of communication with the ‘invisible’ existed side by side. Some were practised in secret and some were public. Some aimed at the highest human initiation (i.e. spiritual immortalisation) while others aimed at the subjugation of lower spirits for the gaining of worldly objectives (love, lust, money, etc.)