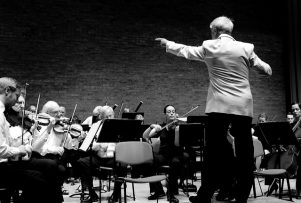 Though some people are aware that Mozart was a Freemason and many know that his opera The Magic Flute is a Masonic allegory, it is less well known what Freemasonry is and how central it was to Mozart’s life and work. According to the great Mozartean scholar Alfred Einstein, however, “the consciousness of his membership of the Order permeates his entire work.”

Freemasonry at the time of Mozart was an idealistic movement that aimed at transforming society by bringing about a profound change in the human being. It was based on the mystery traditions of antiquity such as the cult of Isis and Osiris in ancient Egypt and the Eleusinian mysteries of ancient Greece. Both of these traditions centred around the theme of death and resurrection and the discovery of the immortality of the soul, a theme which is also central to Freemasonic ritual. In the latter, the candidate for initiation passes through trials and undergoes a ritual death and rebirth.

Mozart was introduced to Freemasonry in 1784, at the age of 28, and became a member of the Viennese lodge ‘Beneficence’.  Shortly afterwards he introduced his father, Leopold and his fellow composer Josef Haydn to the Order and both became Freemasons. Most of his friends, patrons and mentors were also members. They all shared an ideal of a more egalitarian society in which the inherited privileges of a rich minority would be consigned to the past, religion would be freed from the shackles of superstition and science would serve humanity in a world guided by wisdom.

In The Magic Flute this ideal society is represented by Sarastro and his fraternity of initiates which the Queen of the Night (she of the famous aria) seeks to destroy. The story describes how the hero Pamino passes through ordeals to gain admittance to the brotherhood and everything is transformed by love and forgiveness.

It was not only in The Magic Flute, however, that Mozart expressed his Masonic ideas and sentiments. There are several other overtly Masonic works: Masonic Funeral Music, a cantata (K.623) designed for the inauguration of a Lodge, another entitled The Mason’s Joy and several others. The music played in Masonic rituals (mostly using wind instruments) was typified by a noble simplicity. According to the Freemason L.F. Lenz, “the purpose of music in the ceremonies is to spread good thoughts and unity among the members… [and] to inculcate feelings of humanity, wisdom and patience, virtue and honesty, loyalty to friends, and finally an understanding of freedom.” This style of music can be clearly heard in the ‘March of the Priests’ and Sarastro’s second aria in The Magic Flute.

There are many other works by Mozart which display Masonic characteristics. According to Katharine Thomson, J. and B. Massin, and other Mozartean scholars, there are certain musical symbols that indicate the presence of Masonic themes: the key of E flat, which was typically used in Masonic rituals as it is the easiest key for wind instruments; parallel thirds and sixths, slurred notes (indicating legato playing or singing) and dotted rhythms (often used to simulate the knocking of the candidate at the door of the temple).

Once one begins to see Mozart as the idealist and Freemason that he was, his music begins to take on a new power and depth. In all of the above pieces we can hear Mozart’s own avowed desire “to change men’s hearts through his music, to win them for an understanding of the ideas of the Enlightenment” (K. Thomson). These Masonic sentiments are clearly expressed in the words of the three boys in The Magic Flute, like a chant of longing that still resonates today: “Come down, O Peace, return into men’s hearts. Then earth will be a paradise again, and mortals will be like gods.”