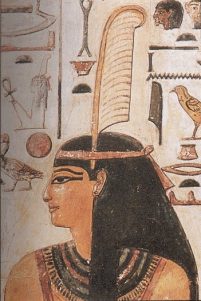 It is a commonly held view that ‘the Egyptians had no philosophy’ and that philosophy began with the ancient Greeks. However, some of the major Greek philosophers, including Thales, Pythagoras and Plato, recognised their huge debt to the sages of Egypt for their knowledge and ideas. Plato, for example, spent 13 years studying with the Egyptian priests at Heliopolis.

The difficulty scholars today have with this is that we have no records of a discursive Egyptian philosophy, in other words, philosophy in the form in which we are used to thinking of it today. But according to Pierre Hadot, author of Philosophy as a Way of Life, philosophy was seen in a very different way in the ancient world to the way it is perceived today. It was characterised, he said, by two formulas: learning to live and learning to die. In other words, it was eminently practical, on the one hand and metaphysical on the other. We find both of these poles in Egyptian philosophy: their ‘wisdom literature’, or moral philosophy, dealt with how to live; and their ‘funerary texts’ concerned ‘learning how to die’.

One example of an Egyptian moral philosopher is Ptah-hotep, who wrote his book (The Wisdom) at the age of 110! According to Will Durant, Ptah-hotep is probably the world’s first philosopher (and perhaps the oldest too).

The principle on which the moral philosophy of the ancient Egyptians was based was called Maat. Maat was personified as a goddess, whose symbol was the feather. She represents the universal order of the Cosmos, the law of life. Human beings, too, are subject to this law: we must learn to live in accordance with the dictates of our higher intelligence, what the Greeks called Nous and the Egyptians Ba.

This principle of Maat resulted in a strong ethic of public service and responsibility, flavoured with an attitude of benevolence. We also see a concern for self-cultivation and an admirable humility which Ptah-hotep expresses as follows:

Don’t be conceited about your knowledge or about how learned you are, because art has no limits and no artist ever reaches perfection.

Regarding the second aspect of ancient philosophy – learning how to die – Plato refers to this more than once in his dialogues, when he refers to philosophy as a training for death (Phaedo 67e). Although we have a predominantly negative attitude to death today, it can also be seen in a positive light: as an opportunity to come into contact with the invisible world, where truth, beauty and other archetypes, may be perceived more clearly. This was definitely the view of Socrates.

Thus, although texts like The Book of the Dead undoubtedly deal with the passage from this world to the next, there are parts which were clearly written for the living. That is to say, it is possible to enter into contact with invisible realities while alive; it is not necessary to wait for the imperious necessity of death. This process of attaining to higher knowledge was known in antiquity as ‘initiation into the mysteries’; and philosophy itself, as Algis Uzdavinys has pointed out, “was regarded as a mystery into which one may be initiated.”

To be initiated is to die to one’s attachment to the physical body (Khat) and to the personal ego (Ab), in order to be reborn as a spiritual being (Akh, symbolised by a bird). In this way, the Book of the Dead can be seen as a book of metaphysical philosophy which teaches the philosopher to pass through the trials of initiation.

As the Greeks knew well, the immortal divine nature is achieved not only through theoria (contemplation) but also through praxis (practice), the ordering and harmonisation of one’s life, the purification of defects and impurities – so that one’s heart will become as light as the feather of Maat, in the Egyptian symbolism. Hence the importance of moral life as the indispensable basis for higher wisdom.

In this sense, to philosophize is not only to think, it is primarily to go towards the knowledge of being, of what truly is, symbolised in Egypt by the Light.