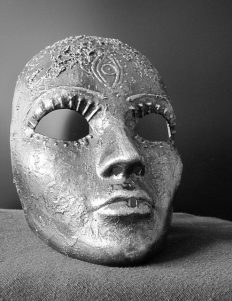 The making and use of masks dates back several millennia. It is one of the most ancient and widespread art forms – one which has captured the imagination of countless people around the world. On a recent visit to Portobello Market in London, I found myself confronted by a remarkable display of antique Balinese masks. I felt that these fascinating and mysterious artefacts had so much to reveal to the passers-by.

The mask seen as an ancient mode of sacred art brings us closer to the world of the ‘Gods’, of mythology, of religious ceremonies, of initiatory and secret rites. Although the general trend, when looking at an artefact, is to engage with it only through the “aesthetical eye”, when we deal with sacro-magical art, there is more than meets the eye. Many of the objects used in magical ceremonies, like masks and costumes, are not meant to be ‘beautiful’ according to aesthetic standards. In fact their purpose is often very ‘functional’, a very profound type of functionality.

Masks may serve to better mediate with ‘spirits’ and the elemental powers of nature (as used in shamanic rites) or to induce cathartic states of being (as used in the Greek mystery plays) or to conjure up ancestral influences (as used in ancient funerary rites).

In all these instances, the art form has a very practical purpose, that of acting as a focusing lens, for the release or transformation of ‘magical power’. The wearer of the mask, by identifying and ultimately merging himself with the power represented by the mask, loses his individuality, to become an instrument of collective (i.e. tribal-ancestral) or divine ‘presence’.

The sacred mask often symbolizes and expresses a ‘type’- a cosmic type that corresponds to a divine function. This is why it is regarded as a real being, it is treated as if it is alive and it is handled only after certain purification practices have been performed.

I hope to find myself browsing again soon among the market stalls of London.