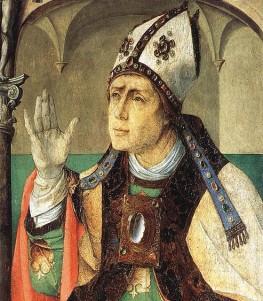 Aurelius Augustinus was born in the city of Tagaste (Numidia), in the year 354 A.D. His mother, a devoted Christian later to be known as St. Monica, tried to instill the faith in him from an early age, which the young Augustine resisted, considering it to be intellectually confused. His family invested a large part of its fortune in his education. In 370 he moved to Carthage, one of the major cities of the Empire in those days, to receive training as a statesman, and he soon distinguished himself as a great rhetorician. There he devoted himself passionately to study and a dissolute life, on which he was later to reflect profoundly in his “Confessions”.

In his continual spiritual quest, he was initially attracted to Manichaeism, a form of religion that proposed Good and Evil as universal principles battling for control of the Cosmos. However, this form of thought was unable to provide satisfactory answers to his preoccupations and, after a series of vicissitudes, he decided to abandon it. For nine years he ran his own school of grammar and rhetoric at Tagaste and Carthage. It is said that in this city he read Cicero’s “Hortensius,” a work that led him towards philosophy as a rational way of understanding the world.

He went to Rome where he set up a school. Later, in Milan, he practiced as a teacher of rhetoric. There he was very well received, especially by St. Ambrose, the bishop of the city, whom Augustine had been longing to meet, because of his renowned authority on the subject. He frequently attended his sermons, which, with their brilliant intelligence, made a deep impression on his heart and mind. Plato led him, as he himself said, to the knowledge of the true God, as did the teachings of Plotinus, the founder of Neoplatonism, who had died in Rome a century before St. Augustine’s birth. This School showed him a way of mystical union with God through the exercise of pure intelligence.

It was the constant influence of his mother and his passionate reading of Plotinus that gave him his ultimate direction and led him to appreciate the figure of Jesus Christ. But it was a strange event that occurred during his stay in Milan that was to change the course of his life radically: Augustine and his friend Alipius received a visit from an African called Ponticianus, who told them of the life of St. Anthony and the story of how two men had been converted after reading his life. Deeply impressed by these words, he went out into the garden with his friend, in a state of a deep inner agitation, and sat under a tree. Suddenly, he heard a child’s voice singing a song with the words: “Take up and read, take up and read…” Then, in Ponticianus’s account, he took up the book of St. Paul’s Epistles which was lying on the table and, as he read one of its passages, felt the unmistakable call to conversion to Christianity, which he accepted as the only true philosophy, and devoted himself thereafter to the ascetic life.

In 388, following the death of his mother, he returned to the city of his birth where he began to teach by discourses and writings and to live in spiritual retirement. In 391 he was ordained a priest by the bishop of Hippo, Valerius, who appointed Augustine as a preacher. Later, St. Augustine was made Valerius’ coadjutant bishop and, on his death, succeeded him as bishop of Hippo. There he also performed the judicial tasks that in those days came within the remit of the bishops.

In Hippo, as he had done in Tagaste, he lived a communal life in spiritual retirement with St. Alipius, St. Evodius and St. Posidius, amongst others. It was at this time that he laid down, together with the renunciation of possessions and property, a number of rules that he demanded of the religious living with him. This contributed to regularizing the communal way of life, which had been approved by the early Church as instituted by the Apostles. These ascetic principles of the religious life are known as the Rule of St. Augustine.

As Roman Africa was at that time being besieged by the Vandals and he was now close to death, he asked his disciples to cover the walls of his room with the texts of the penitential Psalms and to recite them in his presence.

Against the Academicians and On Free Will, St. Augustine attacked the Skeptics, Manichaeans and Pelagians, doctrines that, in his ceaseless quest for truth, he had turned to in his youth. Against the Academicians, On Happiness, On Orderand Soliloquies are the first works to have come down to us. He also wrote a treatise on Music, On the Master and On the True Religion – one of his most important philosophical writings. In Soliloquies, he speaks about the desire for knowledge: “I desire to know two things only, God and the soul. Nothing else? Absolutely nothing else.”

In his work “Confessions”, he exposes the excesses of his youthful conduct and his personality as a thinker begins to emerge, the main subject of the work being purely theological speculation.

Faced with the historical fact of the fall of Rome, its sacking in 410 by the troops of Alaric and the fact that some blamed this on the success of Christianity – since there was a belief that the strength of the Roman Empire was linked to the triumph of paganism – St. Augustine wrote his famous work “The City of God”. In it he speaks of two cities opposing one another until the end of time in a struggle for power: one is human and the other heavenly and spiritual. The City of Man, which at that moment in history was represented by Rome, could never, by its very definition, be the city of the Spirit, since it belonged to the human dominion: the dominion of Caesar, as against the dominion of God. In “Retractions”, with the same sincerity as in his Confessions, he analyzed the errors of judgment he had committed throughout his life. These provide an essential guide to the understanding of his work. Through his sermons and writings, St. Augustine helped in an important way to deepen the Christian faith, occupying an indisputable place among the Church Fathers.

In St. Augustine’s thought, theological inquiry is not merely objective, but must become an internal process within the man who carries it out. He takes the best of the preceding patristic and the fundamental theological concepts, and enriches them with a human touch that they had not had before, turning them into elements of inner life and linking them to the proper concerns and needs of man, with a sound basis in rational inquiry.

He sets out the need for rational inquiry in Christian speculation, as Plato did in Greek philosophy, although, unlike the latter, he places it in the field of religion. With his thought St. Augustine helped to consolidate the Platonic tendency of philosophy until the resurgence of Aristotelianism in the 13th Century.

In keeping with Plato and the Neoplatonists, St. Augustine upheld the belief in the universals, since the things that we see and perceive are mere shadows of reality. Thus, behind the apparently real world, with the light of intellect we can discern the ultimate reality, which, as Plato said, is clear, mathematical and incorporeal. For St. Augustine, man searches in the turmoil of his finiteness and moves towards Being – the only thing that can bring him happiness, which lies in wisdom; therefore his search through philosophy is indispensable for the necessary understanding and grasping of reality.

Faith, on its own, cannot fulfill the function of a Christian philosophy, given the incomplete and rudimentary character of faith. He maintains that knowledge is obtained both through the senses – the material world – and the intelligible world. The former is similar to truth and made in its image, while the intelligible world is true in itself. As in Plato, the knowledge of the intelligible world is acquired independently of experience. Divine illumination provides man’s mind with the necessary rules of judgment to form the images and concepts that the mind needs to reach the truth.

In view of the above, we can see that one of fundamental characteristics of St. Augustine’s thought is that it places philosophy within a religious perspective. His search is directed constantly towards God and the soul. For him, God is in the soul and reveals Himself in the innermost parts of the soul itself. To seek God means to seek the soul and to seek the soul means to turn in upon oneself and recognize oneself in one’s own spiritual nature, to confess. If man does not search for himself, he cannot find God. It is the structure of the inner man that makes the quest for God possible; man, being made in the image of God, can seek him, love him and refer to his being.

This is the formula of his experience. For St. Augustine, the three aspects of man are manifested in the three faculties of the human soul: memory, intelligence and will, which constitute the life, the mind and the substance of the soul. He teaches that truth cannot be created by man, but is to be found within each individual, at the precise moment when he succeeds in hearing the teachings of the “Inner Master”, as the transmitter of the word of God. So it would be in the dominion of the soul and heart of each individual that the dominion of the City of God, the invincible dominion is to be found.

The history of man and humanity revolves around the choice between matter and spirit. This struggle is between the kingdom of the flesh and the kingdom of the spirit, the earthly City and the City of God. Both cities have been mixed since the beginning of humanity’s history and will be so until the end of time. It is up to each individual to recognize to which of these realms he belongs.

It has to be pointed out that this City of God, arising from the ashes of ancient Rome, is a process of continuity and resurgence, inspired by the Greeks, particularly by Plato, who achieved in the philosophy of Plotinus a renewed mystical-spiritual aspect that represented a milestone in the history of human thought.

For St. Augustine, Christianity represented the old promise of the Heavenly City referred to in the Sermon on the Mount. But notwithstanding the fall of Rome and the introduction of Christianity, which St. Augustine saw as a conquest of the Divine City over the City of Man, the barbarians continued their incursions and, when they imposed on the ancient city the new feudal structures based on the use of force, the Christians saw more clearly still the need to look again towards that Heavenly City of which Augustine speaks.