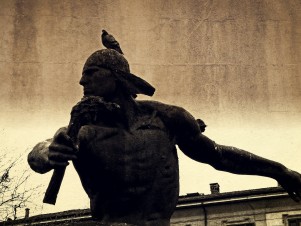 Many of us associate the term ‘hero’ with a brave character mostly from stories, myths and historical events: a very special person who is able to overcome weaknesses and fears, displaying great courage and other virtues such as sacrifice and strength. We might even think about a sort of warrior who is victorious, saves others and fights bravely against fiery creatures. Adding to this idea, a hero prototype has been built such as Heracles from Greek mythology who was known as the strongest of all mortals; Joan the Arc as a classical one, whose youth wasn’t an impediment to helping the French victory in the 15th century, and more contemporary ones like soldiers or cartoon heroes. The latter are strongly advertised by the media and promoted in children who usually identify with their powers and strengths. Movies such as Star Wars, Matrix and Lord of the Rings show characters playing that role which has been analysed as a hero type. Also many fairy tales include a character who is challenged until the resolution of the story occurs in which an achievement is accomplished.

Joseph Campbell, an American writer on mythology, approaches this topic by identifying 3 stages: departure, initiation and return. According to him, a hero goes through these progressive stages in order to reach what is understood as apotheosis, the achievement of a realisation. First there is a call to an adventure and an initial struggle to accept it, because making a choice brings its consequences. Once the adventure is accepted, the hero takes a step into the unknown, a new territory that makes demands on him and tests his skills and knowledge. On that journey, he is likely to encounter supernatural aid, talismans and even helpers, so the hero isn’t necessary alone. Finally, a reward or victory represents the accomplishment of his quest. Returning home appears to symbolise the closure of the adventure but also the start of a future one. Think about the characters mentioned before and how movies or books have made used of this concept to produce their work.

Amongst the variety of heroes we know, there is a special element that characterises them and one that we can admire and be inspired by today: the heroic spirit. This is an inner attitude and disposition towards facing an adventure and crossing the threshold to reach the unknown, no matter how dark or dangerous this new place is or the possibility of meeting a beast. When trials are given to him to test his ability, his character and his mental qualities, his fighting isn’t only happening on a physical level but also a battle is taking place in his mind. It is similar to Arjuna in the Indian text of the Bhagavad Gita, when overcoming his struggle of indecision before the moment of battle. A heroic spirit is present when one is encouraged to accept the call and dive into the uncertainty of a new adventure and by doing this, one is given the opportunities to obtain inner growth. This realisation is often held by a mentor who gives the advice and training needed for embracing the journey, as Krishna did to Arjuna.

Nowadays, a new hero is needed and that heroic spirit can be reborn in the individuals who nurture the potential of discovering a quest and strive for it. The archetype described by Joseph Campbell and also shared by Carl Jung is a hero who is ready to go out, do good deeds and overcome the fear of changes while reaching within himself a source of courage and wisdom. Although we don’t have labyrinths to be conquered, princesses to be rescued, or villages to be saved from an ogre, the adventures and circumstances we witness in the world do require a heroic spirit to make a change. And that change is possible when one awakens and realises the power of choice. Only then is the dream of freedom and the symbolical rebirth experienced.