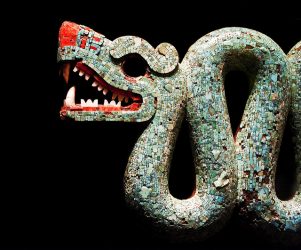 The Aztecs – or rather the “people from Aztlan”, a translation from the Nahuatl word ‘aztecatl’ – are largely still a mystery for us. Their strong and determined character, their practical sense and the value they ascribed to the strength of will enabled this people to develop a highly advanced culture and conquer vast parts of Central America.

The Aztec Empire began to rise in the 13th century and centred around Tenochtitlan (today Mexico City). At the time, Tenochtitlan was the biggest and most important city in the world with around 500,000 to 1,000,000 inhabitants – comparatively much bigger than Paris at the same time, with its 70,000 inhabitants. It was said to be a green oasis, a city full of gardens and flowers, floating on a big lake. The sacred was a very important aspect for the Aztecs, which was mirrored in the geography of their cities: temples were to be found everywhere as they wanted to accommodate the gods as guests on Earth.

The myth goes that before settling down, the Aztec people had wandered for 157 years in search of the right place to build this city. It was not until they detected the sign they had been searching for (an eagle picking up a snake from a cactus) that they decided to come to rest. This symbol can still be found in the national flag of Mexico today.

Every civilisation adopts part of its knowledge and traditions from the previous civilisation in the same place. This was also the case for the Aztecs, who got parts of their knowledge from the Toltecs – about whom we know even less.

Huitzilopochtli, the god of warfare, was their principle deity, which was reflected in their character. However, war has to be understood in a twofold sense: on the one hand it is about the external war we know, conquering peoples and territory. On the other hand, and just as – if not more – important, the internal war, which refers to the conquering of oneself, the triumph of the soul over matter. For an Aztec, to be a warrior was an attitude and a mindset, a posture vis-à-vis life rather than a mere act of death and destruction. The warrior is an enemy of comfort and slowness, of those vices that keep us from developing and moving forward. And at the same time he is a friend of courage, endurance and drive, pushing to develop the values of the soul.

The Aztecs had a strong belief in the immortality of the soul, which explains why minimal value was given to material life. The sacred and the invisible were always more important. This also demonstrates how they integrated Huitzilopochtli as their principle deity into their everyday life. The other two most important gods were Tetzcatlipoca (the god of the smoking mirror) and Quetzalcoatl (the feathered serpent).

Nature, signs in nature and dreams played an important role in the way the Aztecs decided to lead their lives. They drew much of their knowledge from nature itself, thus developing a highly elaborate calendar system which was split into a solar calendar of 360 + 5 days and a ritual calendar of 260 days. Within this, they had a clear vision of the task human beings have to fulfil on earth.

The Aztecs have left us with a fascinating heritage and knowing how little we have really discovered and understood about it leaves us wondering how much more there is to explore….