The High City of Troy 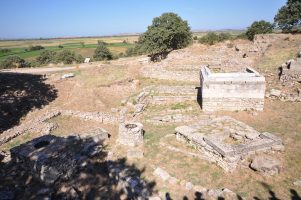 Long ago at the dawn of history, on a distant seashore near the sacred Mount Ida, stood a marvellous city, the walls of which were built by the gods themselves. It was there that Poseidon and Apollo did their penance labouring for king Laomedon on the orders of the great Zeus. The city was Ilium or Troy, the jewel of the world before history began. The Father of Gods and Men honoured it with all his heart.

However, history unfolds in cycles, and the inhabitants of Troy succumbed to pride and forgot about virtue. The decline of the mighty city began when king Laomedon failed to honour his promise to pay Apollo and Poseidon for their work. To punish him, Poseidon sent a sea-serpent, which was killed by the greatest hero, Heracles. But the king did not honour his promise again, this time to Heracles. So, the hero destroyed the city and only the youngest son of the king survived – Priam. He rebuilt Troy, but only to meet his end there when destiny brought the war of all wars. By the naïve choice of Priam’s son, Paris, and his abduction of Helen, the divine will to relieve the all-nurturing Earth from the burden of humans was put into motion. The Trojan War began and Troy’s fate was sealed.

Thousands of valiant warriors on both sides, the Trojans and the Achaeans, clashed in the war. It lasted ten long and hard years, full of wrath, loss, grief, rage, despair, pride and glory… Gods kept intervening on the battlefield. Warriors showed overweening ambition and masterful skills. Hubris overcame them and death came to many: Hector, Achilles, Helenus, Patroclus, Sarpedon, Ajax, Memnon, Orestes… Those who did not meet their end under the walls of Troy had many misfortunes afterwards. Finally, by a ruse – the wooden horse, an apparent gift to the gods filled with hidden warriors – the Achaeans managed to enter the impregnable walls of the city. Troy fell. Thus ended the age of heroes.

In every end, there is a beginning. Following his higher mission, the young Trojan prince, great-hearted Aeneas, son of Aphrodite, escaped the burning city with his aged father on his back, the sacred palladium of Athena in one hand and his son clinging to the other. Thus, the high city, pure Troy, with its experience, values and potential for the future, was saved. Together with some remaining Trojans, Aeneas built a fleet and led his companions to the new homeland.

There are many more elements to the myth, many more heroic acts to remember and symbols to interpret. The story of Troy, a high city, a place of great heroes, a centre of a civilisation, has been reverberating throughout history. It became a chronological marker for the start of history and the ideological source that shaped the ancient Greco-Roman world. Many ancient Greek cities traced their origins to the aftermath of the Trojan War. The story tells that Aeneas reached Italy and his descendants founded Rome.

The archaeological city of Troy, on the Hisarlik mound in north-west Turkey, is an incarnation of the myth, and still keeps some secrets. Many prominent figures paid homage to it, including Xerxes, Alexander the Great, Julius Caesar, Augustus, Agrippa, Hadrian, Constantine and Julian.

Although the city was abandoned in the 7th century CE, the story of Troy continued to inspire. It became an important source of origins in medieval Europe. Between the 7th and early 12th centuries, several different claims to Trojan ancestry were made by European noble houses, royal dynasties and national chroniclers. Geoffrey of Monmouth described in his History of the Kings of Britain the story of Brutus, a great-grandson of Aeneas, who founded Troya Nova (New Troy), which developed into Trinovantum or modern London. The first ever printed book in English was the Recuyell of the Historyes of Troye (1473).

The idea of a high city, where justice, virtue and wisdom dwell, continues to call to those who learn from history, both mythical and actual, and are willing to build a high city in the here and now.