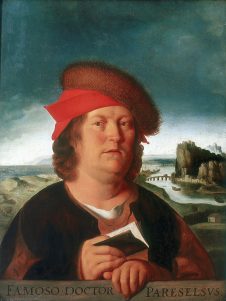 As we are at present living in the throes of a worldwide disease, it might be interesting to look at other possible causes than the ones we are familiar with from the news bulletins.

This esoteric perspective comes to us from a late medieval/renaissance doctor, alchemist, astrologer and general philanthropist (lover of humanity), known by the name of “Paracelsus”. He was born in 1493 near Einsiedeln in what is now Switzerland. “Brought up among the fir-cones”, as he himself put it, he was initiated into many of nature’s secrets by his father, a doctor and keen researcher into the medicinal properties of herbs, plants and roots. He also accompanied his father on visits to mines and mining villages, where he observed both metals and the diseases of miners, a subject on which he was later to write a book.

In this short article I cannot, unfortunately, enter into the details of his life, fascinating as they are. So I will recommend you a book, The Life of Paracelsus, by Dr. Franz Hartmann. It paints a picture of a man who was dedicated to the task of alleviating human suffering by his art and who, in order to do so, carried out extensive and deep studies into Nature and the human being. He taught that there are Four Pillars of Medicine, namely Philosophy, Astronomy, Alchemy and Virtue. He gained many enemies throughout his life as he frequently railed against the apothecaries and ‘sham-physicians’ of his day. He died at the age of 48, perhaps at the hand of an assassin.

“The highest foundation of medicine,” said Paracelsus, “is Love”; but alongside this must be Knowledge of the visible and invisible aspects of life. “The physician should know the processes of nature, the invisible as well as the visible man”… “A physician who wishes to be rational must know the constitution of man… he should have an understanding of [the sciences] by the power of interior perception, which cannot be taught in books, but must be acquired by art”.

The third foundation of medicine, alongside love and knowledge, is to serve Nature: “A physician should be a servant of Nature, and not her enemy”. “Nature is a great physician” and the doctor should assist Nature in taking its course, not try to divert it into contrary directions. The Paracelsian doctor does not see himself doing battle with Nature. Disease is in many cases the result of not living in accordance with Nature’s laws. Therefore, the solution to disease is to understand those laws and readapt to them, not to try to prevent this process of readjustment.

The Five Causes of Disease

1) Astral influences. These are the influences coming from the planets and the stars. They can affect human beings collectively and individually, physically and psychologically. Individuals may be affected by the astral influences of a particular planet (or astrological aspect) when this is connected with their personal birth chart. These influences can cause disease in susceptible bodies and can also bring about cures, if managed by a doctor well versed in astrology.

This type of operation is based upon the science of ‘signatures’, the network of correspondences that exists in nature between the planets and the different species and forms in nature. However, says Paracelsus, it is not just a matter of looking up such correspondences in books, but above all being able to “read in the book of Nature”, to “see” the correspondences between macrocosm and microcosm, by journeying into the interior of our own being and opening our inner eyes.

2) Impurities, poisonous substances and internal obstructions. In modern language this refers to the build-up of toxins in the system, whether from the food and drink we ingest or from our polluted environment. The following quotation from Paracelsus shows the clarity of his thinking in this respect:

“Man is much more subject to diseases than animals in a state of liberty, because the latter live in accordance with the laws of their nature, and man acts continually against the laws of his nature, especially in regard to his eating and drinking. As long as his body is strong, it may expel or overcome the injurious influences… but a time will come when disease will be the result, because the organism requires a period of rest and a renewal of strength to expel the poisonous elements. If the physician attempts to prevent such an expulsion of poisonous elements he attempts a crime against Nature.”

3) The misuse of organs or injurious influences. This refers especially to the abuse of physiological powers, e.g. over-eating, over-drinking, excessive sexual activity, resulting in problems such as obesity, diseases of the stomach, liver complaints, impotence, sexually transmitted diseases, etc. These can be cured mainly by ceasing to indulge in the injurious activity. “Nature”, said Franz Hartmann, “is a patient mother that often forgives the sins committed against her, although she cannot forget them.”

4) Psychological causes. These can be internal or external. There are diseases caused by our own negative states of mind, such as fear, stress, anger, hatred, etc. And there are others caused by negative psychic influences around us or sent directly to harm us by invisible enemies. While many people nowadays would put the latter down to medieval superstition, Hartmann gives several examples of such ‘invisible attacks’ which were known to him personally. These may not be conscious ‘curses’, but merely thoughts and intentions wishing us harm. However, such negative energies will not affect honest and upright people, says Paracelsus, whose virtue acts as a luminous and defensive shield.

In the case of the internal psychic causes, these are widely accepted today, and the illnesses caused by them are known as “psycho-somatic”. There are some illnesses which do not have any physical cause at all, only a psychological one (e.g. stress), and if this were to disappear, the illness would also disappear.

Paracelsus refers to these emotional-mental states as “Imagination”. He says: “Imagination is the cause of many diseases; faith is the cure for all. If we cannot cure a disease by faith, it is because our faith is too weak; but our faith is weak on account of our want of knowledge; if we were conscious of the power of God in ourselves, we could never fail.” Faith, for Paracelsus, is not blind religious faith, but an unshakeable inner conviction in one’s own powers, based on knowledge.

5) Spiritual causes created by disobedience to the law of God (“Karmic” causes). In this case, there may be no evident cause for the disease and it may be caused by what in the East is called “karma” – previous actions carried out in this life or a previous one. In order to discover such causes, the doctor would need to have the “interior perception” referred to earlier. As for the cure, in such cases there is none, except to be patient and wait for the karmic causes to be worked off. If the doctor, due to ignorance of these causes, tries to fight the disease at all costs, they may end up doing more harm than good, by fighting against Nature.

Paracelsus is an interesting mixture of scientific doctor, homeopath, naturopath and faith healer. As a result, he is often criticized, at least in the UK, as being a pseudo-doctor, charlatan, etc. In German-speaking countries, however, he is well respected. He is often considered to be the precursor of homeopathy (a form of which he used to cure the plague), but at the same time he knew the value of hygiene. Homeopathy is often vilified today, but hygiene is praised. Some of his “miraculous” cures have been historically authenticated. Could his five causes of disease be applicable today?