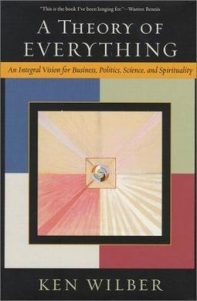 The American thinker Ken Wilber is well known in some circles, such as transpersonal psychology, yet despite being the author of 25 books he is barely mentioned in academia. His unconventional approach, which tries to integrate opposites such as science and spirituality has made him difficult to classify and has brought him into conflict with mainstream thinking.
In his work A Theory of Everything (2000) he proposes an “Integral Theory”, a theory which he developed by analysing and synthesising many different models of reality in a wide range of fields, from medicine and psychology to politics and theology. It is a way of looking at things from a variety of angles, while remaining open to adding new dimensions or changing one’s theory in order to improve it. As Wilber himself says in an interview conducted by Hector Gil in Esfinge magazine, “my best talent is probably pattern recognition.”
One of the models of his Integral Theory is shown in the diagram below known as the Four Quadrants, Tetra-Evolution or Aqal Model. This comprises two dualities of interior-exterior and individual-collective. This model can be used as a method for solving disputes and disagreements, for example on a political level. 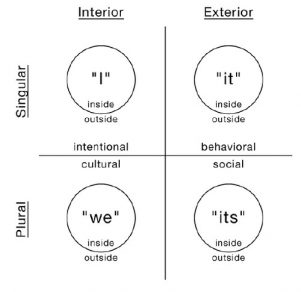 In politics we find two apparently antagonistic positions: liberal (left-wing) and conservative (right-wing). Liberals have a tendency to attribute the causes of human suffering or happiness to external factors, such as social institutions, economic conditions, material well-being, environment and technological development. Conservatives, on the other hand, will usually say that such causes are to be found in the individual, in factors such as individual choice, morality, values and meaning.
What Integral Theory does is propose a third way which, instead of opposing the two positions, tries to integrate them. The method for doing so is to start from the principle that both the inner and the outer approaches are equally real and important, accepting that there is both a need to improve external conditions and for the individual to develop inner strength and resourcefulness. However, what often happens is that neither side will see the value of the other and they become locked in a never-ending and sterile battle.
In the same way, Wilber distinguishes between “subjective” and “objective” views of reality and affirms that both are equally valid and important. As an example, we can look at our own actions or those of others and we will see that there are always both subjective and objective elements involved. A person’s actions cannot only be interpreted in terms of their objective actions; subjective intention is equally important. Likewise, meaning, which is a subjective factor, has an impact on the way we live, to the extent that, if someone has no sense of meaning in their lives, they may commit suicide. Conversely, when someone finds a sense of purpose, their outer appearance may become transformed and they become more interesting and attractive outwardly, as a result of being more fulfilled. Victor Frankl, in Man’s Search for Meaning, explores this issue through his own experiences as a concentration camp survivor. 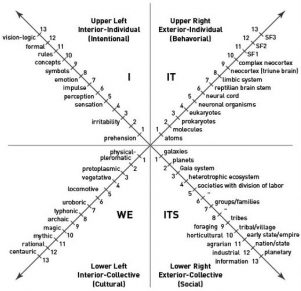 Wilber does not believe that all positions are equal, however. Indeed, one of his more controversial claims is that hierarchies are a fact of nature which cannot and should not be denied. There are hierarchies in the development of consciousness in all the kingdoms of nature, including the human. Thus, some human beings are at a higher level of conscious development than others, without this meaning that the outlook of those at a lower level should be rejected as invalid; on the contrary, all levels should be integrated within a greater whole. It is an idea which could give rise to an elitist view of human beings, but because it is based on a principle of integration (i.e. that all the levels are valid) this is theoretically avoided. One could imagine, though, that people who consider themselves as belonging to one of the higher levels would consider themselves superior to those on a lower level.

To explain his theory, Wilber uses the model of the “holon” and the “holoarchy”. A holon is a whole which becomes part of a greater whole, like an atom within a molecule or a molecule within a cell. The larger unit integrates the smaller so that the greater whole is more than simply the sum of its parts; each new level adds a new dimension.

By way of example, if we look at human societies, we will see that some people view things from a tribal point of view, which Wilber terms “ethnocentric”, considering their nation or ethnicity to be superior to others. Other people, with a wider outlook, view things from a larger humanitarian perspective. However, Wilber proposes that those with a wider perspective should not reject those with a narrower perspective, but integrate their point of view and try to widen it by enlightening and educating them. Unfortunately this generally does not happen today, because those with a more enlightened worldview are afraid of being considered elitist if they try to educate the less enlightened, so they opt to denigrate them instead – which makes them not only elitist but also selfish and narcissistic, because they are more concerned with preserving their own image as enlightened people rather than with helping others. We can perhaps see here why Wilber has made himself unpopular in some circles.

This horror of hierarchies arose, according to Wilber, from the hippie mentality of the 60s. However, it is not hierarchy itself that is bad (the word, after all, means “sacred order”). The problem is the confusion that has arisen between what he calls hierarchies of development or growth, and “dominator hierarchies”, which are the ones that people rightly rebel against. A hierarchy of development is, for example, a hierarchy of states of consciousness, which go from more limited and exclusive ones to broader and more inclusive perspectives on reality. In his view of the evolution of human consciousness, Wilber classifies this development as going from the egocentric-egoistic posture, through a tribal (group) ethnocentric level to a multicentric orientation of universal care: from “me” to “us” (but against the “non-us”) to “all of us together”. Consequently, the higher someone rises in a hierarchy of growth (growth of consciousness), the more inclusive that person becomes; whereas the higher someone rises in a dominator hierarchy, the more privileged and exclusive they become. Confusing the two types of hierarchy and wanting to eliminate all hierarchies, however, shuts people off from the possibility of growth and supports the existing structures that seek to oppress and dominate people.

We can see an example of this in religions. Religions can become dominator hierarchies when they are taken over by unscrupulous people who use them for political ends. However, the original function of all religions, which are founded by highly developed human beings living in direct connection with God (the non-dual reality) in every moment of their lives, is, in Wilber’s industrial metaphor, to act as conveyor belts that can lead people from one level up to the next. On the lower level, according to Wilber, you have “social religions” in which people perform rites and fulfil obligations in a more or less mechanical way, hoping to win the favour of their God(s) who will reward them with good fortune and prosperity. On the next level up, the follower of a religion would try to integrate the moral teachings of the religion into their everyday lives and try to live them, rather than just conforming to the rules and rituals for appearances’ sake. Higher still would be the mystical union with God and the direct experience of the ultimate non-dual reality.

In this way, according to Wilber’s principle of integration, all religious forms (except the “dominator” forms, which are a distortion and negation of true religion) should be embraced and integrated as necessary stepping stones to the higher, more real levels of direct experience.

To sum up, Wilber’s Integral Theory offers a way of resolving the apparent contradictions of life in a more harmonious way than is being done at present. If we had a more truly integral approach to life, we would probably be able to solve many of the serious and apparently intractable problems that face humanity today.
Ken Wilber’s own view of his work was expressed to a friend, Raquel Torrent, in the following terms: “I write so that people will fall in love with their soul, their evolutionary path, and can see themselves in the mirror of consciousness” (as quoted in Torrent’s article in the Spanish magazine Esfinge https://www.revistaesfinge.com/).