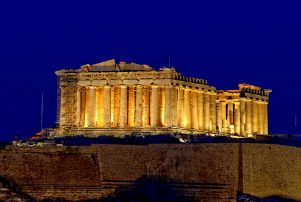 This article is the result of a trip I recently made to Athens, Epidaurus, Olympia and Delphi. Walking through its stunning archeology, pausing at monuments, and gazing spellbound at its sacred temples, I couldn’t help but ponder what might have inspired such a civilization.

Nursing at her bosom, Greece nurtured such an altitude of knowledge and amplitude of wisdom that it came to be called the cradle of Western Civilization. Herodotus, regarded as the Father of History, lived here. Solon envisioned the origins of Democracy here. Socrates, for some the Father of Philosophy, taught in its marketplaces. Phidias the sculptor created his monumental masterpieces to adorn its temples. Democritus conceptualized a cosmos built of atoms. Hippocrates, whose oath modern doctors still swear by, practiced here. Aeschylus, Euripides, Sophocles and Aristophanes molded theatre in its arenas. Pythagoras, Plato and Aristotle established discipular schools here, and their insights became the foundation of modern mathematics, philosophy and science.

So influential was the Greek tradition in almost every sphere that even when the entire Greek Peninsula had become a province of Rome, it was Greek art, culture, language and learning, that was absorbed by Rome, leading the Roman poet Horace to remark, “Captive Greece captured her rude conqueror.”

As the ruins came to life, a rich fabric of the daily activities of an ordinary citizen began to vividly weave itself together in my imagination, and my understanding of the Ancient Greek tradition deepened. Let us travel back in time, to retrace the steps of a fictional protagonist, Demetrius, on what might have been a typical day.

It is 400 BCE. Athens has gained political power, economic growth and cultural heights. Democracy has taken root and most of the city’s inhabitants live in the polis. The agora is the centre of social, commercial and civic activity. It is a holiday today, and Demetrius is strolling through a busy market. He passes several majestic public buildings that function as seats of government, and numerous beautiful temples dotted all over the agora, devoted to Apollo, Aries, and Zeus, where throngs of people enter with offerings. The Bouleuterion is quiet today. It is the place where offenders are tried in front of 500 citizens, who vote on their guilt or innocence.

Demetrius makes his way to the Monument of Heroes: 10 majestic bronze statues stand, signifying each of the 10 tribes of Athens. Every citizen belongs to one of these clans, membership of which confers rights and privileges as well as duties and obligations. Looking up at the imposing, handsome statues, Demetrius is reminded of each one’s courage, and commitment to the ideals of Truth and Justice. On the pedestal below the statue of his clan, he reads pertinent notices: lists for military conscription, public honors, and of particular interest to him, the introduction of new legislation. He has come to partake in the lively discussion around the advantages and disadvantages of a new law, and to listen to the voices of those whom he respects. As he makes his way home, he weighs all that he has heard, for he knows that a society is only as just as the people that constitute it. How he would cast his vote if called upon, is a responsibility he must take very seriously.

That evening Demetrius, with his wife and young son, finds his way up the Sacred Path to the Acropolis, the higher city, to participate in the holiday festivities. Built elevated on a hill, this spiritual heart of the city is a collection of magnificent temples, dominated by the resplendent Parthenon dedicated to the goddess Athena, the patron goddess of the city. It is an architectural poem, an ode to beauty, proportion and harmony. Its 46 white marble columns, 10 meters high, tower over the polis below, and are visible from every part of the city. The moment your gaze travels upwards, they serve as a constant reminder of the sacred.

Demetrius and his family make their offerings to the colossal, glittering statue of Athena, and then move towards the Theatre of Dionysus, the arena dedicated to the God of Wine and Enthusiasm, and perhaps the most loved deity in Athens. They have watched many performances here; the tragedies of Sophocles and Aeschylus, and the comedies of Aristophanes. Demetrius chuckles at the memory of a particular comedy that he attended in his youth, which had made wry and mocking references to Socrates. He wondered if Socrates was fully aware of the rising antagonism towards him. But he concluded with admiration, that for a man like Socrates, nothing would deter his pursuit of truth.

The family seats itself amongst seventeen thousand spectators. Today, there is a musical competition, and Demetrius looks forward to acknowledging with cheers and tribute, the performances that will elevate the audience to an experience of Beauty, for that is understood to be the primary purpose of Art.

His son’s chronic cough surfaces, and Demetrius exchanges a worried glance with his wife. Perhaps next week he will make the journey to Epidaurus to visit the Sanctuary of Asklepios, the God of Healing. There among priests and medical practitioners, his son would benefit from the hot springs, the cold baths, and the purifying ceremonies. With the enforced rest under eagle-eyed observation, and the administration of medicinal herbs and roots, Demetrius feels hopeful that his son will be healed, for he knows well that a healthy, robust body is vital, as a fitting receptacle and aid for a clear, elevated mind.

He wanted his son to be well for the Sacred Games at Olympia. He remembers the last games, 4 years ago with pleasure. The games had grown in prestige with the passing of time, and were part of a religious festival in honor of Zeus. Heralds were sent all over Greece to announce the festival dates, and military battles ceased in an Olympic truce, to guarantee safe passage to travelers arriving from all over the Mediterranean basin. The Games began with the lighting of a torch at the altar of Hera, the rising flame a symbol of purification and illumination, a result of right effort. Treasure was offered by each city-state at the Temple of Zeus, that housed Phidias’s masterpiece, a 43-foot-high statue of Zeus in ivory and gold. Although the statue was breathtaking, Demetrius was captivated by the friezes depicting the 12 labors of Heracles. He remembered fondly explaining to his son that a hero is one who overcomes his human condition, dedicating his life to something greater than himself, using not just strength, skill and daring, but intelligence, patience and humility.

Artistic competitions were a big part of the games, and poets, sculptors, musicians, and painters also showcased their works, competing for prizes. These were called the Musical Games, named for the Muses, the inspiring nine Goddesses of the arts, such as literature, music, dance, and drama. And artists were celebrated not just for their craft, but for their ability to transmit the aesthetic ideal as purely as possible.

At each of the sporting events, athletes competed in the nude as a symbol of purity, and as a tribute to the gods, for the gift of a healthy body that served as a temple for a healthy mind. Poets composed paeans for victors, and Demetrius had taken pleasure in pointing out to his son that while achievement was recognized, it was honor, fair play, and integrity that was gloriously applauded.

The various events included running, long jump, the discus throw, javelin, wrestling, and equestrian. But the chariot races were his favorite. As the thundering of the chariot wheels and the horses’ hooves mingled with the roar of the immense crowds, Demetrius felt a sense of shared kinship with his fellow Athenians, a bond of fraternity and belonging, a sense of identity and a rousing spirit of honor.

Let us leave behind Demetrius and his family, as they partake of the public feast at the close of the evening. For a moment, let us ponder the life and times of Ancient Greece. Let us marvel at the minds that envisioned cities whose very design and function gave its citizens purpose, inspiration, and identity; the constant reminder to live up to the highest ideals, and a culture that fostered a connection with the sacred, through ethics, aesthetics, and metaphysics.

Perhaps my imagination paints an idyllic picture. But can we dare to emulate the men who sowed the seeds and watered the roots of trail-blazing ideas that flourished into a golden age of civilization?

Instead of looking outwards, let us look inwards, and reach for the higher city within ourselves, where lies the best of our human potential. Let us traverse the inner Sacred Path to reach an inner pinnacle, with perseverance, strengthening its foundation brick by brick, with heroic qualities: the daring to traverse the unknown, the courage of our convictions, and the steadfast commitment to lofty ideals. Let us build such a towering edifice on the golden pillars of Truth, Justice, Goodness and Beauty, as beacons to illuminate our direction forward, and as a shrine that strengthens our shared identity and purpose: a universal fraternity that strives together, reaching for the stars.