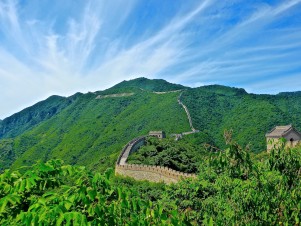 The world is changing fast and countries are like other living beings: being born, growing, and even dying. A good illustration of this could be seen at a well-prepared exhibition at the British Museum called Ming Dynasty: 50 years that changed China.

The Ming Dynasty (1386 – 1644) was an interval of native Chinese rule following the Mongol Yuan Dynasty (1271-1368), which was so named by its founder, Kublai Khan, after a phrase from the I Ching: da zai qian yuan, meaning “great is the primal-ness of Heaven”. This speaks of the right to rule, but if it is not done justly and well, the Mandate of Heaven is lost.

Kublai Khan was the grandson of Genghis Khan, founder of one of the biggest empires in the world, the Mongol Empire. At its peak it extended from the Sea of Japan to Eastern Europe, with its furthest boundaries in Korea at one end and Hungary at the other. This vast unified and later safe area, known as Pax Mongolica, provided an economic opportunity and connected the Eastern and Western worlds through a trade route known as the Silk Road. With the establishment of Yassa (Great Law) the Mongols could regulate peaceful trading and travelling while also allowing complete religious freedom, allowing Buddhism, Islam and Christianity to spread around the new areas.

At the end of the Yuan Dynasty, China was going through epidemics, droughts, flooding and discrimination against the Han people. At one point the Yuan court ordered 150,000 peasants to go and work on the embankment of the Yellow River. Around the empire a prophecy was spread: ‘A stone man with one eye will provoke the Yellow River against China.” Workers uncovered the one-eyed statue and the revolution began. An ethnic group, the Han Chinese were organized through the group called the Red Turbans, which were affiliated with the White Lotus, a Buddhist secret society. The most prominent rebel was Zhu Yuanzhang, a descendant of a peasant family and educated by Buddhist monks. He led the overthrow of the Yuan Dynasty and in 1368 became the founder of a new dynasty, the Ming.

The Ming Dynasty is considered to be one of the more stable Chinese dynasties. With the Yongle Emperor, meaning ‘perpetual happiness’, the new capital was established in Beijing with its new palace, the ‘Forbidden City’. It was built in 14 years with the labour of one million workers. Trade had already existed, but now it expanded on a different scale. Over the course of 30 years, admiral and diplomat Zhen He, trading with a fleet of 62 large ships, escorted by more than 200 smaller ships, carrying 26,000 men, helped to extend Chinese maritime and commercial influence as far as East Africa. Between 1405 and 1408 the Yongle Emperor also commissioned a team of 2,169 scholars to compile The Yongle Encyclopedia, covering subjects ranging from astronomy to medicine and yin-yang theory. The complete text exceeded 3.7 billion words. The dominant philosophy in China had become the Neo-Confucianism of Chu Hsi (1130-1200), who argued that there was an immaterial principle Li, which gave form and essence to things, and a critical study of all things would reveal this single, underlying principle.

It was 1644 and corruption and conspiracy had been taking over the court. The peasants from the north were climbing over the Great Wall – it was time for a new dynasty, the mandate of heaven had been lost again.