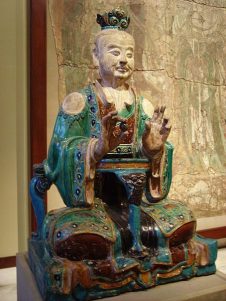 In the beginning, so the Chinese legends say, there was only chaos and from this chaos emerged Yin and Yang, two primordial opposing forces which, when they interacted with one another, brought forth the universe. The continuing interaction of these two opposites produced the constant change that characterizes life.

For Chinese thought, it is necessary to accept the changing nature of life, not blindly, but with intelligence, and adapting to it and working with it, in the same way that a farmer works with nature, planting seeds in the appropriate season and harvesting crops when they are ripe. This would also be the mark of the sage and of the wise ruler. As John M Koller explains in his book Asian Philosophies, “The Sage ruler must understand this so that, with a mind cleared of all passions and prejudices through self-cultivation, he can respond spontaneously and harmoniously to any problem that arises.”

Much has been made of the supposedly irreconcilable differences between Confucianism and Taoism, but perhaps they can be seen as just another manifestation of Yin (Taoism) and Yang (Confucianism), which are ultimately only aspects of the one Truth that is beyond them both, just as the Tai Chi symbol includes the Yin and the Yang.

Chinese civilization over the last 2000 years appears to be most influenced by Confucianism: from 637 C.E. onwards it was compulsory for all public schools to display an effigy of Confucius, and a system of state examinations, the high value given to learning (which was regarded more highly than social class) and the importance of self-cultivation and family relationships are all particularly Confucian in character. Other aspects of Chinese culture, such as the magical aspects of Chinese medicine and the martial arts, or those well-known paintings where a tiny human figure is shown on the top of a mountain, surrounded by clouds in a vast landscape, reveal the influence of Taoism and the great value it gives to Nature, of which the human being is only a small part.

But we must also not forget the influence of Buddhism. During the Ming Dynasty, most famous today for its exquisite “Ming vases”, the Minister of War of one of the emperors was a Buddhist monk and Buddhism permeated the Imperial Court.

These three cultural expressions are summed up by Koller as “three ways of attaining the self-transformation and perfection of human beings:
– The Daoist way: by following the Inner Way (Dao) of Nature.
– The Confucian way: by cultivating human nature and the social virtues.
– The Buddhist way: through meditative insight into the mind.”

The Confucian ideal of the perfect ruler was of someone who cultivated his own conduct, identified with the interests and well-being of the state, who stimulated the arts and was friendly to foreigners. This was the so-called “Great Principle”, in opposition to the “small principle” according to which each individual merely looks after his own interests.

Despite the vehemently anti-Confucian stance of Mao Tse Tung (Mao Zedong) and the Cultural Revolution led by the “Gang of Four”, many of these Chinese cultural characteristics, such as respect for education and the importance of family and social relationships, have remained in place to this day.

From the early 20th century, the movement to modernise China in line with Western values and technology let to a downgrading of Confucius and Confucianism. But in recent years there have been moves to rehabilitate Confucius, culminating in a speech by President Xi Jinping in 2014. Now there are more than a thousand “Confucian Institutes” and “Confucian Classrooms” in 120 countries around the world.

Many Western observers see this as a cynical move by the Chinese government based on the fact that Confucius taught respect for authority. But as philosophers in the classical tradition we can at least be happy that the timeless teachings of Confucius are once again being made available to millions of people across China and the world.