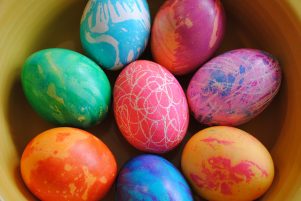 As we approach Easter, the representations of this festivity are increasingly appearing all around us; bunnies, painted eggs and rabbit icons which are all the traces of an ancient celebration dedicated to the Goddess Eostre. St. Bede –  a lifelong monk who studied history, theology, chronology and poetry and dedicated himself to understanding the Anglo Saxons and the Christianisation of Britain – said that the month of April was known as “Eostremonth”, the month of beginning attributed to a celebration of Eostre.

The Egg and the rabbit symbols were in fact representations of fertility, which is a quality of Eostre. The celebrations in honour of the goddess took place in spring in a pagan festival called “Ostara”, which is another name for Eostre in the Germanic languages. According to Jacob Grimm, who was a German philologist, “ostar” is an expression used for the movement towards the rising sun. Ostara was the divinity of the radiant dawn, of upspringing light that brings joy and blessings.

Welcoming the first Sun in the spring was one of the ancient celebrations which still takes place today. Eostre or Ostara time is a time of spring when we see the change of the season, the warming of the earth and a renewal and rebirth in nature. Hence, it may lead us to feel an urge to start a new process of change in ourselves or to rejuvenate our homes.