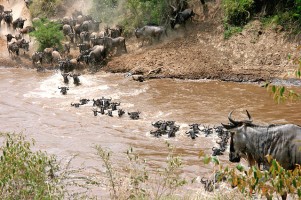 The world record for animal migration is held by a bird called the arctic tern; its journey, starting within weeks of hatching, will take it from northern Greenland, down the western coasts of Europe and Africa, across the Antarctic ocean to the south pole – a total of around 11,000 miles. Less than a year later, it will cover the same distance again on its return journey home.

But it’s not only the mileage that’s impressive. How do English swallows know the route to their winter feeding grounds in South Africa, 6,000 miles away and then manage to find their way back again in spring to breed, often to the very same place where they nested in the previous year?

The biologist Rupert Sheldrake, who deals with this and other questions in his book Dogs that know when their owners are coming home and other unexplained powers of animals, gives another example to illustrate the extraordinary navigational skills of migratory animals. “Baby green turtles that have hatched on the beaches of Ascension Island, in the middle of the Atlantic, find their way across the ocean to the ancestral feeding grounds off the Brazilian coast. Years later, when the time comes for them to lay their eggs, they then make their way back to Ascension Island, only six miles across and over 1,400 miles away, with no land in between”. Their ability to navigate, he says, is one of the great unsolved mysteries of biology.

“More amazing still”, continues Sheldrake, “is the instinctive ability of young birds to home to their ancestral winter quarters without being guided by birds that have done it before. European cuckoos, raised by birds of other species, do not know their parents. In any case, the older cuckoos leave for southern Africa in July or August before the new generation is ready to go. About four weeks later, the young cuckoos find their own way to their ancestral feeding grounds in Africa, unaided and unaccompanied.” How do they do this?

The hypothesis currently accepted by most biologists is that these migrating animals have an innate genetic program which directs them along a certain route using the orientation provided by the sun, moon and stars, a magnetic sense and, in some cases, the sense of smell.

Although there have been successful experiments to show that all these factors play a part, the theory is not entirely satisfactory. One of its flaws is that the heavenly bodies are not always visible, either due to cloudy conditions or, in the case of fish or marine turtles, because they are underwater; another is that the Earth’s magnetic field is constantly varying and therefore cannot be relied upon. As for the sense of smell, this may help when an animal is nearing its destination ¬– as in the case of the atlantic salmon ¬– and can ‘smell’ its home waters, but not when it is thousands of miles away in mid ocean. Moreover, birds like the albatross do not follow a set route and are able to return home from anywhere. Like many of these animals, they just seem to know the way intuitively.

The main alternative theory for explaining the navigational ability of migratory animals is the so-called ‘goal-oriented’ system. This proposes that there is a ‘pull’ from the destination which enables the animal to ‘know’ where to go. The animals can also use other navigational aids, in addition to this innate sense – such as the position of the sun, moon and stars or the earth’s magnetism – but can still find their way without them.

A number of experiments support the ‘goal-oriented’ theory. One of these, conducted by the Dutch biologist A.C. Perdeck in the 1950s, involved capturing migrating birds en-route to their destination, flying them by plane to a place off their normal course and seeing if they could still get there. Another ‘experiment’ happened by accident when a turtle was taken from Ascension Island to England in 1865. When the ship reached the English Channel, the turtle was looking unhealthy, so it was thrown overboard. Two years later it was caught again at Ascension Island, and recognized because it had been branded. So how did it manage to return?

It is also interesting to note that some so-called ‘primitive’ people – i.e. those more in touch with nature – also tend to have a highly developed navigational ability. “One of the most spectacular demonstrations of this ability was given by Tupaia, a dispossessed high chief and navigator from Raiatea, near Tahiti. Captain James Cook met him in 1769 on his first great voyage of exploration, and invited him to travel on board the Endeavour. During a journey of over 6,000 miles […] Tupaia was able to point towards Tahiti at any time, despite the distance involved and the ship’s circuitous route.” (Sheldrake, p.158)

What is the explanation for these remarkable abilities? David Attenborough, in his Life on Earth, says: “There seems to be no single answer: they use many methods. Some we are beginning to understand; some mystify us; and there may be some that depend on abilities we have not yet suspected.”

Rupert Sheldrake believes that the phenomenon can be explained through his theory of ‘morphic resonance’. He proposes that migrating animals are connected to their native beaches, feeding grounds or winter homes by what he calls ‘morphic fields’. “These fields have an inherent memory transmitted by morphic resonance which causes a given organism, such as a migrating bird, to resonate with previous migrating birds of the same kind. Thus, when a young cuckoo sets off from England towards Africa, it draws upon a collective memory of its ancestors. This memory, inherent in the morphic field of its migratory path, guides it as it goes, giving it landmarks, feeding grounds and resting places. This collective memory also enables it to recognize when it has arrived at its destination.”

Esoteric tradition uses the term ‘group soul’ to (partially) explain this phenomenon. All the knowledge of past individuals of a group of animals goes into a collective mind which processes the information and makes it available to all present and future animals of that group.

Butterflies are a case in point. Every summer, the ‘painted lady’ butterfly arrives in Britain from North Africa to breed – a non-stop journey of 1,000 miles. On arrival, they reproduce immediately and it is this second generation that will make the return journey to Africa in autumn. In other words, it is not the same butterflies that fly back, but new ones which have not travelled the route before, but nevertheless know the way.

The study of these and other marvels of nature (including the nature of the human being) can make us more aware that natural processes are far from purely mechanical, automatic and wholly explicable by a materialistic view of life which likes to see everything in the most prosaic terms. There are mysteries in nature, phenomena that cannot be wholly explained by reductionist science. This is not to say that they have no explanation, or that they cannot be understood; but sometimes the more appropriate vehicle of understanding is the intuitive mind.

Thus, the poetic and imaginative spirit also has something to contribute to these matters, so I would like end by quoting from a recent book on the migrating swallow (A Single Swallow, 2009) by the wonderfully named ‘Horatio Clare’, who followed the migration route of the swallows from South Africa to Wales: “Before I went I loved them [swallows] aesthetically: they were beautiful and quick. Now I also admire their strength and their persistence. It’s quite something to live as swallows do on the wing, taking perpetual risk. It’s not just how they live, it’s the emotional way that they live: their fearlessness, their joie de vivre and their adventurousness that I love. They were so majestic, graceful and had such a dash about them that I felt privileged to be with them.”

Projecting his own feelings, the materialist might say, but why not? Man is part of nature and nature is part of us. We and the swallows are one.