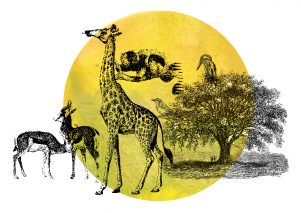 This creation is whole and complete.

From the whole emerge creations, each whole and complete.

Take the whole from the whole. The whole yet remains, undiminished, complete.

I come from the limited world of business governed by ever-changing rules of finance and management. Hence, I have no formal qualification to write a scientific article about the unlimited natural world of the Animal Kingdom. My philosophy study, however, has led me to investigate various aspects of ecology and sustainability and this article is a result of my observations and reflections.

No one sows the seeds, no one provides the water, no one gives nutrients, no one generates waste, no one cures diseases. But even in the absence of anyone to manage or control, the eco systems of forests, consisting of diverse flora and fauna, work as a self-sustaining and self-balancing system. This illustrates one of the most important eternal laws of Nature, described by traditions worldwide as a law of Life itself: the principle of Unity. Everything seems to be interconnected, inter-related, everything is a result of a cause and has an effect on the whole, everything is One.

Conditioned by the construct of time and space, it might be difficult for human consciousness to grasp this Unity, but we can easily see it being played out within the animal kingdom. Every animal seems to be a part of the design, as a self-balancing and self-healing component of the system. Disease rings the warning signal, of the need to restore harmony. All the diversity is integrated intricately to form a single body, just like a human body; a single functioning unit comprising body parts including internal organs, muscles, tissues, nerves, capillaries, cells, etc. For last few years, I have been spending much of my time at Vanvadi Forest near Mumbai. I observed that there were too many spider webs all around. After some reflection, I realized that as soon as the monsoon recedes the populations of insects multiply and it is the best time for spiders to build their webs to feast. If not for the spiders, the insect populations would have had a devastating effect on the health of the forest plants, which would have also resulted in an adverse impact to animals and humans. And so spiders restore harmony!

It is noteworthy to point out the vast diversity of insects, birds, mammals, reptiles and fish, in a seemingly limitless variety of colours, shapes, and sizes, adapted to different habitats and food habits. Perhaps, if all birds were exactly the same, eating only fruit, nesting only on trees and migrating all together to just one place, they might not have been able to survive because of the drain on natural resources, such as the over-consumption of fruit. In this manner the entire habitat would be impacted – either positively or negatively, causing a long lasting multiplier effect, much beyond the animal kingdom. An excellent example of this is the re-introduction of wolves in California’s Yellowstone National Park after an absence of nearly 70 years, resulting in the most remarkable “trophic cascade” altering even the course of the region’s river. To know more, watch How Wolves Change Rivers on Youtube.

In an integrated system, each component has a particular role and purpose, based on which nature efficiently provides the needed resources; neither more nor less, always at just the right time. In The Vision of Natural Farming, Bharat Mansata shares that “There is on Earth, a constant inter-play of six paribals (key factors) of Nature, interacting with sunlight. Three are: soil, water and air. Working in tandem with these, are the three orders of life: vanaspati srushti, the world of plants; jeev srushti, the realm of insects and micro-organisms; and prani srushti, the animal kingdom. These six paribals maintain a dynamic balance. Together, they harmonise Nature’s grand symphony… a mystic grace!” (1) One small change can have severe consequences for the whole system. Nothing is random; everything has a link preceding it and succeeding it.

However, this cause and effect relationship is not clearly visible most of the time as we may not always be able to connect the dots. If an unaware person is shown a caterpillar, a pupa (chrysalis), and a butterfly, he would think that the 3 are completely different beings, without any co-relation whatsoever. A caterpillar eats leaves and crawls, a pupa remains locked for weeks, without food, undergoing internal transformation and a butterfly drinks nectar and flies. And yet, these are just three stages of development in the lifecycle of a single being.

During an eco-study trip, a guide told us about the Lotka Volterra model of predator-prey relationships. It was explained that as soon as prey increases, predators also increase. The increase of predators, however, leads to the fall in the number of prey, which in turn leads to the fall of predator populations. This is the balancing cycle observed time and again in the animal kingdom. There are many such cycles in nature that enable corrections when there is an imbalance. This is essential to maintain the Unity, the cohesion of the ecosystem, as no single species can survive alone. Interestingly, sometimes this balancing is aided in mysterious ways through camouflage and bio-mimicry, either to protect against a predator, or to become better equipped to hunt prey.

It is noteworthy that the Living Planet Index of 2018 shows an overall decline of 60% in species populations between 1970 and 2014. (2) And when it is accompanied with habitat loss, extinction can conceivably become irreversible. In some cases, species make an attempt to revive by adapting to a new environment, which results in long-term changes in the genetic material of the population. New species emerge therefore, and examples include the peppered moth, three toed skinks, nylon eating bacteria, pesticide-resistant insects, Darwin’s finches, and many more. Over millennia, animals have continuously co-evolved.

“Nature has linked all parts of her empire together by subtle threads of magnetic sympathy” wrote one of the adepts, and it is “too well, too mathematically adjusted,” for man to interfere with her arrangements without suffering the consequences. (3)

It would be foolish then, I believe, to think that such a natural model would not apply also to humanity, since we too are a part of nature’s system. How then, can we count on unlimited productivity based on an infinite notional resource (money), on a planet limited by finite real resources? Given the times, the majority of us are cogs in the wheels of an economic system of a materialistic world that is increasing its size and speed with little concern for the natural harmony and unity of Nature. This imbalance is visible on all fronts; be it social, ecological, political, or spiritual. And corrections might manifest in any number of different forms from a virus to a protest, from a war to a natural disaster.

Over the last few hundred years, it is evident that human beings have promoted the idea of control, consumerism and mass scale production. To facilitate profits arising from scalable standardized production, and to satiate the rising demands of exponential population growth, a preference of predictable homogeneity has been instituted. Beyond superficial variety, most of us have become conditioned to an artificial uniformity; be it our lifestyle, attire, language, belief systems, food habits, education or work pursuits. It is easy to see today that communities, rich in culture and tradition, are diminishing; indigenous and tribal peoples are vanishing, as they become part of the mainstream. The homogeneity results in the non-acceptance of those who are different, and leads to fault finding and judgment, sometimes leading to even violent opposition.

But we must realize that the Unity expressed by natural ecosystems is characterized by diversity, which provides a holistic environment for the development of the potential of each of its components. It is important to recognize here that diversity is but a reflection of Unity, which we must restore, conserve and enhance on our planet, and within ourselves. A flourishing diversity is an indicator of health, the vibrancy and richness of life, of Unity. Naturally, this leads to a degree of tension between the diverse components, but that’s exactly the key ingredient that maintains a dynamic harmony and propels growth and evolution. If instead, we force monocultures, promoting just one animal or plant, promoting just one thought or belief, at the expense of all others, the entire system risks collapse.